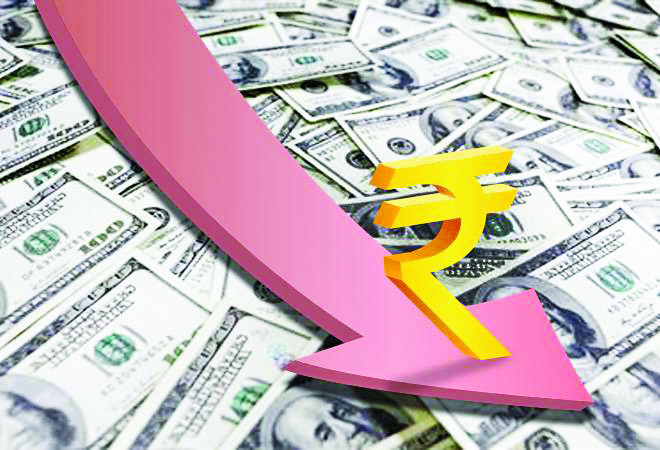 DROWNING: The rupee has reached its lowest ever level against the dollar, closing past `72 per dollar in recent trading sessions

such as ready-made garments have been declining for more than a year, falling over 12% during the April-August period. The US has challenged India’s export subsidy regime at the WTO, making it difficult for the government to come out with more sops for exports. Which means, exporters are not quite celebrating.
Besides, GST-led disruptions, coupled with a weakening of major currencies across emerging economies, have restricted exporters’ ability to capitalise on a weaker rupee. The yuan has depreciated by 5.24% against the USD since January 2018, while the Indonesian rupiah has depreciated 6.81%, says an analyst with India Ratings.
What next
There are only five major emerging market countries running a basic balance deficit and India is one of them.
According to ABans Group chairman Abhishek Bansal, the rising current account deficit (CAD) is adding to the pressure. “We may see an undesired knee-jerk reaction on import bills as rising fuel prices inflate prices of goods and services in the long run,” he says.
While seeking to play down the currency volatility, Union Finance Minister Arun Jaitley had said that the government would cut “non-necessary” imports and ease overseas dollar borrowing restrictions for manufacturers, among other measures.
Gold and electronics imports, in particular, are expected to take the primary blow. According to RBI data, the CAD stood at $15.8 billion (2.4% of GDP) in the April-June quarter of 2018-19 compared to $15.0 billion (2.5% of GDP) in the same period last year.
While the government is contemplating measures to ease the pressure on the rupee, among them a separate dollar window for oil-marketing companies, it will keep a watch on external factors — higher US interest rates, further increase in crude prices, trade talks between US and China, the US mid-term elections in November and politics at home as India heads into state elections and the 2019 general elections. “If any of these factors take a turn for the worse, a further fall in the rupee cannot be ruled out by the end of this year,” says Goenka of India Global.
A further slide in the rupee has inflationary implications. “If the rupee remains under pressure, the RBI could be forced to hike rates citing risks to inflationary expectations and second-order impact of a weak currency,” says Rao of DBS Bank.
If the RBI increases interest rates, the cost of money in the banking system will rise, money supply will come down and demand in the economy is likely to be hit. This will affect growth, especially at a time when the GDP growth had picked up to 8.2% in the June quarter, the highest in two years.
In his memoir ‘Advice and Dissent: My Life in Public Service’, former RBI Governor Y V Reddy narrates an incident. When asked, “How can the (RBI) Governor intervene in the forex markets to influence the market-related exchange rate without knowing what is the real value?” His response was, “I cannot define God. I can recognise the Devil. We can see excess volatility or an out of alignment exchange rate when we see it happening .”
What matters now is whether the government and the RBI have recognised the “Devil”.

Turbulence in the past
1966
The Indira Gandhi government devalued the rupee from 4.76 to 7.50 against the dollar, a depreciation of 57.5%, under pressure from multilateral agencies as the dollar-rupee rate remained constant amid a rise in foreign aid, drought and wars with Pakistan and China
1991
The rupee was devalued by 18.5% to 25.95 in a two-stage devaluation by the Narasimha Rao govt to tackle the foreign exchange crisis, inflation and possibility of a default on external payment
1998
The rupee depreciated continuously during the crisis period and reached a low of 42.76 per US dollar in August 1998, a depreciation of 16% in the wake of the Asian financial crisis and downgrading of India’s rating after the Pokhran explosion. The Reserve Bank stepped in and sold dollars, hiked cash reserve ratio (CRR), repo rate and bank rate, and reduced access for banks to export and general refinance facility
2008
The rupee depreciated sharply by 21.5% from 39.99 in end-March 2008 to 50.95 at end-March 2009 when the global markets were hit by the US mortgage crisis triggered by the fall of Lehman Brothers. The RBI announced a rupee-dollar swap facility and liberalised foreign borrowings to stabilize the rupee
2011
The currency depreciated by about 17% during August to mid-December of 2011, reflecting global uncertainties, especially the deepening Eurozone crisis. The RBI responded by deregulating interest rates on rupee-denominated NRI deposits and hiking the ceiling on FII investment limit on govt securities and corporate debt
2013
The rupee depreciated sharply by around 19.4% against the US dollar between May 22, 2013, when it stood at 55.4 and August 28, 2013, when it touched a historic low of 68.85 on the back of reversal in capital inflows, high CAD, deceleration in gross domestic product growth rate, high WPI inflation and large fiscal deficit
2018
From an intra-day high of 63.44 on January 2 this year, the rupee fell 15% to 72.98 against the dollar last week, a fall attributed to crude oil price rise, United States-China trade war, rate hike fears and weakness in emerging market currencies.