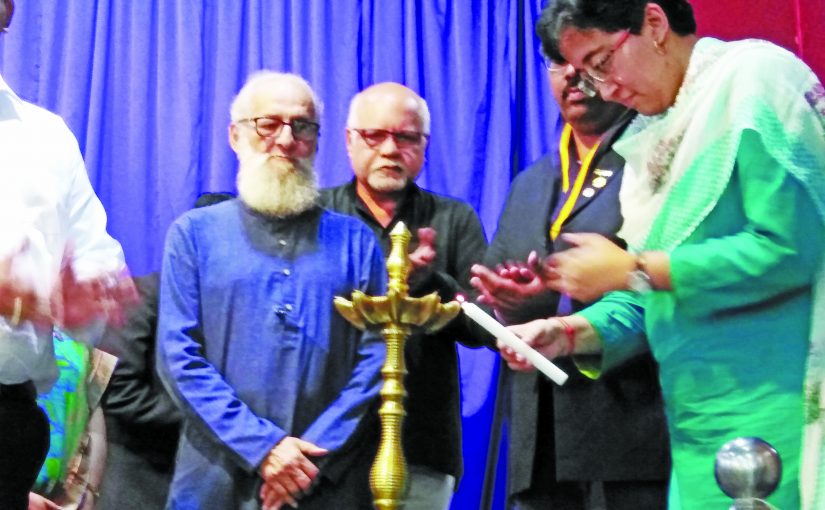 IGNITING THE MINDS OF GOVERNMENT SCHOOL CHILDREN: (top) Aam Aadmi Party’s Atishi Marlena Singh, educator and progressive politician in the making shows the way at the JCI Mapusa symposium on education; others in the pic are Goan educationists Padmashri Dr Suresh Amonkar and Prabhakar Timble, (above) media interaction after the meet at Bogdeshwa Temple conference hall in Mapusa

WOMEN like her are like a fresh breathe of air! Atishi Marlena. Atishi Marlena is the former advisor on Education Reform, Government of Delhi. She is the heart and soul behind the transformation of primary government education in Delhi schools. It took some simple straight talking accompanied by a before-and- after slide presentation by the visiting educator and Aam Aadmy Party representative, to win the hearts of the audience which had turned up to hear her speak at a JCI function at Bogdeshwar Hall in Mapusa on Gandhi Jayanti day on Oct 2, 2018.
Atishi is the woman who has played a key role in turning around a stagnant public school education system in Delhi to enviable status today. Plus, she added, “We have transformed the nature of government education in Delhi and the government gets a revenue of `50,000 crore instead of `33,000 crore now!” It is a story worth recounting for inspiration value in the rest of the country. For how can any government resist the idea of more revenue and that too over the table for all to see!