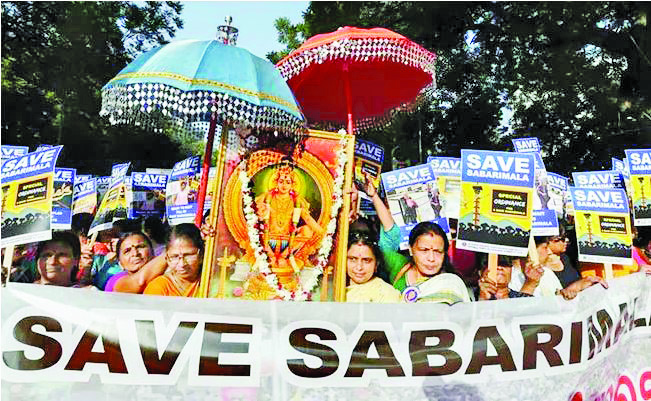 WOMEN: It may take years of sesitisation and education before women truly feel welcome at Sabarimala, but the Supreme Court’s verdict is an important first step

In the backdrop of women in media coming forward to fight for change — speaking out against years of patriarchy and ‘accepting’ unacceptable behaviour — it’s interesting to compare the ongoing fight to change tradition at Sabarimala. While the Supreme Court has ruled that women of ‘menstruating’ age cannot be denied entry, the protestors, many of them women, are fighting to preserve the centuries-old ban on the entry of women into the temple

Kerala’s Sabarimala temple opened on Wednesday evening for the first time after the historic Supreme Court verdict allowing women between the age of 10 and 50 to pray there. But amid huge mobilisation by right-wing groups opposing the verdict and incidents of violence, there was not a single woman in the contested age group present anywhere near the sanctum till the time of going to press.
The closest any woman in the 10-50 age bracket could reach was a point near the holy Pamba river from where pilgrims have to trek nearly 6km uphill to the shrine. A 45-year-old woman from Andhra managed to evade the “checkposts” put up at Nilackal, 20km from Sabarimala, by hundreds of belligerent anti-women activists. She crossed the Pamba river with a full police escort but decided against proceeding further after barely walking for 300 metres. The constant heckling and booing by dozens of bhakts belonging to the “Save Sabarimala” campaign unnerved the woman and her two young children.
There was a running battle between right-wing protesters and police at Nilackal, a major disembarkation point for pilgrims. Protesters tried to forcibly stop incoming vehicles to check if they carried women.
The pattern played out through the day: Lathi-wielding policemen would break up the protesters, who would soon regroup and move menacingly towards the road or hurl stones at the cops who would then advance. Three cars, including two hired by television channels, were damaged by protesters. The windscreen of a bus was completely shattered in stone-throwing. A police vehicle was also attacked.
The agitators didn’t spare even mediapersons who were stationed there. Women journalists who suffered injuries in the attack have been identified as Saritha Balan, Pooja Prasanna, Radhika Ramaswamy and Maushumi Singh. Police, who were clearly outnumbered, remained mute spectators earlier in the day.
Several protesters, including their leaders, were arrested. At Pamba, police took into custody 83-year-old Devika Antharjanam, wife of Kandararu Maheshwararu, the chief priest of Thazhamon tanthri family. Her daughter, Mallika Nambudiri (57), was also forcefully removed by police from the protest venue.
Owing to the tense law-and-order situation en route to Sabarimala, Pathanamthitta district collector P B Nooh has imposed Section 144 at Nilackal, Pamba, Elavunkal and Sannidhanam. Police have also deployed a commando team at Sabarimala and another team of 300 police officials, including 11 circle inspectors, 33 sub-inspectors and women personnel, to contain the situation.
Industries minister E P Jayarajan, the de facto in charge of the government in the absence of chief minister Pinarayi Vijayan, who is in UAE to mobilise funds for post-flood reconstruction, said the state was duty-bound to implement the SC order. “The government will be blessed by Lord Ayyappa for facilitating the implementation of the SC order,” he added.
Travancore Devaswom Board president A Padmakumar said no special facilities had been created for women devotees but any woman who came to the shrine would be allowed inside. On Tuesday, talks between board officials and major stakeholders of Sabarimala, including members of the thantri family, those from the erstwhile Pandalam royal family and devotees’ associations, failed to yield results. Both sides now await the Supreme Court’s decision on the review petitions which it is expected to take up shortly.

NY Times Journalists On Sabarimala Trek Return As Protesters Throw Stones
Two journalists of the New York Times, who managed to climb up the pathway to reach the famed Sabarimala temple in Kerala on the morning of October 18, were forced to abort their trek and turn back following a massive protest by those who are trying to enforce the centuries-old ban on the entry of women of reproductive age in the temple, which was scrapped by the Supreme Court last month.
Delhi-based Suhasini Raj, along with her colleague, a foreign national, managed to go past the Pamba gateway, just before the climb to the hilltop shrine, but was stopped midway by angry protesters who formed a human wall before her.
According to eyewitnesses, the protesters forced the two journalists to return.
As she was climbing up, she kept saying that she did not come to pray but to do her work. Police had to throw a security ring around Ms Raj and her colleague as they made their way back.
“It was a massive protest by the devotees. The protesters were sitting on the pathway shouting slogans against her. She had no other way but to return and she did that,” said an eyewitness.
On Wednesday, the protesters, who opposed the entry of women in the 10-50 age group to the Sabarimala temple, clashed with the police and heckled women journalists as the pilgrimage season opened. Protesters combed buses, stopped women from going near the temple, attacked journalists, vandalised media vehicles and threw stones at the police.
The Sabarimala temple opened for the first time on Wednesday evening, October 17, 2018, after the Supreme Court ruling last month allowing entry of women aged between 10 and 50. Women were banned from the Sabarimala shrine for hundreds of years as devotees believe menstruating women are “impure” and the temple’s presiding deity, Ayyappa, is considered to be a celibate. Many take a vow of celibacy for 41 days before beginning a trek through the mountains to the temple.
The district authorities have clamped prohibitory orders banning large gatherings for 24 hours in a 30 square km radius of the temple town and the state is observed a statewide shutdown on the 18th called by a Hindu organisation backed by the BJP-led NDA.