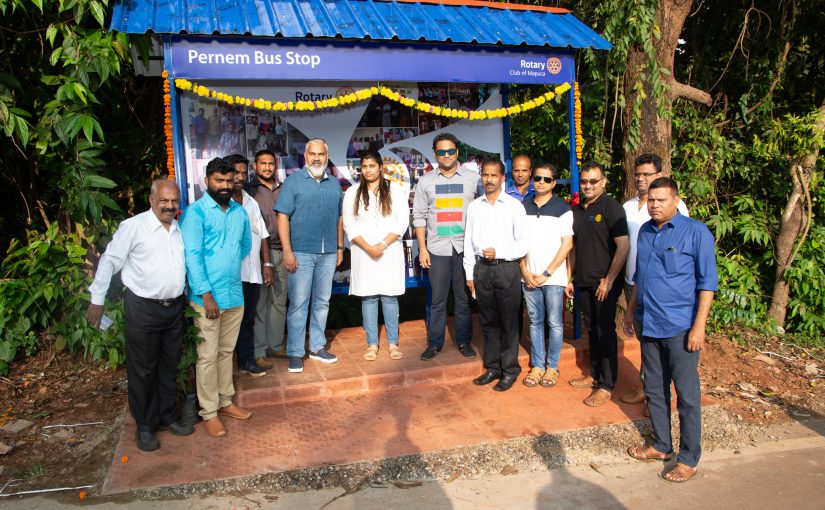 SMILES FOR BUS TRAVELLERS: Bus travellers in Pernem have reason to smile. The Rotary Club of Mapusa has erected a fabricated bus stop shelter opposite the civil court, Pernem, fulfilling a long pending demand of children and women, who had to brave both summer heat and monsoon deluge without any protection. The bus stop was inaugurated on Thursday, Oct 18, by chairperson Shradha Mashelkar in the presence of president Ajay Menon, secretary Ashley Delaney, social worker Sachin Parab and others

WE must commend former Chief Minister Laxmikant Parsekar for having displayed some spunk in very candidly exposing and castigating the very shoddy “politriks” of Chief Minister Manohar Parrikar and BJP’s Vinay Tendulkar. It is no secret that in the Goa Assembly elections in February last year, Manohar Parrikar to ensure that he remains undisputed leader, deviously connived to ensure the defeat of his own party men Laxmikant Parsekar, Rejendra Arlekar, Dayanand Mandrekar, Damu Naik and Dilip Parulekar.
Manohar Parrikar is so infatuated with the chief minister’s chair that even as defense minister he desperately forced himself as weekend chief minister of Goa, bypassing Chief Minister Laxmikant Parsekar. Last year, instead of choosing a knowledgeable, competent and versatile person who could, through his eloquent debates, raise and highlight Goa-related issues in the Rajya Sabha, the BJP in an act of sheer political bankruptcy, opted for a 12th Std Pass ITI motor mechanic — Vinay Tendulkar — for the very coveted post.
Goa must now witness a social uprising against the recent political turncoats Dayananad Sopte and Subhash Shirodkar, for having in their act of gross political chicanery taken Goa and Goans for a ride. In fact, if Vishwajit Rane was politically castrated when he similarly defected in March 2017, some much needed sanity would have been ushered into Goa’s political spectrum.
— Aires Rodrigues, Ribandar

PROTECT ENVIRONMENT
THE Ministry of Environment, Forests & Climate Change and the National Green Tribunal are the custodians of environment-related issues that affect the country in a big way and should in all cases oppose the Industries Ministry as far as protecting the environment strictly in letter and spirit while respecting environment laws while granting industrial clearances.
In the case of Mopa Airport, the NGT has given a vague reason that the airport is necessary for use of the people and in fact like the third Mandovi bridge, which is costing a whopping Rs 800 crore, the Mopa airport is not required at the moment as Dabolim Airport can handle flights for the next ten years without problems.
In fact, the reverse is true — the loss of 54,676 trees which are facing the axe for construction of Mopa Airport, is going to affect the environmental balance of Mopa and surrounding areas overwhelmingly.
This is reason enough for NGT as custodians of nature not to permit wanton cutting of so many trees. An extremely bad decision should be reversed otherwise the affected people may sue NGT for thousands of crores of rupees in damages due to dereliction of duty.
Mopa residents are opposing the setting up of the airport overwhelmingly in order to maintain their environment as also conduct agricultural activities which sustain the environment.
— Elvidio Miranda, Goa

DRINKING TRENDING UP!
On Oct 14, a local daily brought out the impending drinking problems in adolescents in India. The article reports alcohol use in the age group 13 to 21 ranges from 6% to 53%!
A GMC Doctor this year was awarded for his contribution in the field of prevention of alcohol and substance abuse. He said 20-year-olds were developing cirrhosis of the liver suggesting they start drinking daily at age 13! This is cause for grave concern.
The article gave many reasons for this but the most important one: surrogate advertising. Here, liquor companies advertise their products in the name of glasses or soda. Google why they do this and you will find replies from employees of liquor companies. One employee from Carlberg says they use surrogate advertising and everyone knows they are relating to liquor! They speak of surrogate advertising like this is totally legal! The law says that liquor cannot be advertised so, they are subverting the law. Totally unscrupulous!
We saw some grandiose ads from liquor companies to not drink and drive?? But they have no qualms in inducing minors to drink?
Goans used to not abuse drinking, but tourism stakeholder Goan employees, conned by such unscrupulous liquor marketing heads, ensured that drinking competitions and surrogate advertising spoil the lives of youth by taking drinking to the next level.
Goans need to re-look at the scenario and boycott brands that use surrogate advertising. We need to keep up with our tradition of being different.
Football is another avenue for unscrupulous liquor promotion. No live ISL match goes without the cameras focusing on a group of people dancing in Tshirts advertising a particular brand. FC Goa now has tied up with the same brand as well as a beer brand. FC Goa players visit youth in different parts of Goa always posing in front of the beer banner! What message does this send?
I for one have long since boycotted FC Goa, which is politically steered by coastal Ministers having tourism business who even control the players bought, and the selection of the captain.
It takes courage to not be led by the nose ring. Can Goans boycott these brands? Are you not capable of teaching the marketing heads how to drink? Are you only a yes man? Can you stop advertising liquor on your T shirts? Do you have any self-respect? Are you different?
Be a leader not a follower.
— R Fernandes, Margao

FIGHTING THE FUTURE
I was horrified to read about the apparant murder of Jamal Khashoggi, Saudi dissident and Washington Post journalist.
On Oct 2, Khashoggi entered his home country’s consulate in Istanbul, Turkey, seeking routine paperwork he needed to marry his fiancee. His fiancee waited outside as he entered the Consulate under full view of a Turkish street camera. He has not been seen since.
Turkish officials say he was killed inside the Saudi consulate by a special Saudi hit squad – an assertion the Saudi government strenuously denies. However apparently the Turkish government has recovered a seven minute audio clip of Khashoggi as he was dragged into a conference room and butchered while still alive.
As the spine-chilling facts emerge, let us pray for justice for Mr Khashoggi and the people he left behind. And let us pray that we get together and fight all attempts to make India a one-religion country where dissent is not tolerated. We may disapprove of what someone says, but must defend to the death their right to say it.
— Blaise Dias, Goa