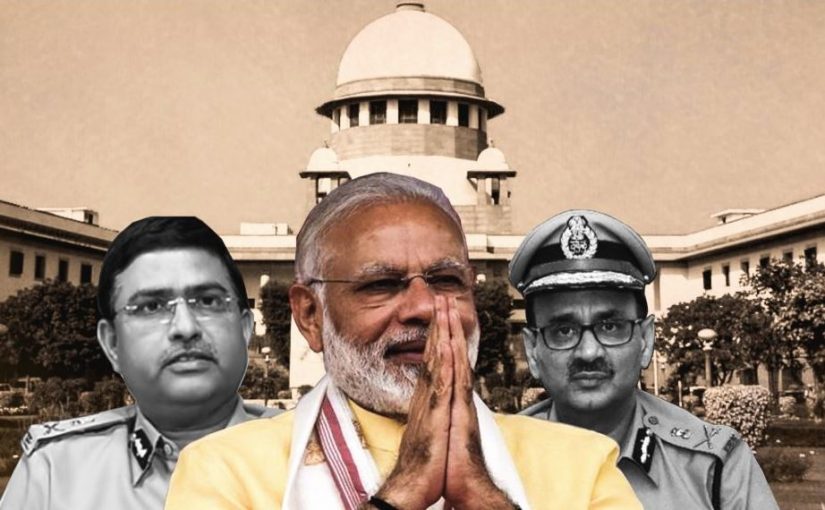 ILLEGAL: Verma, in a plea filed before the Supreme Court, said the Central Vigilance Commission (CVC) and Department of Personnel and Training (DoPT) took an ‘overnight’ decision to divest him of his powers because he was investigating cases inconvenient to the government. He added the decision was in violation of the principles of natural justice as well as clear provisions of the Delhi Special Police Establishment (DSPE) Act

For the first time in the history of the country a public war has been broken out within India’s top intelligence agency — the Central Bureau of Investigation. The Congress is terming the midnight coup against CBI director Alok Verma “illegal” and a “panic reaction” by Prime Minister Narendra Modi to stall investigation on “corruption” in the Rafale fighter jet deal

The Centre’s decision to send the Central Bureau of Investigation (CBI) director Alok Kumar Verma on compulsory leave has taken the clock back over 20 years, as it runs contrary to a Supreme Court directive in the famous Vineet Narain vs Union of India case in which the court, in order to curb political influence in the functioning of the CBI, fixed the tenure of its director at two years.
Though the Narendra Modi government has not removed Verma from the post, in forcibly sending him on leave and appointing joint director M. Nageswara Rao as interim director, it has effectively done the same.
SC sets term
While before 1997 it was the Centre which decided the tenure of the CBI director, in their order in the Vineet Narain case which primarily dealt with the probe into the hawala transactions as revealed by the ‘Jain diaries’, Justices S.P. Bharucha and S.C. Sen had issued a number of guidelines to ensure efficient functioning of the CBI. “The Central government shall take all measures necessary to ensure that the CBI functions effectively and efficiently and is viewed as a non-partisan agency,” they had held.
The Supreme Court had in its order also clearly spelt out the process for appointment of the CBI director, stating that “recommendations for appointment of the director, CBI shall be made by a committee headed by the central vigilance commissioner with the home secretary and secretary (personnel) as members. The views of the incumbent director shall be considered by the committee for making the best choice.”
It had added that “the Committee shall draw up a panel of IPS officers on the basis of their seniority, integrity, experience in investigation and anti-corruption work. The final selection shall be made by Appointments Committee of the Cabinet (ACC) from the panel recommended by the Selection Committee. If none among the panel is found suitable, the reasons thereof shall be recorded and the Committee asked to draw up a fresh panel.”
The Bench had also specified the tenure for the CBI chief noting that “the Director, CBI shall have a minimum tenure of two years, regardless of the date of his superannuation. This would ensure that an officer suitable in all respects is not ignored merely because he has less than two years to superannuate from the date of his appointment.”
It had also laid down that “the transfer of an incumbent Director, CBI in an extraordinary situation, including the need for him to take up a more important assignment, should have the approval of the Selection Committee”.
As for the role and responsibilities, it had stated that the director of CBI “shall have full freedom for allocation of work within the agency as also for constituting teams for investigations.”
The apex court had also held that CBI’s director shall be responsible for ensuring the filing of chargesheets in courts within the stipulated time limits, and the matter should be kept under their constant review.
Transfer of Asthana on different footing
As such, the Centre’s decision to send Verma on leave stands on a completely different footing as its decision to send special director Rakesh Asthana on such forced leave.
The decision has been challenged by Verma in the Supreme Court and the matter was placed before Chief Justice Ranjan Gogoi, who agreed to list the case on Friday.
What is pertinent to note here is that the Supreme Court judgment in the Vineet Narain case had also laid down the power and tenures of officers in the CBI, CVC as also the Enforcement Directorate had done so while dealing with a case which had shown the kind of political interference in such agencies as is being witnessed now.
While at the moment the Centre is being accused of taking sides with Asthana and not letting CBI arrest the Gujarat-cadre IPS officer, who has been accused of corruption in an FIR filed by the CBI on October 15 and who was described by Congress president Rahul Gandhi a few days ago in his tweet as a blue-eyed boy of {rime Minister Narendra Modi, the Jain hawala case too had exposed what the Supreme Court had described as “inertia of CBI”.
The apex court had then stated: “Even after this matter was brought to the court complaining of the inertia of CBI and the other agencies to investigate into the offices because of the alleged involvement of several persons holding high offices in the executive, for quite some time the disinclination of the agencies to precede with the investigation was apparent.”
Incidentally, during the Coalgate scam under the Manmohan Singh government, an affidavit had been submitted by the Centre before the Supreme Court after the latter had demanded that the CBI be allowed to function without any external pressure.
The Centre had then submitted that the CBI director would not be appointed or removed without the consent of a collegium comprising the prime minister, the chief justice of India and leader of the opposition. But in case of Verma, the matter has not been referred to the Selection Committee and the government has itself stated that Rao was appointed interim CBI director by the Appointments Committee of the Cabinet.
The Centre had also reiterated before the apex court that the CBI director could only be removed on the ground of misbehaviour before the expiry of fixed tenure of minimum of two years but for that too the order could be issued by the president only after the institution of an inquiry. However, in the case of Verma, there was no such inquiry.
The Centre had also submitted that an accountability commission comprising three retired Supreme Court or high court judges would be constituted to look into cases of grievances against the CBI director.

A journey of the two officers — one who climbed the ranks unnoticed, the other flamboyant and high-profile — until their paths crossed at the CBI
Nov 30, 2016: Then Special Director of CBI, R K Dutta, is transferred to Home Ministry 2 days before agency chief Anil Sinha was to retire
Dec 2: Then Additional Director Rakesh Asthana (Gujarat cadre) is appointed interim director
Dec 5: Senior lawyer Prashant Bhushan files a petition in SC challenging Asthana’s appointment
Dec 17: SC tells government to follow its directions on the criteria for selection of CBI director
Feb 1, 2017: Government appoints then Delhi CP Alok Verma as director
Oct 21: Verma hands over a confidential note to CVC during its panel meeting over promotion of Asthana to the post of special director. The note said that Asthana was paid `3.88 crore by Sterling Biotech
Oct 22: CVC panel unanimously clears Asthana’s promotion
July 12, 2018: CBI Director Alok Verma writes to CVC through A K Sharma, additional director (policy), that Asthana does not have the mandate to represent the Director in a meeting over induction of certain officers into the CBI and extension of tenure of some officers. The letter also says Asthana is himself “under (the) scanner” in several cases.
Aug 24: Asthana lodges a complaint with Cabinet Secretary that Verma was interfering in cases which he was investigating, and that he had tried to stop a raid on Lalu Prasad Yadav in the IRCTC case. The complaint is forwarded to CVC, which starts a probe.
Oct 15: CBI registers an FIR against Asthana alleging that he received a bribe of `2 crore to settle a case against Hyderabad businessman Satish Sana. Arrests middleman Manoj Prasad.
Oct 23: Order issued divesting Verma of all duties.
Oct 24: Verma challenges CVC order in SC.
Oct 26: SC gives two weeks to CVC to complete its probe against Verma.