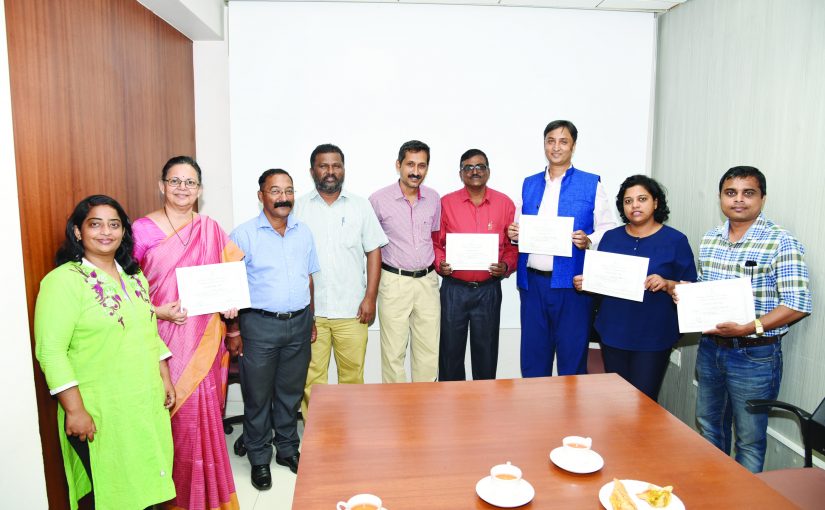 ESSAYS FOR CHANGE: The winners of the All Goa Essay Competition organised jointly by the Directorate of Industries,Trade and Commerce and the Department of Information and Publicity were felicitated at a function in Panaji. The topics for the essay competition were ‘My United India’ and ‘Role of Industries in Nation building’. Members from the media fraternity and persons working in Industries participated in the contest. Sheela Jaywant, Shashwat Gupta Ray, and Amaralda Barreto bagged the first, second and third prize (English category), respectively, while in the Konkani/Marathi category, Sachin Khutwalkar and Kishor Shet Mandrekar were adjudged the first and second prize winners, respectively. The consolation prize was awarded to Suresh Raikar. Director of Directorate of Trade, Industries and Commerce VP Dangui was the chief guest

HOW can Panaji ever be a smart city if the Corporation of City of Panaji (CCP) has so miserably failed to even deal with all those potholes at its very entrance? Less said the better on the scam embroiled CCP. The awfully filthy state of affairs at the Panaji market is a horrifying eyesore. Garbage dumped all over and even at the very entrance of the city…the odour emanating from the Rua de Ourem and St Inez creeks is horrifying.
— Aires Rodrigues, Ribandar

GOANS YET TO LEARN!
WE are yet to comprehend the way India functions — to our detriment. Indian politicians get elected not to govern or do good for the country but to make money and/or promote hidden agendas. Just retrospect on the present BJP government.
The Central government executes projects worth many crore of rupees in government departments like PHEDs/Railways/Bridges, etc. The equipment supplied either never functions properly or is never even installed. The officials work through middlemen who take the required bribes to be paid from top to bottom. During election you need to see the expectancy of all contractors and government officials. They already know the trend and are quite accurate on which government will come to power. They being sounding out suppliers that they will be getting so many orders including, if there is change in government, orders already given to other contractors!
How do they function? The politicians look out for new projects/augmentation of existing ones, etc. They are not intelligent enough to think out avenues. They are approached by their crony businessmen “friends” who show them how much they can get “under the table.” Each political party has its middlemen to collect under the table money and distribute it.
So, we have seen: After the present government said no more casinos would come into the Mandovi river, a new one belonging to a BJP leader joined casinos already on the river. They said the casinos would be shifted out to the high seas: Nothing happened. The constructions within HTL are sought to be reduced to 50 mts. On land casinos are planned anywhere in Goa for the benefit of a Central minister! The master tourism plan for Goa ensures crooked businessmen can exploit land in Goa for their personal use. Coal hubs with massive infrastructure to handle coal transportation and the hijacking of rivers is under way to facilitate crooked and near bankrupt businessmen.
How do you counter all this? Keep counting on Goa Foundation to fight legally? Even this is not possible now because the laws can be changed. We see this happening in the mining sector. Illegal mining is sought to condoned and promoted by law. Have you elected representatives protected Goan interests? If you see what is happening in Goa today it is the local BJP leaders from the CM to the coalition partners who are selling Goa to the Adanis and Vedantas!
A way out? Be actively and politically active in educating your neighbours, Get them to reject this money for votes business or the constant hope in the 40 existing MLA’s: these 40 are all responsible for the present situation and the ultimate demise of Goa and Goans.…special status is our need and no Swamy can tell you otherwise. Demand, don’t plead. The 40 are on the fast track to grab everything now as they realize Goans may demand their rights. They have counter: Promote vote banks. Monte Hill in Margao is seeing new constructions coming up illegally courtesy a new coalition member…Goans cannot afford to sit relaxed for there is a fire under their seat. Confront the crooked MLA, question him, don’t be too gentle, don’t vote for him or her. Let us get 40 new faces and preferable new parties.
— R Fernandes, Margao
VIT A FOR EYES
I AM so glad you have started inserting your Mind & Body, Heart & Soul section in the Goan Observer weekly (issue dated Nov 3, 2018). With reference to your feature on eyes and cataract surgery I would like to contribute this bit of information I garnered from the book `Eye Strain: Helping your Eyes Last a Lifetime’ by Emily Kane (ND). She confirms that vitamin A is good eye food! Vitamin A allows the rods and cones in the retina to adjust to light changes, produce visual excitation and send images to the visual centres of the brain. This mechanism was detailed in 1950 and the research won a Nobel Prize. An early sign of vitamin A deficiency is night blindness.
Carrots are an excellent source of vitamin A via the beta-carotene precursors, but so are all darkly coloured vegetables. Dark green vegetables have lots of beta-carotene, but the green of the chlorophyll overwhelms the yellow and orange tones.
The highest food sources of vitamin A in descending order are liver, carrots, sweet potato, spinach, apricots, winter squash, cantaloupe, broccoli, crab and peaches. The RDAs for retinol equivalents are about 5000 IUs (international units.)
However, consider a therapeutic dose, for those with compromised vision, closer to 50,000 IUs. Women who get pregnant however should not take higher than 150,000 IUs and if in doubt, use water-soluble carotene rather than fat-soluble vitamin A which stays in the tissues longer.
Extremely high doses of vitamin A are known to cause fetal damage. This was discovered through use of a popular acne drug Retin-A, which is a synthetic version of vitamin A delivered in very high doses. Do consult your ophthalmologist though on this subject before prescribing for yourself! Although in India I must note that mainstream medical professionals are quite ignorant of any kind of nutraceutical prescriptions by way of preventive healthcare. No harm in adding the vitamin A-rich veggies to your salads, raita and drinks though on a daily basis.
— Pricilla D’Souza, Porvorim

SANE OLD LIARS
It’s shocking that the Goan public keeps electing the same old rogues into power. Corruption flows top-down perhaps, but it also flows from the bottom to the top in a democratic environment.
With the government at risk of imploding keep this in mind — If you vote for someone corrupt because he can give your son/daughter a job you are equally corrupt. And if you do it because a minister will give you a few thousand rupees, you are a fool! Every minister has shown he will switch loyalties at the drop of a hat for his own benefit — Goans and their interests can go to hell.
Instead, vote for someone who will protect Goa, encourage proper education and create jobs so that future generations, perhaps your grandchildren, have fresh air to breathe, decent roads to drive on, good schools, accessible medical facilities and can get jobs right here.
Vote out all the familiar faces and give new faces a chance. Otherwise Goa has no chance at all.
— Blaise Dias, Panaji