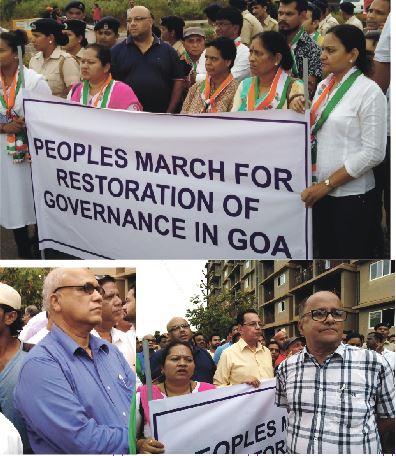 PEOPLE POWER? (clockwise from left) The protest march for restoration of governance brought together politicians, activists and ordinary people too; Activists Aires Rodrigues and Dr Fransisco Colaço both spoke of the urgent need for Parrikar to hand over the reins; Former chief minister Digambar Kamat added his silent support to the protest

Opposition politicians, activists, and aam junta gathered together to march towards Parrikar residence in an attempt to force the government to end the limbo that is stifling life and business in Goa

IT was meant to be a peaceful march but there were surely as many policemen and policewomen around as protestors! It was to such cries as “Ek do, ek do..Goa sarkar fek do” and “Goyancho sarkar…hai hai” that over a hundred protestors marched in the late afternoon from the International Center of Goa to the private residence of Chief Minister Manohar Parrikar’s at Dona Paula on November 20, 2018.
The protestors were accompanied by police and virtually cordoned as they walked towards the chief minister’s residence but even before they get anywhere close enough the police stopped them. Unable to meet the chief minister the angry protestors shouted slogans about the failure of the government to take cognizance of how the wheels of administration were grinding to a slow stop over the last nine months with the chief minister away for treatment in New York, New Delhi and back in Goa to recuperate in isolation with only a few able to see him.
Given the condition of the Goa chief minister’s continuing ill-health most of the protesters wanted to say hello to him and urge him to hand over the reins of power to his colleagues until he recovers completely. Amongst the protestors who marched were Congress, NCP and Shiv Sena politicians, including familiar faces like advocate Aires Rodrigues, advocate Yatish Naik, former chief minister of Goa Digambar Kamat, Congress leaders Girish Chodankar, Chandrakant Kavlekar, Avinash Bhonsale, Jose Philip D’Souza, Rui da Gama, Anusaya Tambli and more.
In the forefront of the march was eminent cardiologist from Margao, Dr Francisco Colaço, who to a query wryly replied that this is the story all over again being repeated of a man who believes in “apres moi, le deluge!” Translating more or less: To hell with what happens after I am no more! (It’s a famous expression credited to Madame de Pompadour, mistress of King Louis XV of France, after the Battle of Rossbach in 1757.)
The protestors carried a banner of People’s March for Restoration of Governance but nearing the building where the chief minister is residing all the protestors were told to stop and move no further. There was nothing to do but shout some more slogans. The marchers were led by advocate Aires Rodrigues who asked if a small group could go meet the chief minister but they were in the end forced to pay heed to deputy Collector Shashank Tripathy who conveyed the message that the chief minister did not want to meet the protestors because he was not feeling up to it. Expressing dismay at this turn of events, advocate and social activist Aires Rodrigues delivered an ultimatum of 48 hours to Mr Parrikar to step down as chief minister, saying “We need a full-time chief minister because the state administration has collapsed and the chief minister is not even meeting his own ministers and MLAs…” If Manohar Parrikar insisted on not handing over his powers, Aires said the people of Goa were going to launch a state-wide agitation and the entire Opposition was with them.
Part of their concern was that RTI crusader Rajan Savllo Ghate was on a fast at Azad Maidan in Panaji from November 16 and adamant that in no democracy could a state administration be kept on hold indefinitely. It is no secret now that Mr Parrikar has been diagnosed as suffering from terminal pancreatic cancer and since Oct 14, and after being discharged from All India Institute of Medical Sciences (New Delhi) he is being treated under strict supervision at his “borrowed residence” at Dona Paula.
Very few are permitted to meet him, fuelling the mystery of the chief minister’s health status further, with the question arising: Is he being kept alive on artificial life-supporting system until the BJP bosses in Delhi take a decision about what to do to solve the looming crisis in the Goa government?