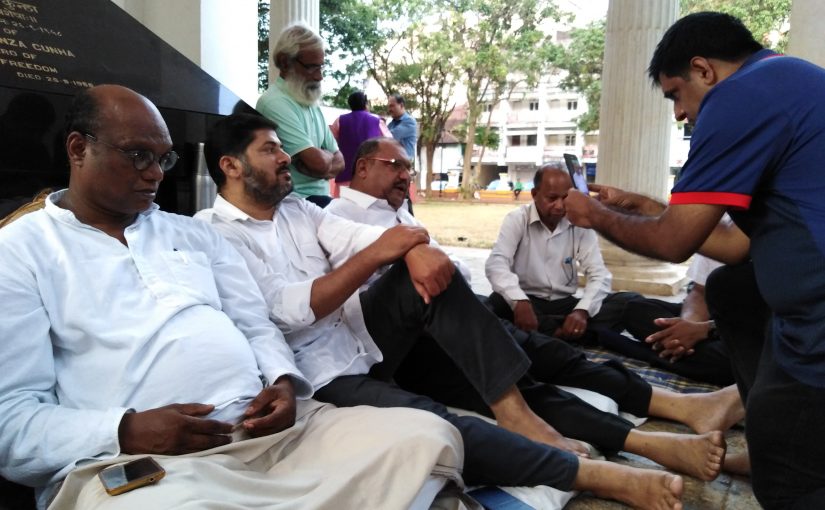 Is Gandhigiri a much abused idea and do we respect it anymore, asks Tara Narayan, after visiting veteran crusader for democratic rights Rajan Savllo Ghate who is fasting anew unto death at Azad Maidan in Panaji…his fast commenced at 11 am on a hotter than usual November day, that is November 16, 2018. To everyone who turns up to support him or express concern he simply says, “I am fasting for my democracy!”

WHO Is RAJAN SAVLLO GHATE?
Ask his friends! He has many friends judging by the group always around him where he is currently on an indefinite fast at Azad Maidan for the resignation of Chief Minister Manohar Parrikar. His friends generally agree that Rajan Ghate is a one-man army! The general perception is that he has been and continues to be a social activist of the very best kind, his father was a freedom fighter.
He has helped many people in Morjim and Siolim from where he hails. He is married and has one son, moved residence to Assagao recently. Even earlier on Rajan bab’s name is associated with preventing the illegal purchase of land by foreigners in Morjim. He has always been a strong advocate and defender of the Right to Information (RTI Act 2005) and co-founded the Goa RTI Forum which now has over 200 members.
According to the forum’s Sandeep Heble their members may be described as RTI activists, they offer help to anyone wanting to file an RTI application for accessing information from a government department. The Goa RTI Forum offers one platform to anyone seeking information and meets informally every three months or so. Rajan Ghate continues to be one of its co-ordinators and committee members, he is only one of five Indians to be awarded the national RTI award in 2010.
Rajan Ghate is a member of the Panaji Block Congress since September 23, 2017. He went to Tope Society’s High School in Siolim, studied at Goa University. He went on an indefinite hunger strike at Azad Maidan on April 21, 2013, demanding for the appointment of chief information commissioner and state information officer at the earliest. Chief Minister Manohar Parrikar had visited him then and offered him tender coconut water to break his fast, with assurances that SIC and CIC would be appointed by July 29, 2013.
Rajan Savllo Ghate is one of Goa’s evergreen heroes for a common cause — for the larger good of Goa and Goans! Definitely a good man to have on one’s side in good times and bad times.

Rajan Ghate’s wife, Deepika Rajan Ghate, shared an eloquent open letter from the Goan RTI Forum to the government…
Goa RTI Forum expresses disappointment over the official stand taken by the ruling party during the press conference addressed by its President Vinay Tendulkar on November 21, as regards the hunger strike being observed by RTI Activist Rajan Ghate at Azad Maidan. The Forum passionately appeals to the government to reconsider its stand.
In a democracy, government must be for, of and by the people and it must be warm, embracing and sympathetic towards its citizens at all times. Government may or may not agree with views or some of the actions of its citizens but it should respect constitutional rights and must take positive suggestions as well as criticism in its stride.
Citizens in general may be aligned to some political party or the other but they do not cease to be citizens merely by entering into political parties. So too is the case with RTI activists. There are many RTI activists who are in the Congress, many in AAP and there will be many in the ruling party as well. But they are all citizens of this Country and need to be respected. Arvind Kejriwal, a prominent activist in now in Aam Aadmi Party. Our own Chief Minister Mr. Manohar Parrikar has himself been a very prominent exponent of the RTI Act and has utilised it to good effect in the past. Another significant BJP leader Subramaniun Swamy has exposed so many corrupt practises through the RTI Act. It is pertinent to note that BJP has been one of the first political parties to have a special RTI Cell through which it has filed several applications on various issues during

the previous regime, to expose wrongdoings of the previous Government. Will all these people cease to be activists simply because they are part of political parties?
Hunger strike is a non-violent form of protest and government must not look at it negatively. The issues raised by Mr. Ghate need to be addressed. Labelling someone as activist belonging to “X” political party or “Y” political party and putting that person down is not the right way for a progressive thinking state like Goa. Government’s own partners have also made similar suggestions which it may or may not consider, but some liberal discussion on this can be a good way forward.
Goa RTI Forum recalls that when Rajan Ghate had observed a hunger strike last time to appoint RTI Commissioners in Goa, it was Mr. Manohar Parrikar himself who met Rajan and assured him to take necessary action in the matter. Mr. Parrikar, at that time, we must recall, called himself the “biggest supporter of RTI”.
Mr. Ghate has been a prominent figure in the state who has fought for preservation of Goa’s land. In the past, he has exposed the violation of Foreign Exchange Management Act (FEMA) by foreigners in buying lands and following his agitation, the Centre had issued notices to 400 properties in Goa purchased by foreigners.
Human values need to be preserved over and above all political considerations. Mr. Ghate’s only contentions are that the CM who is presently ailing must distribute his portfolios to bring about better governance and efficient administration. While the Government has a right to agree or disagree with him, it should not discard him or leave him in the lurch simply because he might be a member of some political party or the other.
We must not forget that even the British engaged in talks with Mahatma Gandhi when he went on hunger strikes whereas Mr Ghate is our own citizen. In view of this, Goa RTI Forum passionately appeals to the Government and the ruling party to reconsider its present stand vis-à-vis Ghate whose hunger strike enters its 7th day today (Nov 22). It must take a sympathetic view towards the activist and National Award RTI winner. As his health keeps deteriorating day by day, some engagements and talks with the activist to get him to end his strike and get back to good health will be the right way ahead.
— Goa RTI Forum