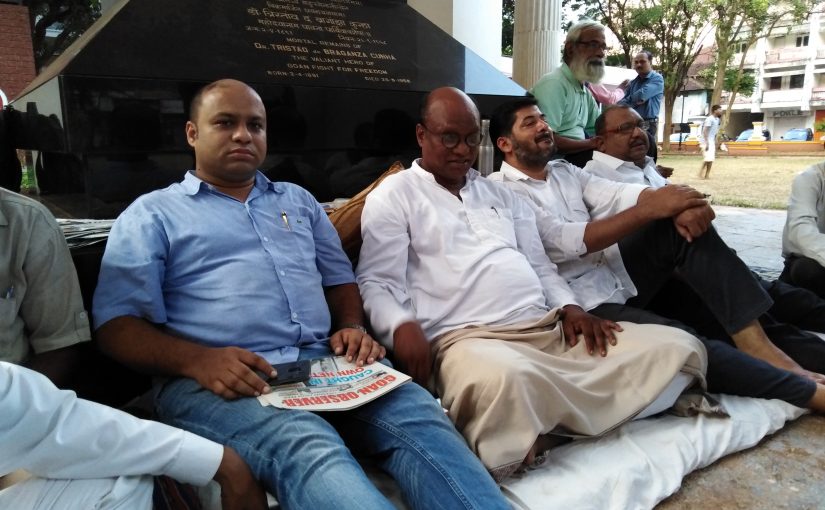 ULTIMATUM: NGOs and political parties led by RTI Activist Rajan Ghate who has been fasting for the return of governance to Goa marched to the Chief Minister Manohar Parrikar’s house in Dona Paula. They demanded that the ailing Parrikar should either resign or handover charge to some other minister

Contrary to the vehement insistence by Bharatiya Janata Party (BJP) President Vinay Tendulkar and IT Minister Rohan Khaunte, officials do a better job of governing than mantris. Provided the ministers in-charge of the departments allow them to perform their duties honestly and go by the rule book.
Not just Rohan Khaunte, who made the frustrated comment that bureaucrats of departments under Chief Minister Manohar Parrikar were “misusing” the absence of the ailing leader and stalling government schemes, but all the mantris in Manohar Parrikar’s cabinet are extremely unhappy over the delay in movement of files. They are unhappy because the babus will not dance to their tunes. The babus will not permit them to do anything illegal.
For ministers the whole point of becoming a member of the Cabinet is to bend and break the rules for the benefit of the people of their own constituency and more importantly for themselves. For instance when tenders are issued ministers often will not allow them to be cleared even if they are the lowest and the best if they do not get their cut. How else can we explain monstrosities like the so-called concretised Dona Paula road which took almost a decade to complete?
All you need to do is to take a passing glance at the report of the Comptroller and Auditor General of India (CAG) to see how ministers, often in collusion with officials, bend and break the laws to make money for themselves and sabotage projects in the public interest.
As we pointed out earlier, Cabinet ministers have no real power. They derive their power from the chief minister. They hold office at the pleasure of the chief minister and are accountable to him. The situation of course is much worse in the case of the present BJP alliance government in Goa headed by Manohar Parrikar.
Manohar Parrikar clearly is too sick to carry out his duties as chief minister. Unfortunately for Goa and his Cabinet colleagues, Parrikar holds all the key portfolios like Finance, Home and Administration. This means that unless he endorses or initials the file or proposal made by the Cabinet minister, money will not be released. The ministers do not have access to Parrikar. The MLAs do not have access to him either. Parrikar claims to be running the government through two key bureaucrats — Krishnamurthi who is Principle Secretary to the Chief Minister and Chief Secretary Dharmendra. Of the two, Krishnamurthi, who was with him for a long time, including during Parrikar’s stint in the Defence Ministry, appears to enjoy the total confidence of the chief minister.
The only other official who seems to have access to the chief minister is Rupesh Kamat, his personal assistant. Whether they are faithfully conveying the directions of the chief minister or twisting them to suit their purposes no one knows. The doubts arise from the fact that even non-controversial projects are held up. We cannot imagine why the tender for the cleaning of the beaches was delayed and the beautiful beaches of Goa are covered in garbage rather than sand at the beginning of the season!
The big mystery is the health and fitness of Chief Minister Parrikar who holds 30 portfolios. Can he think, can he read, can he walk, and can he sign? Nobody knows because there is no medical bulletin. Even when he was taken from his ICU residence to the GMC for an MRI he was carried on a stretcher indicating that he certainly can’t walk. The pictures released some time ago only confirmed that Parrikar is not fit to govern.
Bureaucrats, particularly those belonging to the Indian administrative service, are generally very honest and hardworking. We must make a distinction between the promoted and the direct recruits. The former are State Civil Service Officers who are promoted to the IAS and may tend to be corrupt because they have been very close to people in power and politicians from all parties. The direct recruits who are from the Union Territory cadre have produced some of the best officials in the country, many of whom have been posted in Goa at some time or the other.

pay commissions and people were not paid huge amounts like they are now.
With his obsession with honesty Almeida lived a very unpretentious life. Fortunately for him all his five children managed to find jobs abroad. J C Almeida stayed alone with his wife in the house he built in the La Campala colony. Even in his ‘80s he used to drive about in his Vintage Premium Padmini. I recall spending some time with him when it was clear that the end was near. Even then J C Almeida, as always, was the perfect host. He was part of the old Portuguese generation who consider it very important to be gracious to guests. Despite his illness he would get up and pour me a drink and even insisted on walking me to the door. Goa would be much better of under a chief secretary like the late J C Almeida than a sick chief minister like Manohar Parrikar and all the wolves who are waiting for him to step down so that they can grab the kodel.
The only other time Goa had excellent governance was when there was spell of President’s rule, when a senior BJP leader Lt Gen Jacob, ironically a Jew, was the boss. General Jacob was the hero of the Bangladesh war when India inflicted a humiliating defeat in Pakistan with General Niyazi and more than one lakh soldiers, surrendering to Gen Jacob. If Netravali and Mhadei are wild life sanctuaries today it is because of the joint efforts of Richard D’Souza, the Goan Indian Forest Service officer and Governor Jacob who was ruling Goa during the spell of President’s rule.