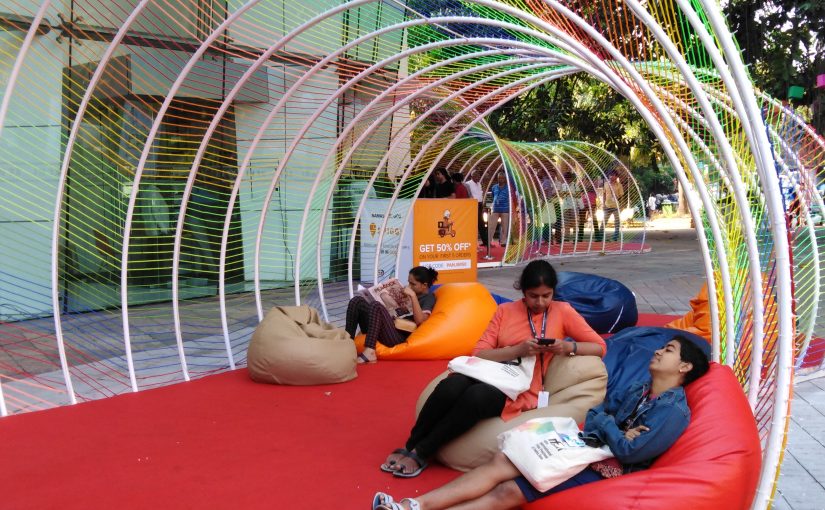 THE JOYS OF IFFI…

Taking a happy break at INOX courtyard currently in IFFI 2018 mode: At any film festival it’s delegates young and not-so-young who keep looking for a quiet place to take a break in between film viewing. Here someone’s laid out snug beanbags this year as part of IFFI courtyard décor and young delegates love them although it’s not such a quiet place! Take a bow whoever has come up with this comfy touch. (Pic by Tara Narayan)

THE cops who carried out a brutal attack against the teenaged FC Goa fan, Lester D’Souza from Anjuna and his mother soon after the FC Goa v/s Delhi Dynamos match at Fatorda recently for clicking photos should be immediately dismissed from service by the Goa government. The cops were behaving like uncivilized roadside goons or thugs against innocent, football-loving crazy Goan fans.
Most cops in Goa think that they can physically assault or bash up anyone just because they are wearing a police uniform. Wearing a police uniform means they can extort money from matka bookies, drug dealers, indulge in eve teasing against young females and even have lunch/dinner/pao-bhaji for free almost daily at their favorite outlets. The men in uniform think that only they are above the law in Goa!
Most are seen simply roaming around in police jeeps in name of patrolling on national highways and villages and doing nothing but playing childish games on their mobile sets and reading newspapers. They never have spine to go after real hardcore criminals or goonda but yes, these cowards in uniform always enthusiastically assault or bash up innocent aam aadmi Goans making flimsy, silly excuses.
The cops involved in the bashing up Lester D’Souza should be immediately arrested or suspended. Viva Goa, Viva Goenkar!
— Jerry Fernandes, Saligao

LET BUREAUCRATS DO THEIR JOBS
It is very despicable that some Goa Ministers are needlessly blaming the government bureaucrats for raising many queries on the files sent to them.
In this current political chaos, while Chief Minister Manohar Parrikar is physically incapacitated, some of the Ministers are deviously attempting to make the most of the current turmoil by attempting to hurriedly rush through their deceitful agenda and make merry while Manohar Parrikar is battling for his life.
It is the bounden duty of every government officer to strictly ensure that every proposal they are vetting and approving is absolutely in accordance with law and the constitutional framework.
If the bureaucrats deviate from this and succumb to the threats and tantrums of the Ministers, it is they who will land up at the Colvale Central Jail and be cooling their heels while the Ministers after their illegal diktats will go scot free.
In the Shiroda multi-crore land scam involving former Shiroda MLA Subhash Shirodkar, it is some officers who will bear the brunt for having acted in breach of law at the behest of Chief Minister Manohar Parrikar.
— Aires Rodrigues, Ribandar

MISUSE OF FIRE BRIGADE
Water shortage is a major problem for large parts of Goa. The laying of water pipelines under the Jawaharlal Nehru National Urban Renewal Mission (JNNURN) has been delayed and is still continuing in Panaji. Through this project, which is the only major utility project that received money under the JNNURM scheme floated by the UPA regime, Panaji is supposed to receive 24×7 potable water.
What is an irony is that Panaji is aiming for 24×7 water supply when major parts of Goa are facing huge water problems and don’t even have a few hours of supply. Although a new reservoir is being constructed at Opa, it seems that our so-called Smart city will deprive other areas in Goa from being able to share the water quota for a 24×7 supply meant for Panaji.
Today while I was in Manipal Hospital I saw a Fire Brigade going towards Bambolim with full of water and with siren. I’ve seen this happening regularly, that too twice a day. Since I was curious to know where fires happen along Dona Paula-Bambolim road twice a day, I followed it and was surprised to see it turn into the Shyama Prasad Mukherjee stadium. It looks like this Fire Brigade vehicle is being misused to transport water to the Stadium, that too twice a day, in lieu of water tankers. With IFFI this is only going to get worse. I’ve also been informed that the fire brigade was used to water the plants in the road divider at times. In case of emergency where will they suddenly find water?! I’ve heard that Mr Menon, the in-charge is due to retire soon. Perhaps he doesn’t want to rock the boat by refusing.
Will the goverment keep a check and find out from their log books where else such activities are going on? We aam aadmi have to pray that there is no fire emergency in any other place while the fire brigade is otherwise deployed.
— Stephen Dias, Dona Paula

BOYCOTT THE FAIR
This refers to a news report in a local daily on November 21. Two fairs at Navelim. One fair has come up in a private property. These fairs are normally set up by locals — clubs, associations etc — allowing local self-help groups to sell their wares. In this case a local elected panchayat member has given the entire contract to one contractor. He then determines who can set up stalls and the price. As per the report locals are unable to get stalls. Further, the fair has come up on a private property to which locals have objected to. No NOC seems to have been obtained.
This is the classic modus operandi for all money-making rackets coming up all over in Goa. Elected representatives hand over the total job to contractors, in this case, the fair. The same comes up on any land available with or without permissions.
The situation with the whole sale fish markets is similar and Goans not only are denied fresh locally sourced fish but are made to pay through the nose for any kind of stale/formalin laced fish.
We see many plant nurseries, cement grills, furniture, marble etc. outlets along the highways. Whose land is being used and who collects the rent? In the report, private land was used for the fair. When it is government or communidade land, these unscrupulous people collect free rent!
In the case of the fairs at Navelim, the locals objected to the set up. However, people from all other villages visit this fair. We need to keep ourselves informed and boycott such illegal activities, just as we did with the fish brought from outside Goa. We need to nip in the bud these kinds of money making rackets of these elected people.
— R Fernandes, Margao