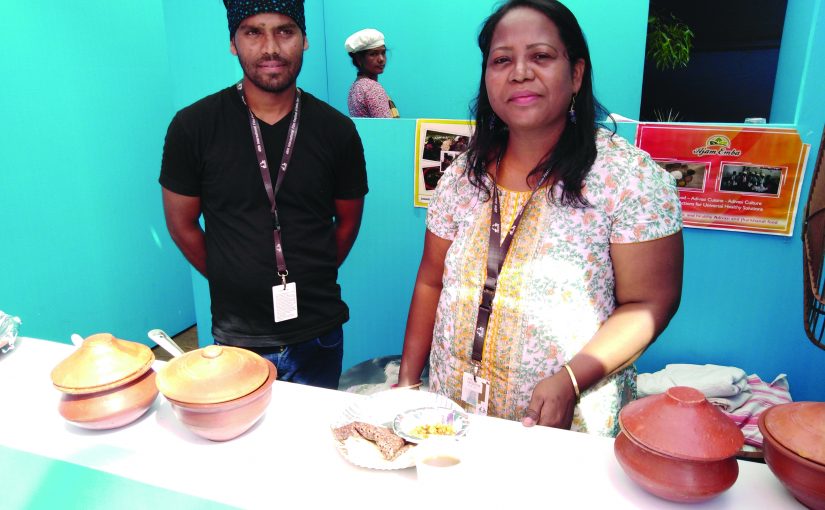 At the IFFI Food Courtyard this year: The cuisine of Jharkhand lured many delegates (clockwise from top left) Aruna Tirki with her menu chalked up for all to see; Manju Bilung who is familiar with Goa and put out several goodies like `dhuska’ and `liti-chokha’ for hungry delegates; a meal combo of chilka/ragi roti with `chole’ and `badam’chutney (`100), and `chaul chai’ (`30) or rice tea, the poor man’s Jharkhandi tea is value for money…it’s a brew of dark roasted rice, sweetened with jaggery and more delicious than coffee!

WHEN the akash neem starts blooming profusely and their silvery white slim flowers start cascading down to form haloes on the ground…I know it is IFFI (International Film Festival of India) time in Panaji! Except that I should mention that this year it’s the hottest November ever and therefore these trees started blooming late mid-November. I cannot take my eyes off them as I catch my first morning film at the Kala Academy or INOX complex and after the film I go looking for what Aruna Tirki at the Jharkhand food stall at the Food Court calls “chaul chai” — slow roast country rice till a burn sets in, pour hot water and brew, sweeten with jaggery, serve reasonably hot (can take the place of coffee).
This chaul chai is delicious I go looking for it along with other things Jharkhandi at IFFI! I would rather drink chaul chai than regular machine made sugar-doped tea and coffee any day. The powers-that-be of Jharkhand are in love with Goa and this year at IFFI there’re two stalls serving such pièce de résistance cuisine as chilka roti, liti-chokha, dal pitha, pyazi, dhuska, chakod jhor (a wild herb soup), also chicken bunjdi by way of a non-veg dish for lunch, there were the sweet gulgula, balushahi, alsi ladu…all may be washed down with chaul chai! One stall was being managed by Manju Bilung and the other by Aruna Tirki which I guess I patronized more for its chaul chai (`30 per little cardboard cup was bit steep but I’d buy a double portion). Regular chai as we know it was retailing at `60 at a refreshments van parked under the grand banyan tree at the INOX courtyard. All aam aadmi delegates complained and brought the tea price down to `20!
Anyway, by noon Aruna at the Jharkhand stall had her thin chilka roti ready to be served with savoury “badam chutney” (euphemism for groundnut chutney) and a little bowlful of “chole” (red gram). An array of chutney also beguiled the senses but then I’m already a fan of food from Jharkhand because they were in Goa earlier, somebody in Jharkhand’s tourism department loves Goa! It’s a pity the team from Jharkhand doing the food presentations were not given red carpet treatment by way of space and assistance (although the stalls were free), they surely deserved it in the interests of better sanitation.
But within a day or two both Manju Bilung and Aruna Tirki’s stalls became popular for their fare although the foreign delegates found the food at Food Court a bit too spiced up for their palate. Not all the foreign delegates though, some I know are veteran India travellers and tuck in spiced up food with gusto. I’m really sorry the self-help women’s groups of Vaishali Naik and company from Goa were not there and along with other aam aadmi delegates missed their excellent economically priced tea, breakfast and teatime snacks and lunch meals — as good as home-made fish curry-rice, poha, puri-bhaji, batat, kanda, mirsang bhajia, shirvoli, besan/sengdana/nachni ladu, not to mention buttermilk, nimbupani. Oh well, the more things change, the more they change I guess for unfathomable reasons!
It was a pretty if hot food court this year with little shelter from the sun in the afternoon, but evenings were fine to chat here over a cool bottle of apple cider ale; yes, ale, absolutely thirst quenching stuff. Ale is a kind of beer said a Simran here but I am not sure, is it? If you’re interested look up the Goa Brewing Co which is specialising in what is called craft beers. The White Owl folk were also here doing artisanal beers (one called Eight-fingered Eddie or something like that, I didn’t taste it).
Then I found myself chatting up business entrepreneur par excellent Varun Chadda of Chandigarh (representing Punjab Agro Juices Ltd) whose stall at the IFFI food court was retailing organically cultivated produce like basmati rice and gorgeous kinno (oranges, `500 per 10 kg box). I bought five oranges at `100 and a packet of two kg basmati rice for `250, final day discount)…there were also other things like wheat dalia, makki atta, etc. Funny, by the time IFFI is over I’m as high on films as well as all things of material value which I’ve purchased for the fun of it or to help someone along!
(Sigh) I’m thinking if I were truly loaded I’d have also purchased a couple of Kunbi sarees which were on show and sale elsewhere at the INOX courtyard, courtesy Museum of Goa. Of course when I returned home the hubby acidly asked if I was doing IFFI films for improving my mindset, or shopping for consumer items at the impromptu IFFI mall at the INOX courtyard. One of these days, I informed him, I am going off to Jharkhand or Arunachal Pradesh…both had decent tourism promotion stalls where delegates dropped by for a respite from the courtyard heat in between films.
This is to say IFFI has its moments and I’m positively in love with the surviving banyan and “apte”/“sonyache” trees here; a tall nilgiri tree has been chopped down. Final day as I said goodbye to IFFI I wished again that the old historical and legendary GMC complex of Panaji, would return to being a health centre-cum-hospice of the very best kind. Instead of continuing to malinger as a courtyard of entertainment and commerce for the powers-that-be of the BJP government of Manohar Parrikar!