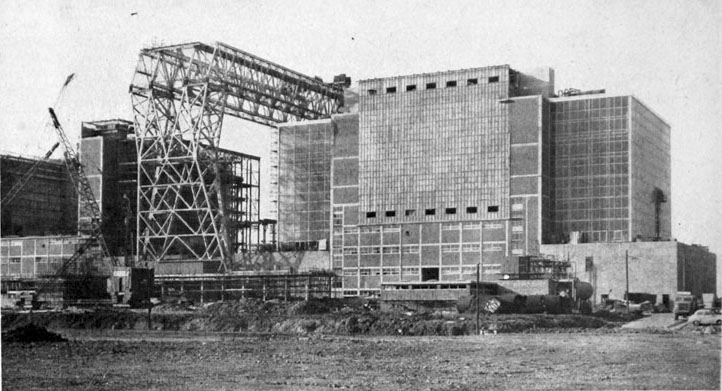 REACTOR: Bradwell nuclear power station fuelled the dreams of 12-year-old Alex Hankey until life took him on a different path

In the second of his series of articles, ALEX HANKEY, recounts how the death of his mother first brought him an awareness of the power of stilling the mind, and how years after he’d moved onto another path of life, recurrent panic attacks brought him back to the path of meditation and yoga

In a first article about my life in India and how I came to live here, I narrated the story of how I became interested in atomic and nuclear physics. At age 12, I was invited to tour one of Britain’s first nuclear reactors at Bradwell, which was then under construction. My conversations with one of the senior engineers in charge of the site gave me what was effectively the outline of a degree course in nuclear engineering and reactor construction. Reactors were a chief interest for some years.

I was also very fortunate because one of the boys in my ‘House’, i.e. dormitory, at my next school, Rugby, was equally interested in science. Eddie Williams and I used to discuss everything we could, and by the time we were fifteen, had reached the point of teaching ourselves. The Mathematics master would let us sit at the back and get on with it, as we both learned at twice the pace of the rest of the class, and he trusted us to do all the exercises fully so that we really understood the material. In the US we might have entered college at age 16.
That experience has stood me in good stead ever since; marvellously, in fact. The essence of deep research is learning to understand new material that no one has previously figured out, and then to learn to explain it to others so that they understand it too, or at least begin to do so. The original researcher always has to think things through more thoroughly than those who come later. Often, he or she only publishes a fraction of all the twists and turns that have to be understood about the new research area in order to arrive at fundamental theories describing it.

THE DEATH OF MY MOTHER

But how did I come to be interested in yoga? After all, yoga is foreign to my upbringing, and nothing overtly within the structure of my childhood could have given me any interest in it. The answer is that when I was 10 my mother died. She had ovarian cancer, and when it was diagnosed, it was so widely metastasized that nothing could be done for her. She had returned from Stockholm, where we were living in 1957, and she passed away on the last day of the year. My father insisted that he should be the one to tell me, but when he returned from the hospital in London to my maternal grandmother’s home in the country where we were staying, he looked so decimated that I literally felt that emotionally I had lost two parents, not one. My anguish was so extreme, that eventually the family left me crying inconsolably.
Soon it came time for my return to my boarding school. Little boys are insensitive and callous. One of them made a remark that I shall never forget: “I heard that your mother died during the holidays,” he said, “you don’t look very sorry about it.” I was speechless. That anyone could be so brutal to someone under such duress was incomprehensible to me. Putting on a ‘brave face’ is one thing, but being assaulted in such a fashion quite another. As bad as any of the college ragging that India has now comprehensively outlawed.
When it came to bedtime, I found a strategy to stop myself from crying on my way to sleep, which I had done ever since that dreadful New Year’s Eve a couple of weeks before. I chose a short prayer, ‘God bless Mummy’, and repeated it constantly until sleep came. As the weeks and months went by, this unusual mantra (for such it became) began to do its work. It slowly brought me to levels of inner silence and bliss that I had no idea existed.
My exceptionally talented sister, Adèle, took on the responsibility of looking after me. She had been studying theatre design at the Stockholm Opera, and at my father’s request, assumed many of my mother’s roles in the household.
When I was twelve years old, she thought she would give me something to understand the spiritual life. Earlier my father had been posted to Spain, and on many occasions we had all visited the famous monastery town of Avila, where the famous St Theresa of Avila, had founded a new branch of the Carmelite Order.
Adèle therefore found a copy of her autobiography published by Pelican. When I read it, I discovered that St Theresa had outlined seven stages in the Life of Prayer, all the way from the bereft beginnings up to her level of experience of Union with God. To my astonishment, I found that I was already familiar with the first two stages, and with bits of stage 3.
Now, suppose that you are given a map, which shows a path leading across a river, over some fields and into a wood. If you already know that that is true, you will be more willing to believe what comes next; i.e. if it indicates that after the wood you will gain views of high mountains, which the path then climbs all the way to the top, you will be inclined to believe what the map says. Just like that, I became deeply aware that there is a spiritual path to be travelled in this life, and that I had already made some progress along it.

Unfortunately, or fortunately as the case may be, my early teenage years were fairly turbulent, and I lost both my faith, and my inclination to use my prayer. I pursued my scientific interests with all my heart, and tended to believe the rather naïve metaphysics which goes along with it.
Also, my father finally remarried when I was fifteen, and the lady concerned had major problems, treating me as a rival for my father’s affections. Her own father had been an Army Chaplain in British India, circumstances which worked against any remaining faith that I might have had.
When I went to study graduate level physics at M.I.T. five or six years later, I was sufficiently advanced to be able to do the first two years study in a single year. In order to save time and graduate sooner, I did so, but the stress of preparing for the exam caused the return of mild panic attacks that had gripped me at the end of my final year at Cambridge the year before. I began watching out for a means to rid myself of such tendencies permanently.

My then girl friend and future wife, Debbie, who had been brought up in Boston, told me about a lecture on Transcendental Meditation, the practice which had brought the Fab Four, John, Paul, George and Ringo, to Rishikesh, where they had studied with His Holiness Maharishi Mahesh Yogi, and subsequently written and published, ‘Yellow Submarine’, and ‘Sergeant Pepper’s Lonely Hearts’ Club Band’ — among their greatest success stories.
We went to the advertised lecture, and both decided to give it a go. I immediately recognized the experience as the same as what my previous mantra had brought me an approximation. My panic attacks had driven me back on the spiritual path. I could only be grateful that, ‘God works in mysterious ways.’
Maharishi (as we call him) had written some beautiful books, which I read in the next seven or eight months, ‘The Science of Being and Art of Living’, and his Translation and Commentary on Bhagavad Gita, Chapters 1 to 6.
Later Debbie and I went to weekend residential courses, and to a one-month course in Eureka on the coast of northern California, where I was able to ask questions of Maharishi himself.
Thus it was that I came to be involved in India’s ancient wisdom, and slowly come to the decision to make it my career, rather than the theoretical physics, in which I had nearly 10 years’ training.