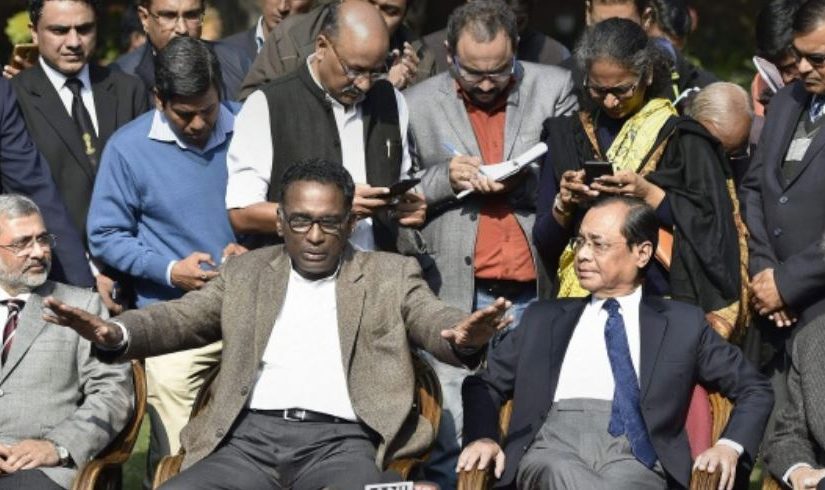 Breaking his silence after his retirement, Joseph Kurian revealed that the impression among the rebel judges was that the independence of the judiciary was compromised as the then Chief Justice Dipak Misra was taking his orders from politicians

When four judges of the Supreme Court organised an unprecedented press conference in January this year, they said it was to talk about issues plaguing the apex court, following the case on the death of special CBI Judge B.H. Loya and the roster of justices. Now, one of those judges, Justice (retired) Kurian Joseph, has told the Times of India that the four judges suspected that then Chief Justice Dipak Misra was being controlled from the outside.
Justice Joseph, who retired on November 29, said he and the three other senior-most Supreme Court judges felt that Justice Misra was allocating cases to judges with a political bias.
“There were several instances of external influences on the working of the Supreme Court relating to allocation of cases to benches headed by select judges and appointment of judges of the Supreme Court and high courts,” he said.
Justice Joseph said that they felt “someone from outside was controlling the CJI”. The other senior judges first “met him [the CJI], asked him, wrote to him to maintain independence and majesty of the Supreme Court” — but “when all attempts failed, we decided to hold a press conference”.
On how and why the move was initiated within four months of Misra becoming the CJI, Justice Joseph said there were “starkly perceptible signs of influence with regard to allocation of cases to different benches selectively and to select judges who were perceived to be politically biased”.
He said it was a unanimous decision by all the four judges — the others being J. Chelameswar, Ranjan Gogoi and Madan B. Lokur — to organise a press conference. “Justice Chelameswar was the initiator of the idea of press conference. But we three agreed with him.”
At the conference, Justice Gogoi stated that it was necessitated by issues surrounding the case on the death of special CBI Judge B H Loya.
Justice Chelameswar had termed the development as an “extraordinary” event in the history of India and its judicial institutions.
“Sometimes, the administration of the Supreme Court is not in order. There are many things less than desirable that have happened in the last few months… As senior-most justices of the court, we have a responsibility to the nation and institution. We tried to persuade the CJI that some things are not in order and he needs to take remedial measures. Unfortunately, our efforts failed. We all believe that the Supreme Court must maintain its equanimity. Democracy will not survive without a free judiciary.”
Justice Chelameswar also told the media that the four judges had met the CJI earlier the same day. “This morning we went to the CJI with a specific request but unfortunately we were denied.” However, the judges did not provide the specifics of their discussions with then CJI Misra.
What was clear was that the four judges were upset that a petition seeking an investigation into the death of Judge Loya was allocated to a bench headed by Justice Arun Mishra.Arun Mishra later recused himself from the case, after a showdown with Justice Chelameswar at the routine morning meeting of Supreme Court judges on January 13.
Soon after, the issue was also raised in parliament. A motion was moved by Opposition parties in the Rajya Sabha, alleging that the then CJI was getting cosy with the establishment. M Venkaiah Naidu, then the chairman of the Rajya Sabha, rejected the motion for the lack of “convincing grounds”.
In the interview, Justice Joseph, who rose to the number three position in the Supreme Court, also spoke about how the “minority tag” was a hindrance to judges from religious or ethnic minorities.
He expressed the apprehension that this situation could worsen in the times to come. “Even if a member of minority community has outstanding merit, he is recognised only because of his minority identity and not merit. The minority tag is always linked to his or her selection to a post.”
In his own case, Justice Joseph said, he had initially been considered on the basis of his minority identity, but was eventually appointed to the Supreme Court on merit. He indicated that if he had been appointed on the minority tag, he would have been CJI after Justice Misra.
“I was also considered that way and not on my merit,” he said. “But towards the end of my career, there was poetic justice. If I were to get into Supreme Court to fill the slot that fell vacant on Justice Cyriac Joseph’s retirement, then I could have become Supreme Court judge in 2012, before Justice Ranjan Gogoi and Madan B. Lokur. But I was selected on merit and hence was sworn in as judge of the Supreme Court in March 2013.”
Justice Joseph said the issue of the minority tag obstructing merit could get worse if corrective steps are not taken. When it came to selection of Supreme Court and high court judges, he said, the perception could be corrected “if selection is purely merit based without considering caste, creed, religion or region of a person.”
He said, “When a person spends years as a judge of the high court, he actually forgets all biases and misgivings based on community, religion or cultural diversity. His focus is only to do justice.”
Justice Joseph, however, demanded some relaxations when it came to giving representation to diverse communities, cultures and regions. “There has to be some consideration for poor and weaker sections. Even the Constitution makes such provisions to extend a helping hand to poor, economically and socially backward classes as well as women. I call it Constitutional compassion. This must be there while selecting a person as a judge and even while deciding a case.”