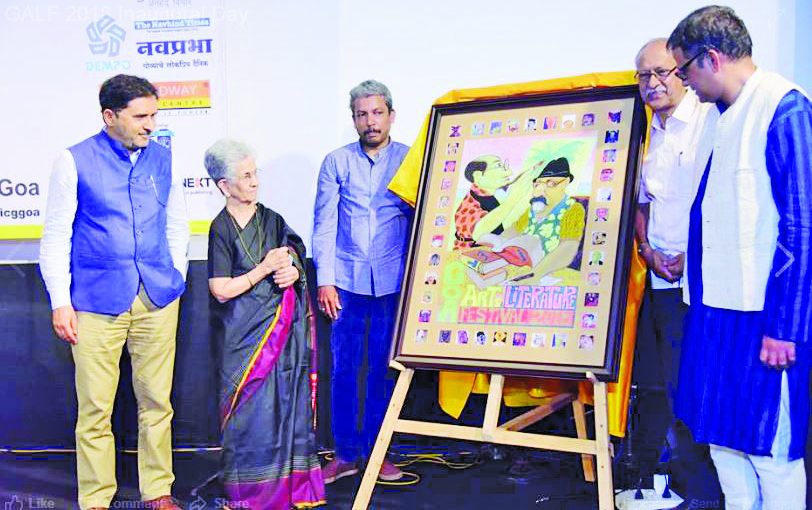 TODAY who is to be envied, India or Pakistan? Asked celebrated short story writer, novelist Shashi Deshpande, as one of the keynote speakers at the opening function of the ninth edition of the Goa Arts & literature Festival at the Maquinez Palace on December 6, 2018. There was no mincing of words with the writer as she traced recent events worrying the people of this country from the killing of intellectuals and journalists to the “era of mobs” which seems to be ruling us today.
In an exhaustive talk the author of `The Long Silence’, `The Dark Holds No Terrors’, `A Matter of Time’, her latest novel `Shadow Play’ expressed her dismay at the political turn of events in the country ever since the BJP came to power with its narrative of Hindutva politics and a Hindu rashtra. The Dharwad-born daughter of famous Kannada dramatist and writer Srirang had returned her Sahitya Academy award after the killings of several academic and literary personalities in the country and expressed her anguish and fears if the government takes to patronizing mobs to express its ideology of hatred for the minorities. She said that it would be difficult to accept a political dictum of a Hindu rashtra when the country has hitherto lived with Nehru’s “unity in diversity” philosophy and expressed her anxiety about where such divisive politics of the day will take the country where women too are perceived as lesser human beings! It was a very thought-proving talk well-received by the audience.
Second keynote speaker Jerry Pinto too acknowledged that there is more fear than reassurance in the country today in his talk titled, “A life in words in a time of fear” while Goan literateur Damadar Mauzo detailed how GALF has grown over nine years and is now all set to play a bigger role in literary matters. ICG director Dr Pushkar who gave the welcome address said that Goa is a tiny marginal state for the country and known mostly as a tourism destination, therefore an event like GALF is important for it offered exposure to a literary culture and a platform for the growth of Goan writers. He added that for a small festival it managed to pack quite a lot.
A special poster designed for GALF by artist Viraj Naik was unveiled ceremonially and Sumana Roy reading from her collection of poetry captivated the audience, along with a monodrama titled “They Fell One by One” presented by Impana Kulkarni, Shane Fernandes, Ryan D’Costa, Richard Pereira and Kedar Dicholkar. Deborah Baker’s book “The Last Englishman: Love, War, and the end of Empire” was released. The rest of the festival’s deliberations take place at the International Centre Goa over Friday and Saturday (Dec 7 & 8).