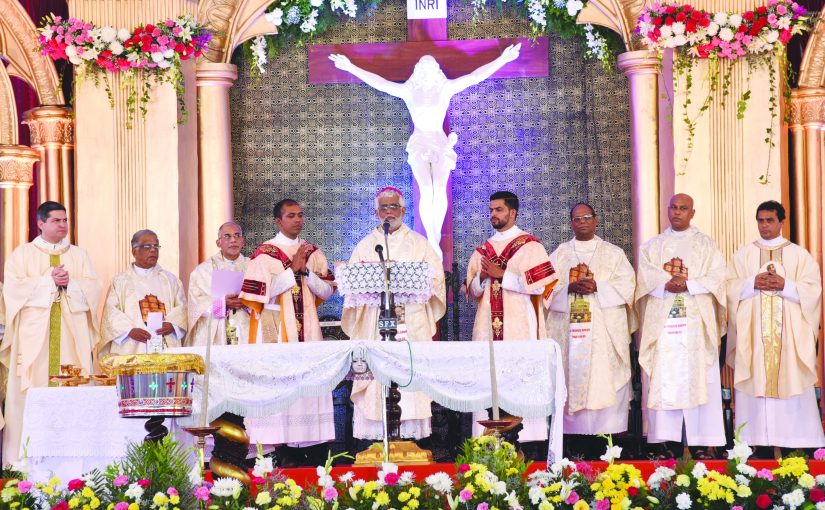 HAPPY FEAST: Cutting across faiths, people from across the state and beyond flocked to attend the annual feast mass of St Francis Xavier at Old Goa on December 3, 2018. St Xavier is considered the patron saint of Goa but his popularity transcends borders. This year one thousand pilgrims from Sindhudurg, Belgaum and Kolhapur undertook a padayatra to Old Goa and partook in the special novena mass on Sunday afternoon

Dear Mr Manohar Parrikar, It’s your birthday on December 13 and the best gift you can offer to the people of Goa is to gracefully tender your resignation and allow the State to move on. Goa cannot suffer any longer on account of your precarious state of health.
Now that you are health wise very incapacitated you should not continue as MLA of Panaji and Chief Minister of Goa. There are manifold grounds why on account of your hunger for power and sheer arrogance you should be put to pasture.
You may recall that over two decades ago, like many others, I too held you in great respect while even working alongside you and the BJP, believing that you were a ray of hope for Goa. But I had to part company after I was faced with evidence that you were very corrupt, communal and casteist.
In 2007 you had publicly vowed that it would be your last election. However in that greed and lust for power you went back on your own word and contested yet again in 2012 and became Chief Minister after promising the people of Goa a parivartan by way of good governance and zero tolerance to corruption. But given your string of swift U Turns, the people of Goa soon realised that by trusting you and electing the BJP they landed from the frying pan into the fire.
Panaji Constituency, which now includes Ribandar, sadly remains decaying and sinking despite having you as its MLA for over two long decades, thrice the Chief Minister and even being the Defence Minister of the country. With all that power at your hands you could do nothing for your State and even your constituency. Incredibly, you had the cheek to last year seek yet another term as MLA despite your grim performance or should we say non-performance by falsely promising that in 365 days all the problems of Panaji would be resolved.
Over the years while you allowed Goa to sink you have minted a fortune for your family to merrily feast on for generations to come
So, Mr Parrikar, at least for the sake of what remains of Goa, it is time for you to gracefully pack up and hang up your very soiled boots so that Goa which today has sadly become a gambling, prostitution, narcotics and crime destination finally may see some much needed Acche din.
In the words of Abraham Lincoln ‘You can fool all the people some of the time, and some of the people all the time, but you cannot fool all the people all the time”
Sir, hoping that in a miracle better sense will prevail in you so that Goa can move on. Wishing you a much deserved and long overdue retirement.!
— Aires Rodrigues, Ribandar

UPA ECONOMY WAS BETTER
For investors in the stock market, including Foreign Institutional Investors (FIIs), it is necessary to clarify the authenticity of GDP figures that have led to the downward correction of GDP figures of the UPA regime.
For those who doubt the veracity of the original figures during the UPA regime, all that needs to be done is to refer to the business dailies in India during the UPA regime for the purpose of ascertaining the profitability and thus the earnings per

share (EPS) of all the listed companies in India.
Without a shade of doubt, except for a handful of companies, the EPS of the various companies, after calculating for splitting of shares and bonus issues of the PSBs, PSUs, MNCs and the private companies, it is an open secret that the EPS figures of all these mentioned types of companies were much higher and also the P/E (price to earning ratios) was much lower, to mean that the stocks in the BSE and NSE were performing better during the UPA regime, that too despite the price of crude oil having been higher during the UPA regime as also the bank interest rates and therefore rates for loans were much higher during the UPA regime.
Also, all share values were very compact and sturdy compared to the now inflated figures which have a very high P/E ratio and therefore are now less solid. The NDA govt did all to inflate prices of stocks by jacking up the Sensex and the Nifty, an illusion that the UPA regime did not resort too. Thus relatively, it is absolutely obvious that all types of listed companies definitely fared better during the UPA regime and thus the original higher GDP figures were a true reflection of the economy at that time.
However investors can modify their portfolios in such a manner that they do not incur losses, but on the contrary make profits by investing their money in listed companies with strong fundamentals and monitor the portfolio based on every quarterly results. There are a few very high performing stocks that are valuable in the present regime of higher Sensex and Nifty regimens. PSBs and PSUs have under performed considerably, while the MNCs and private companies have maintained robust earnings.
— Elvidio Miranda, Goa