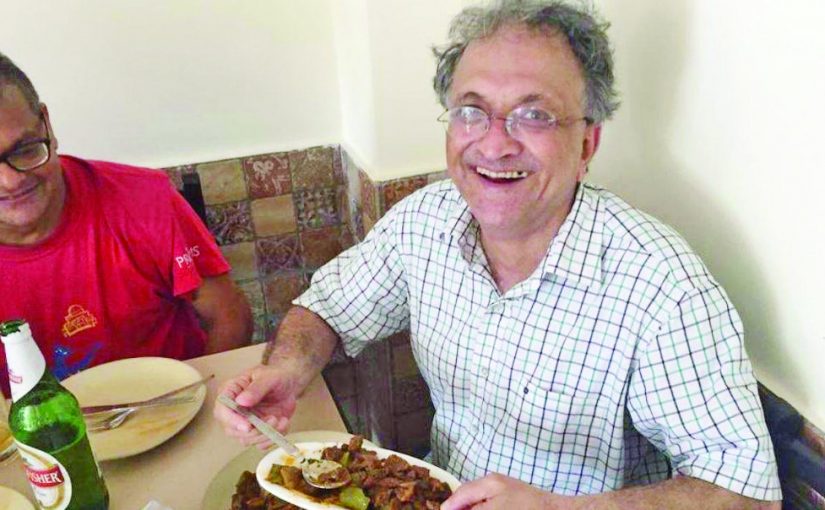 SAFE: Goa is probably among the few states in the country where the Sangh Parivar has not either banned beef or harassed and prosecuted those who have stored or eaten beef. But don’t tweet images of yourself eating beef if you do not want to get in trouble in your home state

Ramchandra Guha, noted scholar and activist located in Bangalore, posted a tweet of himself eating beef in a Goa restaurant. He was flooded with threats and is now under police protection at his residence at Bangalore even though he has withdrawn the tweet

A day after social media fury over his beef tweet from Goa, which also led to questions about his vegetarianism, Ramchandra Guha deleted the picture of his lunch in Goa and claimed he was getting threats.
He wrote: “I have deleted the photo of my lunch in Goa as it was in poor taste. I do wish however to again highlight the absolute hypocrisy of the BJP in the matter of beef, and to reiterate my own belief that humans must have the right to eat, dress, and fall in love as they choose.”
He also posted “This threatening tweet below is from a former official of the Research and Analysis Wing. I would like to place it on record, and will do with every subsequent threat received.”

R.K. Yadav@rawrkyadav
Replying to @ChandrusWeb
If a Hindu eating beef & publicise it he is stigma on this religion. One Ramchandra Guha is doing so. He is trying to tease whole of Hindus by this dastardly action of such publicity. Shd be given befitting reply.

He added that he was getting threatening calls from a man calling himself Sanjay in Delhi and that he had threatened Guha’s wife as well.
He also quote-tweeted a tweet of a former RAW official and wrote: “This threatening tweet below is from a former official of the Research and Analysis Wing. I would like to place it on record, and will do with every subsequent threat received.”
Guha wrote: “After a magical morning in Old Goa we had lunch in Panaji, where—since this is a BJP ruled state—I decided to eat beef in celebration.”
To this repartee, one Twitter user replied: “One may have political leanings / views but why say celebrating an animal’s slaughter. Sad to see a historian tweet such stuff. What will the lesser-read do?”
This led Guha to agree with the Twitter user and write: “Take your point. The photo was cavalier and unnecessary. The argument about the freedom of choice as regards diet could have been made without it.”
However, Guha had in the past stated that he was vegetarian, which led Twitters users to ask how a vegetarian was eating beef.
“Very gracious of you to accept it sir! Now, would you confirm if you’re a vegetarian or not? As some time back you tweeted about being a vegetarian? Was it false just like our history book right now?”
To this Guha pointed at an old article where he said he became non-veg during his boarding school days in Doon.
“As this interview from 2013 explains, for some years I was a non -vegetarian, but then reverted to being a vegetarian, purely for aesthetic reasons. https://www.thehindu.com/features/metroplus/Food/right-in-the-centre/article4265249.ece …”

BJP — no beef with beef outside cow belt

Guha was perhaps referring to the discrepancy of BJP’s stand on beef in different states. While in the so-called cow belt, the party’s firmly against consuming beef, it has no such moral compunctions in states like Goa or Mizoram.
In fact, Chief Minister Manohar Parrikar had said in the Goa Assembly in 2017 that the state’s meat traders got its excess beef supplies from Karnataka.
In Meghalaya, ahead of Assembly polls in 2017, BJP spokesperson J A Lyngdoh said in a statement that the party “has already clarified that it (beef ban) will not be imposed in the northeastern states. Livestock is a state subject. It is up to the states to decide”.
He also said beef ban would not be imposed in the state, adding preventing cow slaughter was neither a good economic measure nor had constitutional backing.
In Mizoram, State BJP chief J V Hluna said that the Bible allowed the state’s majority-Christian population to consume beef: “When our party president Amit Shah was in Mizoram, we asked him about the controversy over banning beef across India. He assured us there is nothing to worry and asked us to follow our tradition. And, as per Bible and our tradition consumption beef is allowed.”
In 2015, Minister of State (Home) Kiren Rijiju, who is from Arunachal Pradesh had said: “I eat beef, I’m from Arunachal Pradesh, can somebody stop me? So let us not be touchy about somebody’s practices. This is a democratic country. Sometimes, some statements are made which are not palatable. If a Mizo Christian says that this is the land of Jesus, why should someone have a problem in Punjab or Haryana? We have to honour the sentiments of each place and each location.”