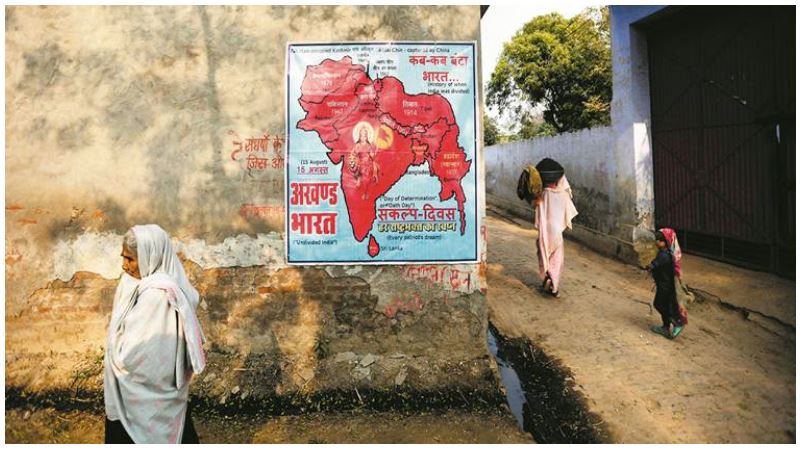 DISTURBING: A map of ‘Akhand Bharat’ outside the house of Bajrang Dal’s Yogeshraj Singh, the prime accused in December 3 violence. The murder and the subsequent lack of action has disheartened the police force further

Ironically, circle officer SP Sharma, who had investigated the notorious Mohammad Akhlaq lynching on suspicion of storing beef, was murdered by gau rakshaks on December 3, 2018. The top suspects are a mob led by the 25-year-old convenor of the Bajrang Dal in the district, Yogesh Raj Singh. Chief Minister Yogi Aditiyanath’s immediate reaction was to show greater concern over the cows then the death of the officer…

In July 2018, when Circle Officer S P Sharma joined his new posting at Siyana in Bulandshahr district of Uttar Pradesh, Superintendent of Police Pravin Ranjan Singh gave him a list of troubles he was going to face. Top of the list was the Bajrang Dal’s 25-year-old district convenor Yogeshraj Singh. The SP also told his subordinate that this was a problem that was to be “managed”, if not necessarily “solved”.
On December 3, a mob allegedly led by Yogeshraj went after Sharma and two others, who tried to save themselves by locking themselves up in a 10X10 ft room at the Chingrawathi police chowki, about 5 km from Siyana police station. Sharma, 50, had a narrow escape.
Angry over alleged cow slaughter, the mob rained stones and set the chowki on fire. Sharma recalls hearing what sounded like the whistle of an LPG cylinder about to burst after the crowd failed to break open his door. He escaped by breaking through the ventilator of the room.
Within minutes of that attack, the mob had killed Sharma’s subordinate Subodh Kumar Singh, the SHO of Siyana police station — his body found hanging upside down out of his police jeep in nearby fields, a bullet lodged in his head.
As the news of a police officer dying at the hands of a mob, in the latest episode of cow vigilantism in Uttar Pradesh, sent shockwaves, it was also reflective of the circumstances in which police operate in this region, walking the intersecting lines between crime and politics, where problems like Yogeshraj, born of that mingling, must be “managed”.
The son of a farmer from Nayabans village near Siyana, Yogeshraj’s association with Sangh activities began eight years ago. But it was only since Yogi Adityanath came to power that he rose to prominence in Bulandshahr.
A day after the December 3 incident, the Chingrawathi police chowki — about 30 km from Bulandshahr, on the road linking the city to Siyana — wears a forlorn look. A few constables and home guard personnel with 303 rifles mill around inspecting the charred motorcycles and vehicles, and the marks of bricks and stones left on the walls, by the mob.
“I have never felt so scared in my life,” says Chanderpal, a home guard who was locked up in the chowki along with CO Sharma. “I climbed on a steel trunk and with the help of CO sahab broke through the ventilator. We then crawled out one by one,” he says, adding, “Thankfully, the contractor had used bad quality construction material. Or else we would have all died.”
Chanderpal has not eaten or slept for the past two days. “The only thing I could gulp down was a bottle of whiskey last night. I am still terrified.”
Five kilometres away, the Siyana police station is a British-era structure, with a large gate and piles of rotting vehicles impounded by police adjacent to it. After the incident, officers who served here earlier have been summoned to boost the morale. Altaf Ansari, a former in-charge of the station, has been called back from his posting in Ahmedgarh nearby. “The SHO is dead. So Ansari sahab, who served here for eight months in 2017, has been brought. He knows the area and the people,” says Sheeshram, the chief record keeper of the police station.
Subodh Kumar Singh, who spent barely three months at the station, is remembered fondly. Most, including SP Singh and locals, say he was “professional, honest and brave”. His pet dog always kept him company.
Singh was “fearless”, says his driver Ramashray. “He would have survived (that day). When the public was pelting stones, I asked him to jump into the vehicle so I could speed off. But he did not. He kept trying to control the crowd. I ran away. A few