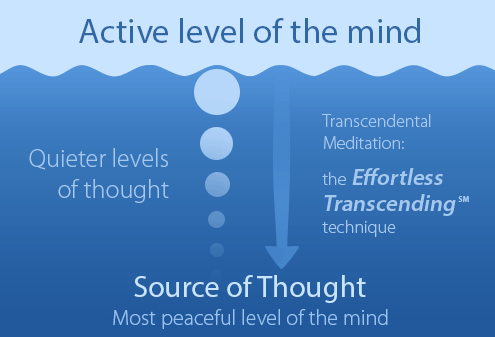 HEALING: The Mato Clinic says transcendental meditation is a simple, natural technique… This form of meditation allows your body to settle into a state of profound rest and relaxation and your mind to achieve a state of inner peace, without needing to use concentration or effort

In his continuing series of articles, ALEX HANKEY continues his story of how he came across many unexplained phenomena that increased his interest in meditation and Vedic wisdom…

This is the fourth article in a series describing how I, as a western scientist trained in theoretical physics at the University of Cambridge and Massachusetts Institute of Technology, have become one of India’s leading scientists in Yoga and other ancient Indic sciences. The first article told of my early interest nuclear reactor physics, and my visit to a nuclear power plant construction site at the age of 12. The second article then explained how, at the age of 10, I was led to take up meditation, and later, at M.I.T., was formally trained in Maharishi Mahesh Yogi’s technique of Transcendental Meditation, going on to become a ‘checker’ of the technique.
The third article described the results of checking meditation in terms of developing the ability to ‘witness’ the other three states of consciousness, when established in ‘pure consciousness’. It explained how that state of pure consciousness is the state of the ‘pure witness’, the well-known concept of Sakshi in Sanskrit literature. The state is so different from the three states, waking, dreaming and deep sleep, that it deserves to be considered a state of consciousness in its own right, ‘Pure Consciousness’. The idea was justified by a special ‘contingency table’ called the ‘Kanellakos Diagram’. The Upanishads name the state of pure consciousness, “Turīya”, stating that it is the fourth state of consciousness, Chaturtham.
The third article also described how regular meditation develops the possibility of becoming aware of more ‘subtle’ levels of experience, of which ‘the witness’ is but one example. It ended when my then wife, Debbie, and I were attending a ‘One Month Summer Course’ at a college in northern California with HH Maharishi Mahesh Yogi in the summer of 1972.

While on that Summer Course, we were given another profound revelation about the reality of the subtle realm. One of our group was a young man of 17 or 18 years of age. One afternoon, he announced in our group meeting that he had something special to tell us. As a preliminary, he told us confidentially that he was psychic, and possessed the ability to see auras — coloured fields around the human body that all of us seem to possess, but which only a very few special people seem to be able to perceive — because they are ‘subtle’.
He related that when Maharishi had first come to visit the course a few days earlier, he had expected to see a large aura around him, of the kind that are reputed to distinguish great saints from the rest of us. He had been shocked to see nothing at all — not even the kind that he could perceive around those leading the course. Nothing at all; deeply mystifying!
Then, that morning, the mystery was solved: he had come to the College Gymnasium with its capacity for 1,500 people, where the course was being held, a little late for the start of the meeting. When he came around the corner of the adjacent building and could see the triangular gymnasium, he realized that Maharishi had already arrived: all over its spherically-shaped roof was the largest aura he had ever seen, with all the colours of the rainbow perfectly distributed within it. Maharishi’s aura contained the entire building together with all us course participants. It was protecting us all from negative spiritual forces.
A similarly striking story, but one of a slightly different kind, had been related to me one evening at the TM Centre in Cambridge Massachusetts, when I was still finishing my Phd thesis, and before we had departed for California. One of the TM teachers told me how two colleagues had been sitting on a sofa looking at a Theosophical book of paintings of powerful nature spirits, or Devas, as the Indian tradition calls them. “Oh! Look at that one”, said one to the other, pointing to a picture in the book, “I saw that one, when I was on my Teacher Training Program in Estes Park last year”. Her course had been held in the Estes Park Resort, in Rocky Mountain National Park, during the autumn of 1970. When they looked at the caption below the picture, it said, “Lives in the Mountains in Rocky Mountain National Park!”
When I hear such stories, I dwell on them, I do not dismiss them out of hand as unscientific. I fully realise that single observations do not form the basis for a scientific theory. To structure a theory or phenomenology for experimental testing, much greater depth is needed. But a first, approximate understanding needs to be developed preliminarily. The impression that those early stories of the subtle realm had on me inclined me to take them seriously. I became interested in possible physics behind them. That story will be the subject of future articles.
After that summer course with Maharishi in Eureka, northern California, Debbie and I went to Palo Alto. We lived just down the road from the Stanford Linear Accelerator Center, SLAC, where I was holding my post-doctoral position. We continued to check meditation every week, as a means to help us qualify to go to our Transcendental Meditation Teacher Training Course being held in the middle of the winter of 1972-1973 in a beach resort called Las Antillas, on the coast of the very south-western edge of Spain.
A few days before our charter flight to Seville, there was a once-in-ten-years snow fall on Mount Hamilton at the south-eastern end of the San Francisco Bay area. We went and made snowballs and enjoyed the melting snow in the afternoon sunshine. It seemed a most auspicious omen pointing to coming advances on the path to the purity of inner sunshine of atma-swarupa mentioned in Patanjali Yoga Sutras I.3: viz. ‘Tadā Drashtuh Svarüpe Avasthānam’, ‘From that (purity of mind) the inner light shines forth.’
On our Teacher Training Course, we learned to conduct the Seven-Step set of Seminars, designed by Maharishi for professionals to learn his meditation technique over a one-week time period. They consist of two introductory lectures, followed by a personal interview with the teacher.
Step 4 is personal instruction or initiation, technically Anugraha into the Adishankara Nathasampradaya, since Maharishi’s Guru had been Jagadguru Shankaracharya of Jyotir Math; finally, steps 5 – 7 comprised three two-hour seminar meetings providing all information necessary for a person to practice the technique without problems by themselves at home.
The entire course is consistent with the wisdom of Maharishi Patanjali’s Yoga Sutras (PYS), particularly its vitally important instructions to maintain complete innocence, i.e. to have no expectations; not to concentrate; and not to mind thoughts. The latter, we describe as a natural aspect of meditation, in keeping with PYS Pada IV’s statement that thoughts are side-effects of the removal of Sanskaras in the Chitta. They are therefore a sign of successful practice.

One of the most amazing aspects of our Teacher Training Course (TTC) was the lecture given on our final morning. And it was not given by Maharishi. Rather, a young man of 18 from Chicago gave it. Andy Rymer had attended two TTC’s in a row, in order to gain as much personal development as possible from the Sadhana involved. Andy was another natural psychic.

Andy had worked with the police in his native Chicago to help solve crimes, a fact that so perturbed Maharishi, that he initially forbade Andy to attend the course. He relented when he was convinced of Andy’s sincerity, and his willingness to give up such non-spiritual uses of his God-given powers.
As a result of his lengthy, six month program of: long meditations; daily lectures; instruction in teaching all the lectures and seminars; and in performance of Guru Puja (for Anugraha); and personal meetings with Maharishi, who in the end showed great interest in him, Andy passed though many of the stages described in the ancient Vedic texts.
For example, he was fully aware of the witness state of consciousness. He had questioned Maharishi about it in detail, and also about further development of his natural abilities of subtle perception. He had passed through the first of the higher states of consciousness, Cosmic Consciousness, as described by Maharishi in his first book, The Science of Being and Art of Living; he had next attained the state of God Consciousness described in Maharishi’s Translation and Commentary on the Bhagavad Gita. He had finally become established in the state of Unity Consciousness, that Maharishi had more recently described in his 33 video-taped lectures on the Science of Creative Intelligence, where he details his classification of ‘Seven States of Consciousness’.
In the story that he told us of his stages of personal development over the previous six months, Andy was thus able to attest to the veracity of everything in Maharishi’s lectures on such esoteric matters. It was one of the most profound intellectual experiences of my life. Here was one of us, a westerner, talking in detail about personally experiencing some of the most refined and inspiring readings in the Upanishads and other parts of the Vedic literature. Something impossible to forget!
One of Andy’s most striking points, and one on which Maharishi commented in detail later, was his description of Maharishi’s use of the Vedic Mahavakhyas to confirm his at-the-time mystifying changes in experience that he had been undergoing.
As God-consciousness developed fully, further refining his earlier levels of subtle perception, he had become aware of a highly satisfying, vibrant liveliness surrounding all objects of perception; but when he entered into the level of unity consciousness, at the foundation of Advaita Vedanta, the lively vibrancy had given way to a stillness that seemed to pervade everything, and which had quite taken him by surprise and quite disconcerted him. Was he slipping backwards after gaining so much?
But when Maharishi gave him the words, “Thou Art That”, from the Sanskrit, “Tat Tvam Asi”, and he realised that he was now experiencing his ‘Self’ (Atman) as an all-pervading ground of reality for everything, i.e. Brahman, his doubts were resolved. Between them, Andy and Maharishi were thus able to convey to us all that Vedic wisdom is no idle philosophy, but a powerful system of exposition of the nature of both the Self and the reality of the apparently external world of sense perception.