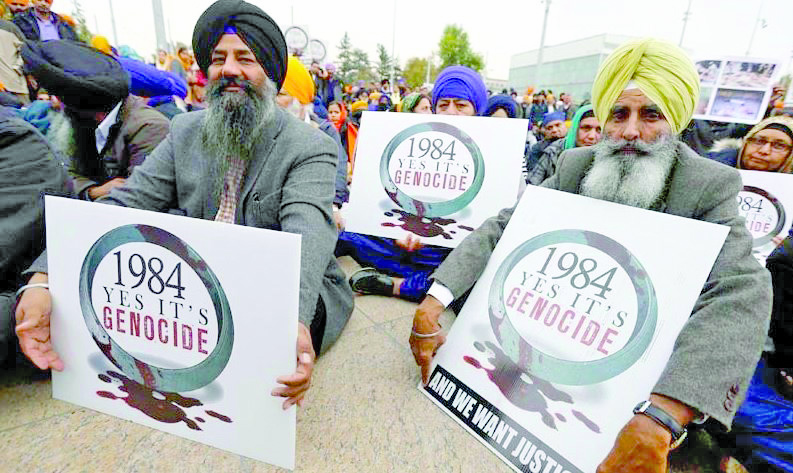 SET BACK: The life time sentence awarded to Sajjan Singh for inciting violence against Sikhs after the assassination of Indira Gandhi may weaken the Congress charges against Modi for the post Godhra riots. Modi is already saying ‘you are as guilty as we are’

We need to take a hard look at the BJP defeat in the semifinals in which it lost in all six states that went to polls. Will the Congress be able to consolidate its lead — particularly since its charges on Rafael have been dismissed and a leading Congress leader, Sajjan Singh, has been convicted for the slaughter of Sikhs following the assassination of Indira Gandhi by her Sardar bodyguards

Results of the recently held Assembly elections — particularly in the key states of Chhattisgarh, MP and Rajasthan — have suddenly altered the political barometer. Of course, parties draw conflicting conclusions from the same outcomes. Just as opponents of the BJP see this round as the beginning of the countdown for the BJP’s fall, the BJP is straining every nerve to argue that state elections have nothing to do with the national outcome — or even the national mood.
Sure enough, in two of the three BJP-ruled states the party was in power for too long and the law of change was bound to catch up with it sooner or later. Besides, vote shares, seat difference in MP and margins of victory, all show the thinness of the “victory” of the Congress in Rajasthan and MP. Add to this the Congress’ inability to retain Mizoram (or even remain a strong contender) and failure to dent the TRS in Telangana and the limitations of the Congress appear stark. So, there is ground to doubt if the Congress “won” but the BJP’s defeat is an undeniable reality.
As such, the story of this round of elections boils down to the sudden crisis faced by the BJP. With Lok Sabha elections only months away, this setback will haunt the party in the run-up.
One reason for this is the number of seats it may now lose from these states where it won as many as 62 last time. Even if it loses half of these, the dream of returning to power would have receded. But it is not merely the mechanical calculation of loss of seats in these states; it is also about image and optics — weapons the party relies heavily on. Since Gujarat, the invincibility of the party has been under a cloud. Now these defeats will send a message across the country that the BJP, too, is subject to electoral ups and downs.
Thirdly, its defeat and the limited Congress surge would have a combined effect on the non-BJP coalition. Indeed, non-BJP parties would be making a mistake if they carry the coalition logic too far and harp on an all-India non-BJP coalition. Nevertheless, the recent election results open up rich possibilities of localised or state-level coalitions that would effectively stop the BJP from picking seats in many states.
But these are contingent factors that the BJP may hope to overcome with clever political moves. Yet, the outcomes of the recent assembly elections still signify critical times ahead for the party — and for a far more serious reason. Ever since the results started trickling in, the party has suddenly become orphaned. Barring a curt and formal note by the Prime Minister, there is silence. In contrast to chief ministers owning up responsibility, the real leadership of the party seems to have taken the maun vrat.

This silence may be due to genuine shock; since December 2013, Narendra Modi has been the flagbearer of the party’s machismo and aggression. Defeat is something this image cannot accommodate easily. But one suspects that the reason for silence and confusion is deeper. From the time he rose on the national scene, Modi has presented a consistent narrative. There are four core elements of the Modi-narrative: Exaggerated reading of the 2014 result, permanence of popularity, claims about performance and vilification of the Opposition.
When the BJP won the 2014 elections, it had an option of focusing on governance and interpreting the results as a product of the electoral cycle in a democracy. Instead, the party wove a folklore around the victory and understood it as a “mandate” to build a “new” India. The same over-reading was attached to the UP results later. For its cadres, this narrative became the core motif and BJP supporters, on the ground or in virtual spaces, began going berserk. Building a new India involved destroying much of the older regime in an ideological and physical sense. So, Nehru-bashing and removing any façade of institutional governance became the programmes of the party and government. The assumption behind this assault has been that popularity is permanent — or can be made permanent using every trick in the trade. The idea of Congress-mukt Bharat was not only an over-reading of 2014, it was also overconfidence in the durability of the popularity and ability of the leader to deliver electoral victories always and everywhere.
The BJP narrative also had a third element consisting of claims about performance. BJP state governments were supposed to be better governed, the Gujarat model was the buzz of the moment and the new Central government was seen as an epitome of governance. Finally, the BJP claimed to be the only claimant of national interest and all opposition was thrown into the dustbin of contempt. The Congress and its top leadership were projected, consistently, as crooks. This tendency sat uneasily with the experience of mutual accommodation during the past 25 years when parties shared power not just in coalitions at the Centre but also in different states.
The outcome of the Assembly elections has ensured that the cracks in this narrative will begin to show and it will meet challenges from without. This is where the importance of the result resides.
There are different ways in which the cracks will manifest. The crudest manner will be intra-party dissension. There are many ministers who were always wary of Modi. They can now rediscover their concerns. Far too many supporters have joined the bandwagon mainly because it assured them proximity to power. They would distance themselves from the party and its larger claims.
Despite its limitations, the Congress may present an external impetus to the process of bringing politics back to normal. Unfortunately, in its manifestoes as also the press conference of the party president, the Congress seems to be groping. Though it sees light at the end of the tunnel, it is unlikely to infuse the political system with a counter-narrative in the near future. So, external pressure for widening the cracks may have only limited traction.
But the results of these elections have yet another message as far as the Modi-Shah narrative is concerned. By no means was the Congress a great alternative; its factionalism, adherence to old factional rivalries, tame adoption of a socio-cultural agenda similar to the BJP and its indetermination in matters of economic policy were there for all to see. But a crucial message from the elections is that voters do not wait for an “ideal” alternative. Unlike theoreticians, voters are aware of the job: To choose from existing options rather than wait for the best option to emerge. They did just that in the recent elections. This may produce clumsy outcomes and certainly it won’t bring great transformations, but it may just bring the BJP’s narrative down to earth.