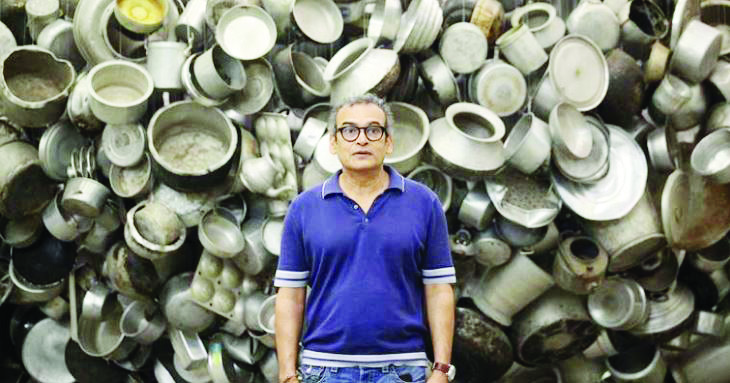 Artist Subodh Gupta stepped down from his position as the guest curator at Serendipity Arts Festival a day after a series of anonymous sexual harassment allegations were made against him. He also denied the allegations of sexual harassment against him.
On December 13, a post by an Instagram account ‘Scene and Herd’, which appeared to be from a former female associate, alleged several instances of sexual misconduct (reproduced below). One such instance was of Gupta asking “a senior gallerist pointing at a new assistant he had hired, ‘do you think I should f**k her tonight?’” Another alleged that Gupta repeatedly asked an assistant to pose nude for him and has made several unwanted physical advances on separate occasions.
The #MeToo allegations against Gupta also mentioned that he is the guest curator for Serendipity. Gupta had come on-board for the third edition of Serendipity to curate a highlight event, ‘My Colour on Your Plate’, which would have marked his first curatorial venture. ‘My Colour on Your Plate’ is set to engage 11 artists from across the world, including Anita Dube (the current curator of Kochi Muziris Biennale), Paul McCarthy (US), and journalist Mayank Austen Soofi.
In a message to Mint on Friday, December 14, Gupta denied all allegations. “I deny the anonymous allegations made on the Instagram account @herdsceneand in their entirety; I have never behaved in an inappropriate manner with any individual who worked with me and several of my former assistants can attest to this. These allegations are entirely false and fabricated,” Gupta said. Serendipity released an internal statement for curators and key artists on the matter on Friday. The statement says Gupta is stepping down from his position and will not be present at the event. “In light of recent comments, Subodh Gupta has issued a statement denying the said comments. He has decided to step back and will not be present at the festival, so as not to detract from the collaborative efforts of over 90 projects at the Serendipity Arts Festival this year. Serendipity Arts Foundation supports the #metoo movement and is committed to the safety of all in the workplace and the welfare of the extended Festival community and its participants,” the statement said.
Concern over safety of women
The allegations against Gupta have raised serious concerns about the safety of women working in the arts, especially those in roles such as studio assistants and volunteers.
‘Herd and Scene’ also mentions that “many people say to be ‘careful’ around him”. Since 2008, there have been about eight female assistants who have worked with him, according to people close to the matter. Gupta’s studio is among the largest in India, with a large team working on projects at any given point.
New Delhi-based Gupta has often been compared to Damien Hirst and is most identified with his gigantic sculptures made of Indian utensils, many of which have sold for over ₹1 crore. He has been shown in festivals and biennales across the world, including Venice Biennale and Kochi-Muziris Biennale.
Peter Nagy, the co-director of Delhi-based art gallery Nature Morte, which represents Gupta in India, said the gallery has a zero tolerance policy against any types of harassment.
“Nature Morte is aware of the statements that have been made concerning Subodh Gupta. Nature Morte does not condone and has a zero tolerance policy against any types of harassment or discrimination, particularly sexual discrimination,” Nagy said.
It is not clear yet whether Nature Morte will continue to be associated with Gupta.
A similar statement was made by gallery Hauser & Wirth which represents Gupta internationally.
In a statement to ARTnews, the gallery said that it has been made aware of the statement regarding Gutpa’s behaviour towards women and that the gallery maintains “a zero-tolerance policy toward all forms of harassment and discrimination, including sexual harassment”.
Gupta has also worked with Galleria Continua, Italy.
In response to queries, Galleria Continua in a statement said, “Galleria Continua does not condone any form of harassment or discrimination. We have been alerted to the recent allegations towards Subodh Gupta, which we are handling as a matter of upmost importance.”
Mumbai-based writer and art critic Skye Arundhati Thomas said, “There is powerful infrastructure that enables the abusive behaviour of many men. In the case of Subodh Gupta, I hope the institutions that support him recognize that they are complicit in perpetuating unsafe environments, and immediately begin to work on building safer spaces or risk losing the participation of a growing group of disquieted people.”