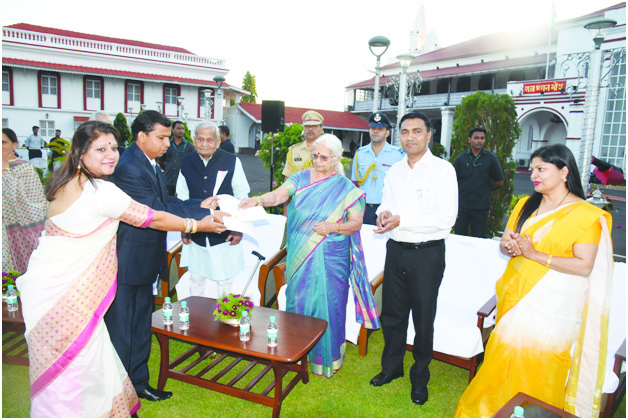 SPARKLING CLEAN: Governor of Goa Mridula Sinha hosted a reception at the Raj Bhavan on the occasion of the 57th Goa Liberation Day. Dr Sinha who is nominee for Swacch Bharat Abhiyan announced awards for two clean cities and two villages in the state. Bicholim and Cuncolim were selected as the best cities from north and south Goa respectively. Pilern-Marra village and Chicalim village also won. Representatives received cheques of `50,000 each and certificates from the Governor. In pic Chairperson Cuncolim Municipal Council Mrs Lavina Mascarenhas and Chief Officer Shri Shankar Gaonkar receiving the awards for Cuncolim

THIS is with reference to recent media reports wherein GOACAN’S Roland Martins asked for a counter of the Goa Printing Press be set up immediately at the Matanhy Saldanha Administrative Complex in Margao. The would be a great blessing. The GPP sales counter at Communidade building no longer functions and citizens travel to Panaji headquarters to buy calendars or other government publications. Martins appeal should be fulfilled as soon as possible for it will help whole south Goa. Directorate of Printing Press should also update with the times! Please start an online sales facility whereby home delivery of items is facilitated after online booking. Orders costing above `500 may be delivered free, while lesser priced orders delivered at delivery cost. All this would be a great boon, especially for senior citizens like yours truly.
— Vikas Kamat, Aquem, Margao

SHAME ON GOA MEDIA, GUJ!
IT has been months since the Chief Minister of Goa Manohar Parrikar addressed a press conference or interacted with the people of Goa at a public function. Since February this year his performance as CM has been behind a big iron curtain – except a few appearances such as during Assembly session, asthi kalash arrival of late AB Vajpayee and his journey to AIIMs from a private hospital in north Goa. Ever since Parrikar’s arrival in Goa on Oct 14 he has not been seen in public and his actual medical condition remains under wraps.
Only two photos of a purported Cabinet meeting with Speaker Dr Pramod Sawant were released in which Parrikar was visibly frail and tired. The media talks big of several “options” such as a possible new CM with Parrikar resigning, shedding some portfolios, etc. Several names were discussed as his successors indicating that the CM would resign in public interest and ensure his speedy recuperation.
It is now not hidden that the CM is battling cancer and not a mild flu or common cold. Is Parrikar really competent to run the government as chief minister? According to certain media he is walking in his house. Some reports say he uses wheelchair and is being tube fed via his nose…Vinay Tendulkar lied that Parrikar would return to office during Diwali. Cabinet Minister Vijay Sardesai claims CM watches TV shows.
What prevents the head of the government of Goa from meeting Opposition MLAs or media? Goa media is spineless, akin to what happened during the infamous Emergency when those asked to bend preferred to crawl. Do journalists under the banner of Goa Union of Journalists and Editor’s Guild have guts to demand an audience with the CM? Has any editor of a Goan daily been permitted inside the private residence of Manohar Parrikar?
I can understand the silence of bureaucrats since they are bound by oath of secrecy not to talk. What ails the Goan media though? Why this deafening silence? Journalist Harish Volvoikar was detained by the Goa police in February 2018 for alleged fake news on Parrikar’s health. Now it is confirmed that Parrikar is indeed suffering from cancer! Does Volvoikar not deserve an apology?
Let me see if anyone publishes this letter!
— Tukaram Pandurang Naik, Merces

FREELOADING POLITICIANS & KIN!
WITH X’mas 2018 and New Year here many senior government officers and some politicians have reportedly lined up visiting family and friends to have a ball in Goa, land of feni, formalin-laced fish and frolic. Such a criminal burden on taxpayers is unacceptable. Let officials and politicians make merry with their visiting guests strictly at their own expense. Whether it’s asking casinos to provide free entertainment or complimentary rooms in hotels or sponsored taxis to ferry family and friends around — all this is absolutely unacceptable and should be vehemently exposed.
Over this festive season let us be vigilant and ensure that merry making at public expense is not allowed. Such extravaganzas cannot directly or even remotely indirectly be at the cost of Goa’s State exchequer which is already in utter dire straits. This is abuse of power, nothing less.
— Aires Rodrigues, Ribandar

SHANTARAM NAIK GARDEN
THE Municipal garden known as Salvador Souza Rose Garden (next to Govinda building on Gen Bernardo Guedes road) in Panaji should be re-named Shantaram Naik Garden as it is conserved with funds at disposal of the two times Rajya Sabha MP and one time Lok Sabha MP. Shantaram Naik’s immense contribution to the wellbeing of citizens of our garden city should be cherished by raising a memorial and statue in this garden. Jai Hind!
— Sanjay Sarmalkar, Rajan Savllo Ghate, Sadanand Vaingankar, Girish Chodankar, Edgar, Gaspar, Muktmala, Shirodkar, Fondevekar, Pratibha, Borkar

VIJAI, BEHAVE LIKE A NIZ GOENKAR!
Vijai Sardessai’s call for liberation from “pseudo-activism and negativity” is supposedly that of a minister whose grip on power has become lax due to corruption and favouring of the real estate lobby. If Vijai thinks he is bringing about real development, why is he allowing conversion of paddy fields, orchard land and salt pans into settlement arrears? Why is he not vouching for the many exhausted mines in the state to be allotted to the real estate sharks for development and transform them into inhabitable areas instead of converting sparse lands which can be used for rice cultivation, fruit orchards and traditional salt pans for natural common salt (which is better than the iodized salt that we get in the market). Is he implementing the Goem, Goenkar and Goenkarponn phrase that he coined and does he think that his regional party will find favour with the common people after his political betrayal and the greed for power he displayed, instead of working diligently for the interest of the Goans who are against the selling of Goan lands to the real estate mafia?
Vijai, please don’t betray Goans and their well-being and patience; it will cost you dearly as people are wide awake to your betrayal of the things dear to them. Please don’t sell Goan land to those who may be lining your pockets, your deception and greed stand exposed in Goa as a TCP minister. Positivity means conversion of ghost exhausted mines by levelling them into flourishing rural township areas, and negativity is a conversion of paddy fields, orchard lands, and salt pans into settlement zones.
— Stephen Dias, Dona Paula