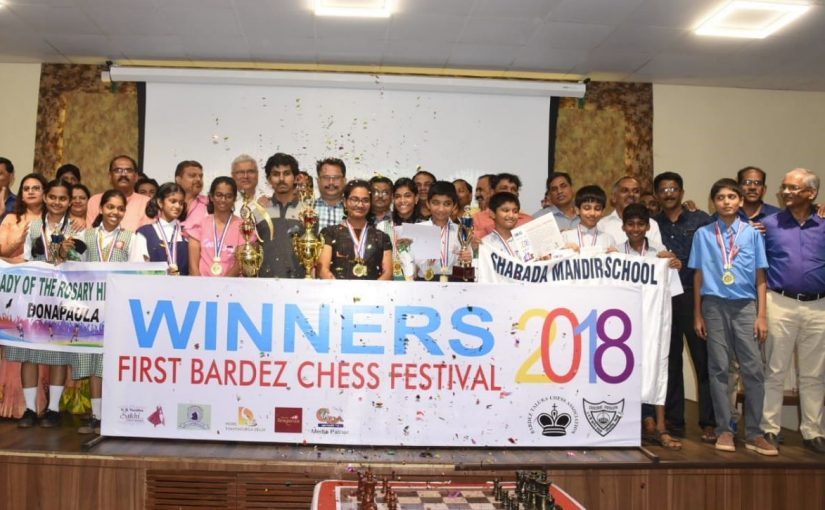 CHESS FOR ALL: Minister for Power Nilesh Cabral attended the closing ceremony of the first Bardez Chess Festival 2018 organised jointly by Bardez Taluka Chess Association and Saraswat Vidhyalay’s Sridora Caculo College under the aegis of the Goa Chess Association which concluded on December 26, 2018, at Corlim, Mapusa. Along with a School Team Championship, participants enjoyed various events such as Rapid Chess and Blitz Chess

The IGP-Goa Police, has applauded his men on the 86% crime detection rate! He further complimented them on their detection of drug dealers! We do not know who did the compilation but we do know that drugs are still easily available outside the GMC!
Importantly, has the high detection rate lowered the crime rate? The very day of his announcement saw another dastardly crime at Canacona: the second such crime in Goa where the victim and the accused were unknown to each other. This is chilling, that a woman never knows who can suddenly waylay her! Detection alone is no comfort: we want no such crimes to happen. Another worry is that the accused has been happily roaming from North Goa to South Goa in the wee hours of the morning, committing all manners of crime along the way! The 86% detection rate did not bother him! Where are the highway patrols? The bench mark for crime in Goa has to be Goa’s past records and not today’s record across India.
The IGP must let us know whether he can ensure nil rapes in Goa of the kind mentioned above. If not, then he needs to raise his voice at the proposed Master Tourism Plan which wants to make tourists, and with them people like the accused, proliferate right in the inner belly of Goa.
— R Fernandes, Margao

STOP HOT-MIXING NOW!
Hearty congratulations to vehicle users, on the posh road being made available to them by the government headed by the respectable technocrat, who has the know-how that the definition of an urban road is dangerously incomplete without footpaths.
The administration should immediately attend to the needs of the elderly (upheld when needed as ‘old is gold’) who are scared to take to the roads in apprehension of the government not being bothered to provide the most essential component of every urban road — footpaths. Could it be that they do not wish the elders to maintain fitness by their mandatory walks, twice a day?
We the tax-payers demand the hot-mixing routine of Panaji should be stopped/put on hold, until they plan and execute the valued provision of footpaths on all the roads of our would-be-smart city.
Just hot-mixing for show-off, facilitates only monster-riders and daredevil drivers, and threatens the movement of pedestrians, especially the elderly.
If the government dares command that elders be kept off the roads to achieve, “sabka sath sabka vikas”, then first let them say so openly through a notification, and then and only then proceed with their grand agenda to please the creamy layer of this ‘democratic’ society.
If you ignore us, we too can ignore you, dear rulers!
— K Mohan Rao, Caranzalem

IS THE BJP REALLY SECULAR OR COMMUNAL?
The BJP is a known frontal political wing of the fascist RSS fighting to turn this secular country into a Taliban type “Hindu-Rashtra and to turn minorities into second-, if not third-class citizens of India.
Otherwise, why does this party always unleash/promote known communal ‘goonda’ leaders in some states who are more interested in protecting cows but not human beings, and give full backing for such leaders to carry forward the above mentioned mission or to issue the most irresponsible statements against the minorities so very often in the name of pseudo-nationalism to divide different communities of India on religious lines?
Why does this party forever talk only of constructing Hindu temples and not religious structures like churches or mosques of other communities in different parts of India? Why do the leaders of this party tell only the minorities where to pray and where not to pray or talk of imposing their personal dress-code or eating habits over the minorities to play cow politics for their own political survival? Does this country belongs to only one community of India?
I think that if the BJP is really not a communal party (as it always claims to be) then it needs to come clean over a variety of issues because looking at the actions/attitude of most of its top leaders, it looks as if it strictly represents only one majority Hindu community of India and no other communities. Yes, the BJP leaders should tell us whether their party is really secular or communal because they always accuse other political parties like the Congress party (which historically believes in giving equal rights to all) of indulging in minority-appeasement.
Now, aren’t the BJP leaders themselves mischievously not indulging in majority-appeasement for their own political survival by still not allowing women in some prominent Hindu temples despite Supreme Court orders and also by giving full protection to road-side uncivilised right-wing goons who go about lynching innocent people in broad day-light in the name of cow-protection?
Over to the BJP leaders…
— Jerry Fernandes, Saligao

SAVE DONA PAULA RESIDENTS!
We, the residents of Dona Paula near the National Institute of Oceanography, strongly object to the construction activities going on within a radius of 100 meters of the NIO circle. One is a multi storey building coming up on a little lane. This is going to cause shortage of water, parking hassles and misery to the old timers along the road.
The other is just at the start of the road to the Our Lady of the Rosary school, (known as Green Rosary), right at the slope. Land which earlier was a temporary bus shelter for tourists vehicles is being filled up. Supposedly the construction is being supported by the Goa Tourism Development Corporation (GTDC) and they are planning to have a garden, toilet and a restaurant. The area is about 2,000 sq mtrs approximately and the same is likely to be expanded by demolition a heritage structure adjacent to this project. The road between the NIO residential colony and the planned structure (about 12.5 mtrs) will not be enough to take the load of parking for the construction which is being proposed by the builder’s lobby of a five-star hotel in the vicinity.
Sometimes back, the headmistress of the higher secondary of the school fell thrice due to the bad condition of the road. Similar accidents have taken place many times in the recent past at the slope due to the narrowing of this stretch of the road. In fact this road has to be widened so as to be able to cater to traffic density in the area. Several representations have been sent to both the then MLA of Panaji as well as Taleigao MLA to widen the road but no action in the matter has been taken. It remains a death-trap. And now with the recent proposed developments traffic congestion will increase 10-fold.
Some scientists from NIO have suggested that this bus shelter/proposed structure be shifted near the Children’s Park at Caranzalem in order to ease the congestion.
— Stephen Dias, Dona Paula