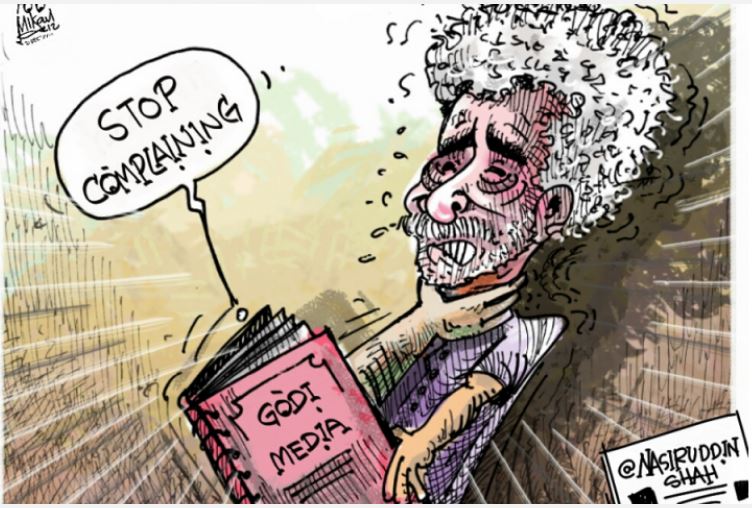 The organisers of the Ajmer Literature Festival had to cancel Bollywood actor Naseeruddin Shah’s keynote address on Friday, December 21, following a protest by the Bharatiya Janata Party’s youth wing.
The right-wing group was protesting against recent remarks made by the veteran actor on the rise in incidents of mob lynching across the country.
“There is complete impunity for those who take the law into their own hands. The poison has already spread and it is difficult to put this jinn back into the bottle,” Shah had said during an interview with Karwan-e-Mohabbat.
On December 3, mob violence broke out in Uttar Pradesh’s Bulandshahr over an incident of alleged cow slaughter in the Mahaw village of the district. The violence led to the death of two men, including police inspector Subodh Kumar Singh, who was killed by right-wing activists.
Expressing concern, Shah said that “the death of a cow had more significance than that of a police officer.”
The actor added, “I feel anxious for my children because tomorrow if a mob surrounds them and asks ‘are you a Hindu or a Muslim’, they will have no answer.”
Shah, who is Muslim, is married to the well-known stage and cinema actor, Ratna Pathak, a Hindu.
In a playbook reminiscent of right-wing outrage over remarks made by the actor Aamir Khan in 2015 decrying the government’s failure to act against violence,  Shah’s statement remarks triggered a sharp reaction from many BJP leaders and their supporters. Some took to social media to register their protest and likened Shah to a character he had played in the 1999 movie, “Sarfarosh”.
The 68-year-old actor was supposed to deliver the keynote address at the fifth edition of the three-day literature festival in Ajmer.
Before the event, many right-wing activists protested outside the venue. One of the protesters also hurled black ink on the poster of Shah.
Raas Bihari Gaur, coordinator of the festival, told PTI, “Shah was scheduled to inaugurate the festival but he did not come because of the protest by some locals over his comments.”
Shah was also scheduled to launch his book in the opening session, which was also called off due to the protests.
Earlier in the day, Shah visited his alma mater, St Anselm’s Senior Secondary School, where he was asked by reporters about the backlash he is receiving on social media following his remarks.
He said that he made the comments as a concerned Indian citizen. “What did I say this time that I am being termed as a traitor?” Shah told reporters.
Naseeruddin Shah: What I said earlier was as a worried Indian. What did I say this time that I am being termed as a traitor? I am expressing concerns about the country I love, the country that is my home. How is that a crime?
“I have to bear criticism. If they have the right to criticise, then I also have the same right. I am expressing concerns about the country I love, the country that is my home. How is that a crime?” he asked.
“We cancelled the session after the vandalism. We were concerned about our guest’s safety,” the festival organising committee member Somratan Arya told Hindustan Times.
Though police has confirmed the act of vandalism, the organisers have not yet lodged an FIR.
“Go to Pakistan”
Meanwhile, the president of the Uttar Pradesh Navnirman Sena claimed to have booked Shah a one-way ticket to travel to Karachi on August 14, Pakistan’s independence day. “If Naseeruddin Shah is scared in India, he should not delay leaving for Pakistan,” he told the Times of India. “If Shah doesn’t want to go to Pakistan, he should read Hanuman Chalisa, because after all BJP MLC Bukkal Nawab has said that Hanuman is Muslim,” he added.

It was hardly surprising that right wingers would get outraged about Naseeruddin Shah’s recent comments about growing instances of mob violence and how the death of a cow was given more importance than the killing of a policeman.
It is not as if Shah has made any secret of his views on anything. He is known for speaking out, sparing not even his own industry and its haloed names. Early on, in the 1980s, Shah, then a star in the parallel cinema circuit, had rubbished arthouse films as mediocre and even fraudulent. It didn’t win him any friends. In interviews, he candidly talked about how Rajesh Khanna was no actor and dismissed Amitabh Bachchan’s films. Recently, he called Virat Kohli the ‘worst behaved player in the world’ a point made by several others.
He follows political developments, is well read and is known to have well considered views on current events. He is secular to the core. He has not imposed any religion on his children, leaving them to work out their own path.
So he was being true to form. And, in keeping with their intolerance of such views, right-wing Hindutva warriors did what they do best – object to his presence at a literary fest in Ajmer. The Ashok Gehlot government in Rajasthan was sluggish in its response, giving us a glimpse into what the future may hold. The event was shifted to a less public function in Pushkar, where he released a book and sent a video message to his fans.
With this, Shah has trumped the Hindutva elements. He has not backtracked, not made any bogus statements of the “I

apologise for offending anyone” variety and not reached out to influential elements to sue for peace. Nor has he shut up. This sets him apart from his industry compatriots, where the norm is to rush to a powerful person, issue a grovelling apology and then swear never to speak out again. Some, like Bachchan, have developed the fine art of saying nothing; it is as if he exists in a parallel universe where he remains untouched by what is happening around him. Others, like Aamir Khan – otherwise a no less sensitive person – take a vow of silence after a backlash. Still others, like Karan Johar, give in at the first sign of threats and abjectly apologise.
Naseeruddin Shah’s outspokenness is not just refreshing but welcome. He is a respected actor and public figure. He has been consistent about what he stands for. His views matter. It is his very heft that gets the right-wing, Hindutva lot and their masters angry. They can’t ignore him and they know that his words carry weight in the public arena. He scares them. That is why they went after him.
Which is why, more than ever, we need more Naseeruddin Shahs in this country.
(Extracted from Sidharth Bhatia’s article in the Wire)

Anupam Kher — fellow-actor and vocal BJP supporter — lashed out at Shah, wondering how much more freedom he expected to have in a country where one could even “abuse” the army.
“There’s so much freedom in the country that you can abuse the army, badmouth the air chief and pelt stones at soldiers. How much more freedom do you need in a country? He said what he felt like, that doesn’t mean it’s the truth,” Mr Kher told reporters today. He was referring to the opposition questioning the authenticity of the cross-border surgical strikes; Congress leader Veerappa Moily calling the Air Force chief a “liar” for appreciating the Rafale verdict; and soliders being targeted by stone-throwers in Kashmir.
The two actors had their differences on earlier occasions too. In 2016, the two actors clashed on the issue of Kashmiri Pandits. Years later, Mr Shah questioned his contemporary’s long absences from the Film and Television Institute of India despite being its chairman.