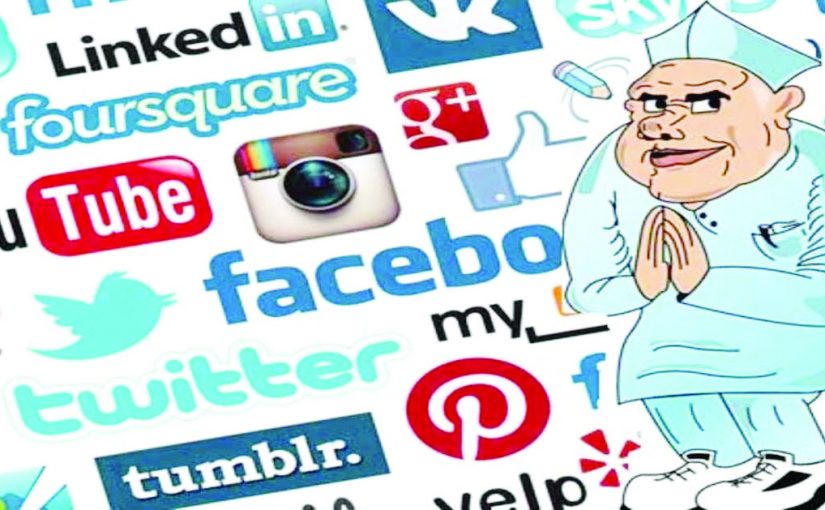 SOCIAL MEDIA: The 2014 general elections in India was revolutionary. Social media was the new battleground. The success of the BJP’s online campaign in the 2014 Lok Sabha election was phenomenal and other parties quickly realised they had to catch up or lose out

Every five years, elections are fought amid new ideas that were not central to the previous polls. This time, the additions include nationalism, social media as everyone’s tool for connecting with voters, MeToo, and a repositioning of parties in the secular-communal debate

Since the 2014 Lok Sabha elections, a number of issues have newly grabbed public attention. Tolerance, political accommodation, limits of freedom in academic institutions, privacy as a right, equality (homosexuality, Sabarimala entry), gender rights (#MeToo), autonomy and independence of institutions (like the Reserve Bank, judiciary, media, CBI etc), ideas that had not been the central theme of previous elections, are all part of the current discourse. Ahead of the once-in-five-years national elections, a look at some of the issues that did not dominate in 2014 but will be in focus in 2019:

Though the word secular was included in the Preamble of the Constitution through the 42nd Constitution Amendment during the Emergency in 1976, it was decades later that politics around secularism gained momentum, when the BJP decided to lend its support to the RSS/VHP-sponsored Ram temple movement.
Since then, the BJP has ridden the Hindutva image to widen its footprint, culminating in the absolute majority that it won in 2014. That victory appears to have influenced the politics of the secular forces today, in particular the Congress’s approach towards minorities. While regional parties have chosen not to engage in the secular-communal debate in public, the Congress seems to have begun a conscious effort to shed its long-standing image of being a pro-Muslim party.
So, when the incumbent BJP has already shown that it can come to power without expressly wooing minorities, and when it has continued to show little inclination to woo them, the Opposition does not want to be seen as too close to minority causes either. This has led to minority-centric politics having become almost invisible on either side.
The 2019 elections will be a test case for the line taken by parties that have traditionally been identified as secular. Will they continue to keep minority issues at arm’s length? Or will they shed their new-found inhibition about championing minority causes, at least in public?

If the “secular/communal” binary used to dictate the justification or criticism of most political decisions prior to 2014, the

“national/anti-national” binary has emerged as its replacement since then. Nationalistic arguments have increasingly become the response to voices of dissent and criticism against the government. Apart from coarsening the public discourse, this has led to a growing impression that any dissenters or opponents would be branded anti-national.
While the champions of nationalistic jingoism have claimed that the idea is inclusive, its detractors have claimed that it is exclusivist and overused. The student protests on the JNU campus, the political positions on surgical strikes, the arrest of activists in connection with the Bhima-Koregaon violence, the NRC exercise in Assam, and the allegations of a scam in the Rafale deal are among the prominent examples of this binary reflecting in the national conversation.
The 2019 elections could also test the utility of nationalism for mobilising votes. The last time nationalistic fervour came into play was during the 1999 Lok Sabha elections, held after the Kargil war. The BJP returned to power as the single largest party with the same number of seats as it had won in 1998, before Kargil.

The use of social media for political communication was pioneered to a large extent by Narendra Modi, then as PM candidate, in the run-up to the 2014 elections. Twitter, in particular, was his main tool for constant communication with the electorate, leaving the competition way behind in the campaign. Modi’s success in the election led to the mainstreaming of social media as parties across the board began to use it as their tool for political communication.
Since then, the landscape of the medium has evolved rapidly. Competitively priced smartphones and declining data costs have led to growing smartphone usage and enhanced data consumption in India since 2014. A more widespread mobile Internet has fed two unique usage patterns in India — WhatsApp messaging services and video consumption. The 2019 elections will be far more data-consuming than the last, and will set the tone for digital technology-enabled campaigning. Mobile Internet provides for a targeted, engaging medium of communication that can spread wider and faster than all other modes of campaigning used since Independence.
Unlike 2014, however, when Modi had the first mover’s advantage, the incumbent and Opposition parties are by now equally alive to the challenges and opportunities thrown up by this new medium. The contest is therefore likely to be more evenly balanced. The 2019 elections will be an interesting study in a digital-enabled campaign in a diverse country.

India’s youth demographic and its desire to disrupt old approaches with out-of-the-box ideas are widely acknowledged to have added to Modi’s appeal in 2014. The same young and impatient electorate may have realised that changes happen over time and not in five years. 2019 may provide fresh insight into the electoral mindset of the digitally empowered young demographic. Newly emerged young faces like Hardik Patel, Kanhaiya Kumar and Chandrashekhar Azad Ravan have captured the imagination of some of those seeking the push the envelope.
At a more tangible level, relatively young leaders across parties — Rahul Gandhi, Akhilesh Yadav, Tejashwi Yadav, Chirag Paswan, Omar Abdullah, Jaganmohan Reddy, Dushyant Chautala; coupled with new leadership in the form of H D Kumaraswamy and M K Stalin — will be negotiating the politics of government formation at the Centre. In political negotiations at the national level, 2019 will contrast 1996, 1998 and 2004 when it was the elders of these leaders who plotted the moves. How far these new-generation leaders have come of age will be on full display.

The resignation of minister M J Akbar in response to the demands of a nascent feminist movement, played out in public, was a milestone in national politics. This makes 2018 a significant marker for #MeToo, spearheaded by working women and heavily anchored in social media.
Widening opportunities in education, economic opportunities and increasing awareness because of the spread of mobile Internet have expanded the scope of women’s quest for equality in choices and decision making.
The #MeToo campaign, organised through mobile Internet tools that bypass the established political organisations or advocacy groups and, in some cases, the mainstream media too, has demonstrated the effectiveness of these tools for future campaigns. 2019 will provide an opportunity to see if this widens to different walks of life and embraces more sections of women.

Despite their localised influence and numerical limitations, the communists have had a relatively significant say in policy and politics of the country for several decades. They have played crucial roles in shaping governments and policies at the Centre and provided robust arguments for a defined-benefits model of welfarism.
Electoral setbacks since 2014 — a second consecutive defeat in West Bengal in 2016 and a defeat at the hands of the BJP in Tripura (2018) — appear to have taken the electoral heft out of the communists. Faced with a cultural-nationalist government that frequently targets them, the communists will look at 2019 as a fresh opportunity to retrieve lost ground.
The communists have been able to grab national attention with their mass movements on farm and tribal issues in 2018, and they have also tried to join ranks with Dalit and oppressed classes to regain their appeal since 2014.

Issues relating to identity and inequity have always been part of the socio-political discourse.
Agrarian inequity seems to have emerged an issue for which guidance could come from the electorate in 2019.
The incumbent is highlighting subdued inflation clubbed with its welfare measures — wider access to houses, clean fuel (LPG), power, toilets, bank accounts etc — as evidence that it is correcting the inequities.
The challengers are highlighting the plight of producers (largely farmers) and traders on account of disruptions — slump in commodity prices, demonetisation and GST — that are leading to cascading distress.
2019 will show to which group — welfare beneficiaries or distressed economic agents — will dictate the direction of politics for the next few years.
While this economically defined tug-of-war is seeking a resolution, a decades-old settlement to a socially defined equation seems to be fraying. Having walked together for almost a generation, the forces of Mandal (1990) and Markets (1991 reforms) seem to be getting impatient with each other.
The revolt of dominant communities — Jats (Haryana, UP), Patidars (Gujarat), Marathas (Maharashtra) — has demanded new social contracts from political forces. The Dalits have been assertive about safeguarding their interests amid legal and political challenges, leading to a backlash from other communities. 2019 could well shape the future direction of these anxieties around economic inequity and social identities.

The last time India had to majorly refashion its global outlook was after the collapse of Soviet Union, and with it the end of the Cold War, in 1991. However, the standoff between the US and China is threatening to snowball into a Cold War-like situation that may require India to reposition itself once again.
With US President Donald Trump showing no signs of backing off from his 2016 poll rhetoric, and China under Xi Jinping showing very little inclination to concede to any bullying tactics, the new situation may require clever calibration. More so, when Russia has joined China in staring down the United States and its partners on major global issues. Any flare-up in the US-China relationship will test India and its preference for neutrality.
Meanwhile, the new government in Pakistan and its stance towards India will also be something to watch out for.