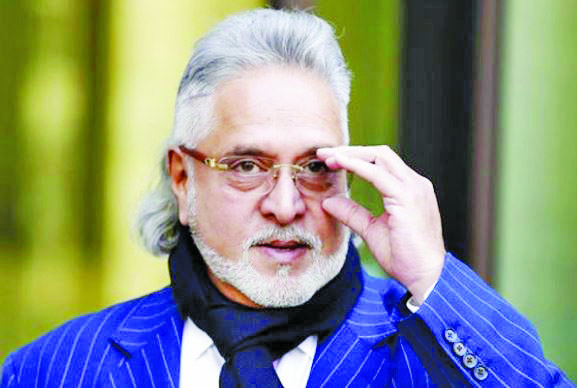 TOUGH: In a punchy summary statement after announcing her judgement, Chief Magistrate Arbuthnot described Mallya as a “glamorous, flashy, famous, bejewelled, bodyguarded, ostensibly billionaire playboy” who may have “charmed and cajoled” bankers into “losing their common sense and persuading them to put their own rules and regulations to one side.”

Embattled liquor tycoon Vijay Mallya’s legal troubles continue to mount as he is set to face bankruptcy proceedings in the UK High Court in 2019, brought by a consortium of Indian banks in their attempt to recoup unpaid debt worth nearly 1.145 billion pounds.
TLT LLP, the UK-based law firm which had won a landmark case for the 13 banks led by State Bank of India (SBI) in 2018, confirmed that their bankruptcy petition against the 62-year-old businessman has been transferred to the insolvency list in London’s High Court of Justice for a hearing in the first half of 2019.
“We can confirm that we presented a bankruptcy petition against Dr Mallya on behalf of the banks on 11 September 2018,” said Paul Gair, partner at TLT.
“This was issued in Dr Mallya’s local court, Northampton County Court, and has now been transferred to the insolvency list in the High Court of Justice in London for the hearing. The hearing is expected to take place in the Spring,” he said.
In a ruling in May, a UK High Court judge had refused to overturn a worldwide order freezing Mallya’s assets and upheld an Indian court’s ruling that the consortium of 13 Indian banks were entitled to recover funds amounting to nearly 1.145 billion pounds.
TLT LLP has been representing the banks in their efforts to recover their dues as part of the worldwide freezing order, with the bankruptcy petition aimed at seizing his assets to recover dues.
Besides SBI, the 13 Indian banks include Bank of Baroda, Corporation bank, Federal Bank Ltd, IDBI Bank, Indian Overseas Bank, Jammu & Kashmir Bank, Punjab & Sind Bank, Punjab National Bank, State Bank of Mysore, UCO Bank, United Bank of India and JM Financial Asset Reconstruction Co Pvt Ltd.
They have secured follow-on High Court orders to recover some of the funds owed to them as a result of unpaid loans by Mallya’s now-defunct Kingfisher Airlines.
Mallya, meanwhile, remains on bail after his extradition was recently ordered by Westminster Magistrates’ Court in London, an order which now awaits a sign-off by UK home secretary Sajid Javid.
Chief Magistrate, Judge Emma Arbuthnot, had ruled last week that Mallya does have a case to answer in the Indian courts over substantial “misrepresentations” of his financial dealings, in a boost to India’s efforts to bring back the businessman wanted for alleged bank fraud and money laundering charges amounting to an estimated `90 billion.
“There is clear evidence of dispersal and misapplication of the loan funds and I find a prima facie case the Dr Mallya was involved in a conspiracy to launder money,” the ruling noted.
Mallya has indicated that he plans to appeal the verdict in the High Court.
“My legal team will review the judgment in detail, consider various options and then I will decide going forward. There is a process ahead,” he told reporters.
He will have 14 days to file an appeal once Javid has made his decision on the extradition order, which rarely goes against the Chief Magistrate’s conclusion.
In separate legal proceedings, Mallya is also set for a trial in May next year to prevent his posh London home, overlooking Regent’s Park, from foreclosure by Swiss Bank UBS.

No one spells corporate vicissitude like Vijay Mallya. Once upon a time he ran India’s largest spirits company, breaking new ground with an airline that served food that customers raved about and easily being the most flamboyant and stylish Indian tycoon ever. Now, he faces possible deportation from the UK, where he fled after leaving a trail of unpaid debts, his airline closed and his liquor firms sold.
Mallya, whose business was driven by the success of Kingfisher Beer and other alcohol brands, made his presence felt across sporting arenas like cricket with the ownership of Royal Challengers Bangalore, an IPL cricket team, Force India, a Formula 1 Grand Prix racing team, and dozens of champion thoroughbred racing horses.
The airlines company, which was launched in 2005, proved to be his undoing, as its business model floundered in 2008, when a global recession and soaring fuel prices brought it to a grinding halt. Kingfisher Airlines went from being a disruptive airline to turning insolvent in 2012, with planes being seized and thousands of employees, and creditors being left high and dry. The last year saw Mallya battling extradition and government charges of fraud from London.
Mallya, who is accused of owing banks `90 billion, has publicly offered to make good on his debts and says in public announcements that he has been doing so since 2016. Regardless, after months of legal back and forth, the Westminster Magistrates courts in the UK ruled in favour of Mallya’s deportation to India. While counter-appeals are likely, the journey is nearing an end, and there’s a strong possibility that Mallya will be brought back to India.

A UK High Enforcement Officer is set to sell a fleet of Vijay Mallya’s cars in the UK as part of efforts to recover loan repayment dues owed by the beleaguered liquor baron to a consortium of 13 Indian banks, the banks’ legal representative confirmed on Friday.
The cars listed in the order include a range of luxury vehicles, some with personalised registration numbers a 2016 Mini Countryman (AD16 1YX); a 2012 Maybach 62 (VJM1); a 2006 Ferrari F430 Spider (B055 VJM); a 2014 Range Rover Autobiography Supercharged (F1 VJM); a Ferrari F512M (M811 VGR); and a Porsche Cayenne (OO07 VJM).
In an enforcement order dated October 11, Justice Sara Cockerill had granted an order for a High Court Enforcement Officer to sell the six cars “by private treaty at a price not less than 404,000 pounds plus VAT”.
A further cost of making the application, assessed at 1906.10 pounds, was also added to the overall debt amount.
The latest enforcement order follows a previous order by Justice Bryan on June 26, granting permission to the UK High Court Enforcement Officer to enter Mallya’s properties in Hertfordshire, near London. It permits the officer and his agents entry to Ladywalk and Bramble Lodge in Tewin, Welwyn, where Mallya is currently based.
The litigation in the Queen’s Bench Division of the commercial court in England’s High Court of Justice involves the State Bank of India, Bank of Baroda, Corporation bank, Federal Bank Ltd, IDBI Bank, Indian Overseas Bank, Jammu & Kashmir Bank, Punjab & Sind Bank, Punjab National Bank, State Bank of Mysore, UCO Bank, United Bank of India and JM Financial Asset Reconstruction Co Pvt Ltd as the applicants.
Mallya and related concerns Ladywalk LLP, Rose Capital Ventures Ltd and Orange India Holdings are listed as respondents.
A worldwide freezing order prevents Mallya from removing any assets from England and Wales up to that value or to in any way dispose of, deal with or diminish the value of his assets in or outside of this jurisdiction, up to the same value.