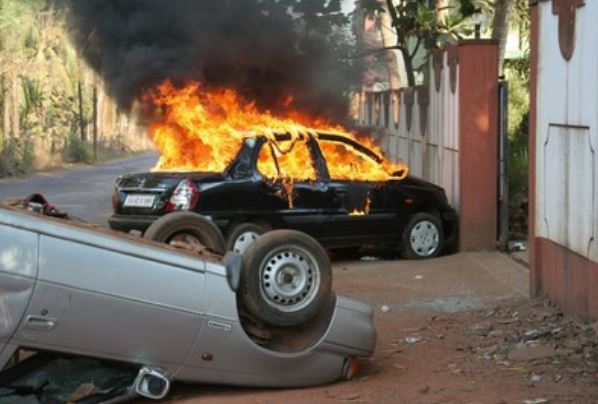 HARMONY: Goa has been a land of harmony with only a minor incident of conflict between the majority Hindu community and the minority Muslim community at Corchorem over the last five decades

With an increasing number of meetings being held in the State demanding the speedy construction of the Ram Mandir in place of the demolished Babri Masjid, Goa also seem to be getting communalised. Lord Ram has never been very popular in Goa. Unlike in the other parts in the country where Diwali is celebrated to mark the victorious return of Ram, in Goa it is celebrated as a tribute to Krishna for killing the demon Narkasur. In Goa it is Durga in the form of Shanta Durga who is most widely worshiped. It is only the RSS influence that is polarizing Goa on communal lines

Ever since the BJP came to power at the Center and a coalition government was formed in Goa by the minority BJP party with the support of MGP, Goa is getting more and more Hindutvised — in the sense that it is growing to be more like hard-core Hindutva BJP states like UP, MP and Rajasthan. Fortunately MP and Rajasthan have been liberated from Hindutva rule in the recent midterm elections.

The relief over the discovery that Narendra Modi is not invincible and can be defeated is offset for us in Goa by the growing polarization here.

Before the BJP came into power it would have been unthinkable for a leading local daily to carry the heading “Hindu groups demand swift ordinance for Ram Temple”. The meeting which was organized by the Viswa Hindu Parishad branch in Goa was led by leading Goan industrialist Ashok Chowgule. The Chowgules had supported Dayanand Bandodkar, then president of the MGP, when the MGP was pushing for merger of Goa with Maharashtra. They have always been closely associated with the saffron brigade. Not surprisingly the virtual acting CM Pramod Sawant, BJP Chief Vinay Tendulkar, Rajya Sabha MP Narendra Sawaikar and former MLAs Subash Shirodkar, and Rajendra Arlekar were present. All the swamis from the various mutts in Goa were there though there is no specific mention of the Sanatan Sanstha and Hindu Janajagruti Samiti (HJS).
The Sanatan Sanstha had moved its headquarters from Panvel to Goa when Manohar Parrikar became the BJP chief minister. Till the BJP came to power at the Centre the Sanatan Sanstha and HJS represented the main hardline Hindutva forces in Goa.

We are inclined to believe that the Sanatan moved to Goa as the Dhavalikar brothers are strong believers in the Sanatan Sanstha. The Sanatan Sanstha also has the support of the RSS and is part of the many frontal groups spawned by the BJP in the country.
Though Manohar Parrikar when he was in good health apposed the entry of the Ram Sene into Goa, the fundamental group from Karnataka (which vandalized churches and pubs in Mangalore), enjoys the support of the Dhavalikars.
It is believed that one of the Dhavalikar wives, who was a banker, looks after the finances of the Sanatan Sanstha. The Sanatan Sanstha has been organizing a mega rally every year, attended by lunatic fringe religious leaders from all over the country.
The SIT Mahatashtra believes that fundamentalist groups from Karnataka, Maharashtra and Goa had come together to form an assassination squad which allegedly killed rationalists Narayan Dabolkar, Kalburgi, Comrade Pansere and most recently Gauri Lankesh in Karnataka.
Among those who have received threats from these groups are writer and stage artist Girish Karnad and our own Sahitya Kala Academy winner Damodar Mauzo.
The Sanatan Sanstha and its associate the HJS have not specifically spoken about Ayodhya, which is not surprising considering that Ram is not a very widely worshiped God in Goa. Even Diwali — which in other parts of the country marks the return of Ram after killing Ravana and rescuing Seeta — in Goa is celebrated as the killing of the demon Narkasura by lord Krishna.
Goa is more like Bengal in that the majority of the Hindus worship the female mother goddess Durga. The most prominent temples in Goa, Mangueshi and Shantadurga, are devoted to the mother gods. A major difference is that unlike Bengal and other parts of the country, Durga in Goa is not the fierce warrior goddess but the peaceful Durga or Shanta Durga.

GOA DURING THE BABRI DEMOLOTITION

It is not as though Goan Hindus did not participate in the destruction of the Babri Masjid. At the height of the Babri Masjid agitation I recall going to Bicholim to check on rumours that bricks for the Ayodhya temple were being made there. The BJP had asked Hindus all over the country to contribute bricks with the holy image of OM for the construction of the Ayodhya temple.
It is even rumoured that Manohar Parrikar was among the group of Goans who visited Ayodhya and was presented when the Babri Masjid was destroyed by the kar sevaks. But unlike other parts of country, particularly Gujarat and Mumbai, there were no retaliatory riots or bombings in Goa.
This might partly be due to the fact that at the time of demolishing at the Babri Masjid, Muslims were not a significant part of Goan population. Ironically the only time in the history of Goa there has been a communal riot, is during the Congress regime when there was a minor clash between the Hindu and Catholic communities in Curchorem.
The inquiry commission indicted several senior BJP leaders including Parrikar for targeting vehicles, shops and houses of Muslim residents of Curchorem.
Even policemen were not spared, with our executive editor Jonquil Sudhir witnessing a police officer being thrashed by a hard-core RSS worker in Curchorem when she visited a site along with other journalists.
Goa was never part of the national mainstream, either under the Congress or the BJP. In fact, during the first elections held in Goa, the Congress did not get a single seat. The party which won the election and ruled Goa for 18 years was a Hindu majority party called the MGP which wanted Goa to be merged with Maharashtra.

Even when the BJP came to power Goa was not affected significantly by the Hindutva politics of the Central government in Delhi led by Modi.
When the BJP-ruled states banned the slaughter of cows and the storage and consumption of cattle it was not enforced in Goa. Admittedly there was some tension and the Goa Meat Complex was shut down for some time and Muslims and Catholics found it difficult to get beef.
There was no gau rakshak incident in Goa like the terrible lynching of a Muslim in UP merely on the suspicion he had stored beef in his fridge. There was no lynching of Dalits in Goa unlike in Gujarat where a group of them skinning buffalo were bashed up by gau rakshaks.
The meat trade in India is dominated by Muslims. India is the second largest exporter of beef. Cattle skin is used for leather, making India a major exporter of footwear. But it is only after the BJP came to power that fanatics and lunatics started targeting those who breed or consume or export any form of cattle. Ironically this has created a problem and the worst affected are farmers. We must stress that the majority affected were Hindu farmers who normally used to sell the cattle after their milk producing life was over, or they were too old to till the field, to Muslims. Between the Hindus and the Catholics they used to manage the cattle. After the gau rakshak madness, Hindu farmers are afraid of both killing cows or selling them to Muslims. They just leave the cattle to stray by themselves. This creates an even bigger problem as the cattle have been destroying their crops.
In a funny incident recently, Hindu farmers drove large groups of ‘holy’ cows into a school and locked them up. The police do not know whether to arrest the Hindus who locked up the cattle or the school authorities who allowed the cattle to displace children.

There have also been increasing claims of love jihad though there have been any number of inter-community marriages over the years — including marriages between Muslims and Catholic.
In any case, in Goa, the Hindu, Muslim and other community laws are not applicable, and the only marriage and inheritance law which is valid is the Uniform Civil Code. Religious marriages are not recognized and the only marriages which are legal are those which are registered before the Registrar of Marriages.
Similarly, there is no question of Christians seeking only the Pope’s permission for divorces, or Muslims resorting to the triple talaq, as divorces are also controlled by the civil court. A triple talaq is invalid in Goa and you can continue to claim 50% of the property and income of the husband even if you are Muslim until there is a legal divorce in court.
Part of the reason for Goa being different and strange (ajeeb), a word used by Jawaharlala Nehru, is the demographics. At the time of the Opinion Poll, Catholics accounted for more than 40% of the population in the state.
Before Liberation, because many Hindus left Goa and settled in Mangalore and Kerala, the Catholics were in majority. The proportion of Catholics steadily diminished because of immigration to Portugal after Liberation and subsequently to the Gulf in search of jobs. Despite the Hindus being in a majority they lost the Opinion Poll as some of them also opposed it.
Now however the demographics have changed, with Catholics constituting less than 25% of Goa’s population, with the proposition of Muslims going up to 15%. Recognizing that it is impossible to form the government without the support of the Catholics Parrikar even gave tickets to Catholic MLAs, who actually won.
Out of 14 seats the BJP has in the current assembly eight are held by Catholics. Manohar Parrikar was re-elected MLA of Panjim four times because of the support of the Catholics. It would therefore be suicide for the BJP to try to impose Hindutva to Goa.

DESPITE this there are three factors which worry me.
To win elections you need vote banks, money and muscle. The migrants who now constitute 50% or more population form a major vote bank.
The majority of the Hindu industrialists like the Chowgules and others are strong supporters of the BJP. With the arrival of Satish Dhond who is an expert in goondagiri the BJP can mobilize muscle power.
Goa has always believed in the principle of forget and forgive. There have been no demands for demolishing the Adil Shah palace which was built by Muslims. There have been no demands for demolishing the Bom Jesus Basilica though it was claimed that a temple was demolished to build it.
Though the Muslims demolished temples and churches, and the Portuguese demolished temples and mosques there is no animosity in Goa now.
All communities have existed in harmony for hundreds of years. There has been only one small communal clash since Liberation. We should not allow fanatics and lunatics to disturb the communal harmony in Goa. We must maintain the spirit of tolerance and integration which is what attracts the entire world to Goa.