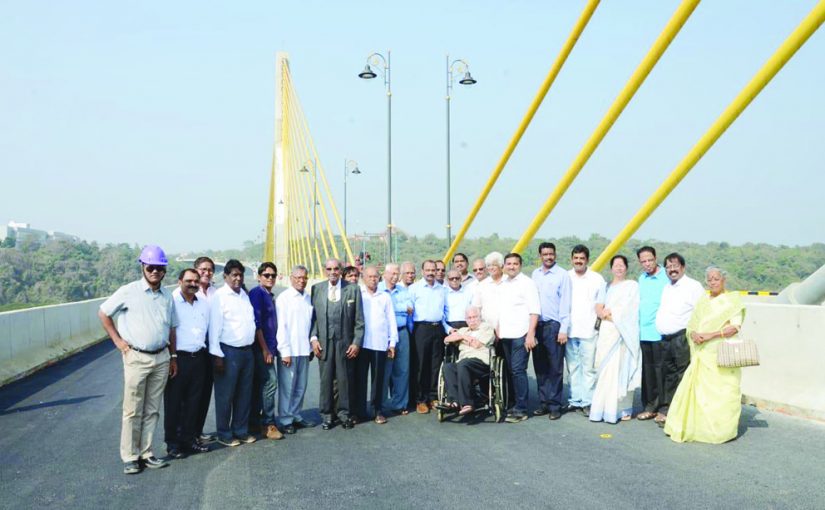 OH WHAT A GRAND PICTURE OF OUR GOAN LEGISLATORS PAST AND PRESENT, OLD AND NOT SO OLD: After celebrating their annual `Goa Legislators Day’ at the Secretariat at Porvorim, listening to one another’s woes about how stressful a politician’s life is today…the collection of former MLA and MPs (members of the Goa Legislators Forum all) sportingly trooped out to check out the third bridge coming up over the river Mandovi. A pity, CM Manohar Parrikar was not around to give them a guided tour on the art of building bridges…but we are sure the feedback will reach his ears! Recognise them? Beginning with former Power Minister Nirmala Sawant…so many men, so few women in Goan politics to say the least here!

THE government of Goa under the ruling BJP and the GMR must hang their heads in shame. It has spent an unbelievable `25 crore to build new 2BHK apartments for 14 rehabilitated Dhangar families at Casarvarnem in Pernem which are already showing signs of falling apart, a glaring indication that all is not well with the much-opposed Mopa airport project.

With roof plaster and walls disintegrating the villagers are being forced to go back to their cowsheds. It is a travesty that these newly constructed houses are already in decay and falling apart. So much for forcibly and surreptitiously imposing Mopa airport on poor peasants, more than half of whom have not accepted the meagre compensation extended to them.
The locals would do well to return their compensation and demand their land back so as to once for all stop the sinister designs of being coerced into accepting peanuts for their valuable agricultural land. Nature will never forgive the government and GMR for being in the process of felling over 54,000 trees — it is an ominous sign that Mopa airport itself is crumbling.
The substandard houses undergoing disintegration have exposed cracks in the government which is on the fast track with the airport project. The opposition Congress and High Court of Bombay in Goa have to take cognizance of this sorry state of affairs and demand an immediate halt to the project which is already floundering at the initial stage.
— Elvidio Miranda, Goa

DOES our ridiculous BJP government realize that India is first country to collect income tax from people having income above `2.5 lakh and gives reservation under “economically backward quota” to people whose income comes under `8 lakh?
— Fred D’Souza, Panaji

Power Minister Nilesh Cabral is absolutely off beam in stating that Social media needs to be curbed for politicians to sleep well.
It is in fact on account of their sheer misdeeds and acts of gross corruption that the politicians remain restless in bed. Those who perform their duties conscientiously should be having no problems getting very sound sleep.
While in the Opposition the BJP made the most of Social media but today they want a clamp down. But this has to be vehemently opposed as what is good for the goose has to be good for the gander.
In the current fluid state of political turmoil in Goa, most of the Ministers are on a looting spree with their own devious agenda trying to pocket the most while it lasts!
— Aires Rodrigues, Ribandar

The new Regulations are a death knell to all that is Goa. It is a means by which Goans will be totally out populated and then made invisible. All Goans will be uprooted from the coastal region which will be taken over by the vast population of India for building/buying their homes on the beach 50 metres from the HTL. Goans cannot match the Indian populations. Today, 243,180 Indians own between 7.5cr to 375 cr. Another 39 lakh Indians own between 75 L to 7 cr. Yes, they can and will buy up all of coastal and progressively other parts of Goa – only for holidaying. Note, at that time they will make sure locals are the outsiders- you will not have a home in this area- and see that you also do not have access to the beaches.
We need to fight on different fronts. First and foremost is to identify our enemies. These are the all-powerful builder and Hotel lobbies with connections in Delhi. Vedanta wanted to mine all the available iron ore deposits in Goa and scoot. These lobbyists are aiming for the same: make the most of the CRZ rules and then scoot because the same will last just 15 years till Goa becomes a Ghost City no different from Delhi’s pollution, criminal and bribe taking society. It is in this context that villagers must not accept any freebies, even to educational institutions, from these lobbyists.
Bosom partners of the above are our MLA’s, Panchas etc. Notice there has been no opposition from any of these people. Notice that the new regulations came AFTER the TCP expansion in Goa showing a pre-meditated move involving our local Ministers.
Anyone applying for construction within the 50 m line will automatically be granted permission by the TCP. To counter this, the coastal Panchayats must pass a law that all land from HTL to 500 mt be designated as ‘leisure’ cum picnic land for the use of locals. Outsiders can use the same for these purposes only for a hefty fee. This is in the same concept of public gardens. The time period must be for 60 years or two generations!
— R Fernandes, Margao

WHY ARE INDIANS CORRUPT?

I CAME across this very this very hard hitting article by a Brian from New Zealand and it is worth sharing for a debate for whatever it is worth. Why are Indians corrupt? Some clues:
Indians are Hobbesian (having culture of self-interest)
Corruption in India is cultural – Indians think nothing is peculiar about being corrupt, so corruption is widely prevalent
Look at the patterns and practices: Firstly, religion is transactional in India. Indians give God cash and anticipate an out-of-turn reward! Such a plea acknowledges that favours are needed for the undeserving. In the world outside the temple walls, such a transaction is named “bribe.” In June 2009 The Hindu published a report of Karnataka minister G Janardhan Reddy gifting a crown of gold and diamonds worth `45 crore to Tirupati.
When Europeans came to India they built schools. When Indians go to Europe and USA they build temples!
Indians believe that if God accepts money for his favours, then nothing is wrong in doing the same thing. This is why Indians are so easily corruptible. Indian culture accommodates such transactions.
Indian morals are wrapped up in ambiguity towards corruption and it is visible in Indian history. It tells us of the capture of cities and kingdoms after guards were paid off to open the gates and commanders paid off for surrender. This is unique to India. Indians’ corrupt nature has meant limited warfare on the subcontinent. It is striking how little Indians have actually fought compared to ancient Greece and modern Europe. Any invader willing to spend cash could brush aside India’s kings, no matter how many tens of thousands soldiers were in their infantry. Clive paid off Mir Jaffar and all of Bengal folded to an army of 3,000. There was always a financial exchange to taking Indian forts — Golconda was captured in 1687 after the secret back door was left open. There are many cases where Indians participated in treason on a large scale due to bribery.
The caste system separates Indians. They don’t believe that all men are equal. This resulted in their division and migration to other religions. There are no Indians in India, there are Hindus, Christians, Muslims and what not. Indians forget that 1,400 years ago they all belonged to one faith. In India everyone is against everyone else, except God and even he must be bribed!
— Santosh, Goa