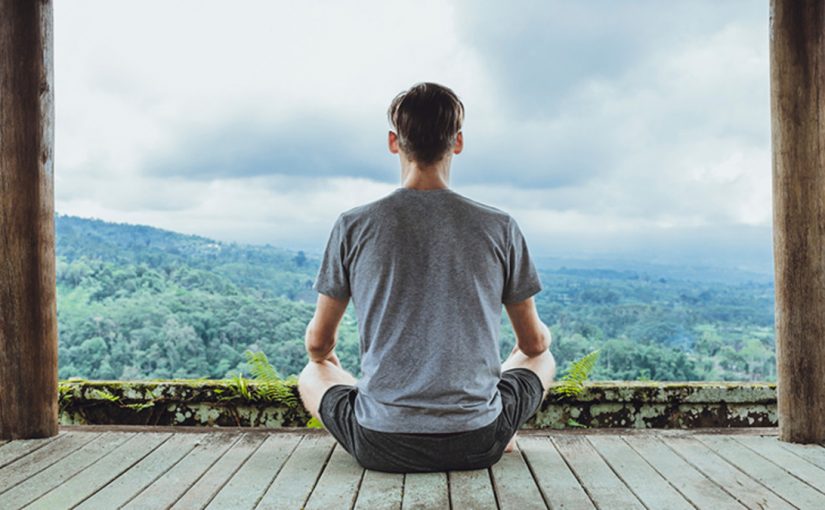 START TODAY: You don’t have to be an expert at meditation to feel its benefits. Just find a quiet place, get comfortable and focus on either and image or a steady sound like a fan perhaps. Even a few minutes of this will bring wellness into your life

In his continuing series of articles, Dr ALEX HANKEY, professor at SVYASA university in Bangalore, explains how what he calls the Vada-Pav model of biology helps in restructuring our understanding of biosciences

The eighth article in this series described how Vedic theories of Speech led me to work on a new theory of human cognition. It presented a revolutionary proposal made by combining Vedic insights in Shiksha Vedanga concerning the development of speech, with common sense observations of people with multilingual abilities so common in India. A new theory emerged that the human mind directly encodes ideas at a primary level, and only secondarily encodes information that is digitizable such as words used in speech. This agrees with the work of many great philosophers like Plato from ancient Greece, 2,300 years B.P., and Immanuel Kant from western Europe a mere 250 years ago. To put it in its modern idiom, it leads to a theory of ‘gestalt cognition’ – the word gestalt coming from German and indicating the cognition of ‘objects as wholes’, their detailed properties being recognized secondarily.
How could this be possible? The theory depends on new developments in biology, due to some of the world’s leading biological scientists who have studied processes of regulation in biology in remarkable detail, and from a variety of new perspectives. The result has been the emergence of a new subject within the overall framework of biological sciences, ‘Complexity Biology’. ‘Complexity’ is a popular buzzword, but few people have studied it in detail, because most of the world’s leading biologists have focused on other areas of their discipline, and have only occasionally taken an interest in the new field. One who has, and who has commented on it with great weight, is the new Past President of the Royal Society (P.P.R.S.), Nobel laureate Sir Paul Nurse, who wrote an invited statement on ‘Emerging themes within Biology’ to the leading journal, Cell, in which he stated: “For future understanding of biology, we have to get to grips with complexity. Most biological processes are based on complex networks involving many components.”
Complexity is at the heart of regulation in biology, something of profound importance to our overall understanding of the entire subject. Complexity has emerged from the study of various kinds of network in biological systems, genetic networks and networks of neurons in the brain as Sir Paul Nurse alluded in his statement quoted above. In fact, the two are highly connected. If a nervous system is to control cells in an organism, it has to be able to model the dynamic processes that it is regulating. The properties of genetic networks in cells and those of networks of neurons are thus closely connected. And it turns out that complexity properties can be used to show in detail how this happens. But to show this in detail we need to understand the central importance of complexity in biology, a topic to which I have devoted much time and attention.
My conclusions can be summarized in a new overall picture of biology that I have dubbed ‘The Vada-Pav model of Biology’. To understand the importance of regulation in biology and the primary role that it plays, I have developed a picture of the functioning of organisms, in which the biochemistry, presently considered the essence of biological functioning, is sandwiched between a lower pav of molecular biology, and an upper pav of regulation. The way that modern biology developed historically emerged from 19th century chemical analysis of simple molecules that scientists isolated from organisms like yeast. Alcohols like ethyl and methyl alcohol, and glycerine, and acids like acetic acid and fatty acids found in soap, followed by simple lipids (fats) and components of proteins like amino acids and heme. It was soon realized that all these were created in cells, by means of chemical reactions facilitated by protein enzyme catalysts (a catalyst promotes a specific chemical reaction). Painstaking analysis revealed that the proteins forming the enzymes were made out of polypeptide chains consisting of sequences and amino acids, concerning which information was stored in the genome of each cell. The key advance was to show how the structure of nucleic acids at the heart of cellular functioning (the nucleus of more complex kinds of cell, known as eukaryotic cells with many component parts, like cells found in animals, plants and fungi) could explain both how cellular reproduction preserved cell type (or single cell species), and the precise encoding of the sequences of amino acids making up the poly-peptide chains. The electrifying beauty of these discoveries by Francis Crick and James Watson at the University of Cambridge (before the latter moved to Harvard University), has captured the hearts and minds of all biologists ever since. It forms the core of Molecular Biology and has led to huge advances in all areas of the discipline from more detailed analysis of the tree of life, to forensic science, to the elucidation of human genome etc.
But captivating the minds of scientists to that extent led to an entirely lopsided understanding of biology, completely lacking in an essential feature of the overall discipline: regulation. That is remedied by the new subject of complexity biology. In the Veda-Pav model of biology, the marvellous discoveries of molecular biology are all assigned to the lower Pav, so the current state of biology is like an incomplete, open-face sandwich. It is not complete because no organism with only the lower Pav could withstand the challenges of the real environment in which, in order to survive, organisms have to adapt to many, many hostile kinds of condition, and also compete with other organisms. Even the remarkable structures found in the lower Pav of molecular biology cannot achieve the required adaptability.
What is needed to survive in the real world of ecological environments? The answer is an Upper Pav consisting of regulatory mechanisms that can adjust cellular functioning to the challenges found in the external world. Only when protected by an Upper Pav of regulatory processes can an organism meet environmental challenges, and take full advantage of opportunities that may be presented. Only then can it thrive and survive. To see why this is the case, consider the following:

Without detailed regulation, no organism can survive in the real world, because the Vada of Biochemical Pathways, and the Lower Pav of Molecular Biology cannot by themselves adapt to the challenging conditions that continuously arise. If temperatures change, then some chemical reactions may become faster, and others become slower, and the whole system will tend to become unbalanced. Another possibility is that a small amount of toxin may poison one particular enzyme, making the section of the biochemical pathway where it functions defunct. Without the chemicals produced by that pathway the cell may well be unable to survive.
So how does the cell or organism deal with these threats? The answer is that all biochemical pathways are closely monitored to see that they are functioning properly. If one slows down, then more is supplied of whichever protein enzyme has been poisoned. This process is called ‘Hormesis’. It is well recognized. Many scientific papers have been written about it. What the phenomenon implies is that cells engage in a process of micro-regulation, continuously adjusting amounts of each protein enzyme that they are using so as to keep in balance processes occurring on biochemical pathways in operation. Unless that is done, cells’ functioning cannot be maintained in balance, and cells cannot survive.
But one further aspect should be considered, competitions with their peers and rival organisms. Any organism that completes its life cycle and reproduces more efficiently, will increase in numbers, and outcompete rival organisms, particularly when resources get scarce, which they tend to do with hungry organisms consuming anything available. It follows that any organism which can maximize its efficiency of functioning will increase in numbers relative to other organisms in its environment. It is therefore unsurprising to discover that modern complexity biology has discovered how organisms achieve this essential feature of survival. The key turns out to be to maximize the sensitivity of regulatory responses to stimuli external to the cell, which for single cells will mean sensitivity of response to changes in the environment. This is where complexity biology comes to the fore, because complexity biology contains an essential principle known as self-organized criticality. This ensures that the locus of control of all cellular regulatory processes in biology operate under unique and unusual conditions — ‘critical instability’, studied by all physics students in 11th and 12th Standards, known in biology as criticality. This property will be fully explained in a future article as it forms the center of the most exciting and revolutionary research at the Yoga University, S-VYASA, where I have the privilege to live and work.