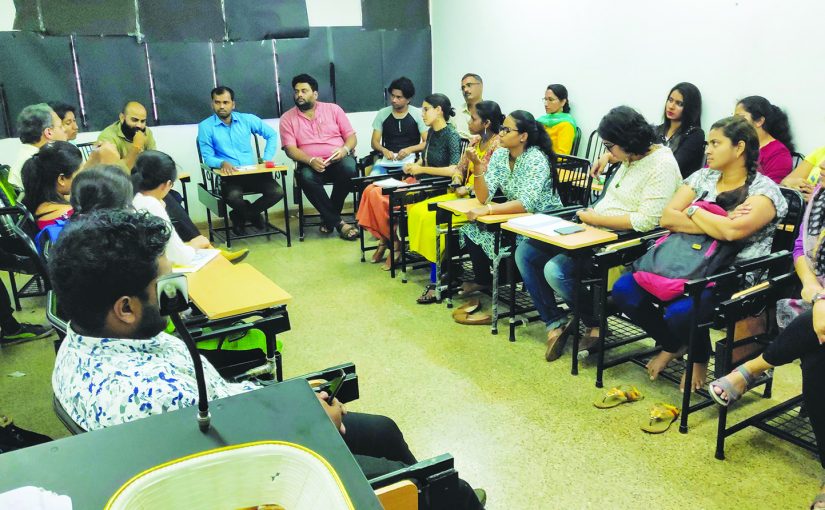 DEBATE ON RESERVATION: Pinnacle club from Goa University held a debate on the recently introduced 10% general category reservation in education and employment. A poll was taken to gauze audience reactions. Before the debate, 23 voted against the bill while only 7 voted in favour. However upon completion of the debate, 13 voted in favour while 17 maintained the against position. The debate was chaired by Asst Prof Ravaji Gaonkar and moderated by Ramrai Naik

A great and much respected leader, LK Advani, who was our country’s 7th Deputy Prime Minister from 2002 to 2004, arrived in Goa on January 24, for a few days private holiday.
I had the occasion to address alongside with him several public meetings when the very gentle and well mannered Advaniji visited Goa way back in 1977 after that State of Emergency. I also recollect amongst others the presence of late Mr Vishwanath Arlekar (father of our former Speaker Mr Rajendra Arlekar) and the late Mr Vasant Sabnis at those meetings. They were all earlier in the Jan Sangh and later merged along with 11 other parties and formed the Janata Party whose government in 1977 at the centre was headed by Prime Minister Morarji Desai. That experiment did not last for long. The rest is history.
On September 22, 2009, Goa’s ego puffed and arrogant Manohar Parrikar had the audacity to dub the veteran BJP leader LK Advani as ageing pickle that had turned very rancid and whose political innings were more or less over.
Now that Mr LK Advani is in Goa and Manohar Parrikar is in the departure lounge, the Chief Minister should seize this possibly final opportunity to kneel before the former Deputy Prime Minister and sincerely apologise for that very uncourteous comment against such a great leader. If Manohar Parrikar doesn’t, it would be my duty to try and attempt to heal that wound when I call on Advanji later this week.
Today Mr LK Advani even at 91 is young enough and not rancid as Goa’s Manohar Parrikar had tried to paint him. Mr Advani who did his early schooling at St Patrick’s High School in Karachi, may have later had his connections with the RSS, but definitely does not have the traits of spreading communal venom and would even today be much more acceptable than Narendara Modi across the country.
May be Mr LK Advani was very right in flagging the red card to Narendra Modi leading the BJP at the 2014 Lok Sabha elections. Narendra Modi’s Hindtuva agenda and his fanatic dream of making India a Hindu nation is out of place. Today our Hindu brethren have a much broader outlook and would definitely strive to ensure that our very great nation remains secular.
In Goa today there is widespread public outrage and resentment on the shameless manner in which the now factually so rancid Manohar Parrikar continues to be selfishly glued to the chief minister’s kodel. The only ones who are thrilled and having a ball of a time with the current chaotic situation are some rogue ministers who are taking the best advantage to their benefit in the prevailing mayhem.
India is now unofficially already in a state of emergency with a clampdown on our very fundamental rights and none other than senior leader LK Advani articulated this last year. Instead of properly governing the country, the BJP wants to dictate and control what we should eat, drink, wear, read and speak.
After over seven decades of India’s so called Independence, it is now time to wage yet another war at the ensuing Lok Sabha elections, this time to free ourselves from the very imposing Narendra Modi and the fascist BJP. Jai ho.
— Aires Rodrigues, Ribandar

PRIYANKA BOOST!
Priyanka’s entering politics will give a solid boost to Congress’ fortunes in the Lok Sabha elections this year as she is held in very high esteem by everyone. However, she would do well to engineer a pre-poll alliance with the BSP-SP combine in Uttar Pradesh so that there is no splitting of votes. Uttar Pradesh with 80 Lok Sabha seats accounts for more than one-sevenths of the total of 543 Lok Sabha seats and thus is crucial to the fortunes of the Congress. It should be Priyanka’s endeavour to form a pre-poll alliance with the BSP-SP combine so that she can begin her political baptism with a bang.
Such alliances in other states will also consolidate the prospects of the Congress and boost its image considerably. Priyanka has at last emerged from the background to the forefront of Congress’ prospects and with prudent pre-poll alliances all over India, to prevent splitting of valuable votes her appeal to the electorate will be a big boost psychologically to the Congress.
With her degree in Psychology, Priyanka is in a position to delve into the psyche of the electorate and provide exactly what the doctor has ordered for and influence the electorate far and wide in entire India to transform the Congress into a major contender with her prudent tact and persuasive abilities. Let all Indians wish Priyanka great success in the political firmament
— Elvidio Miranda, Panaji
VIJAI, BAD TASTE!
Cabinet Minister Vijai Sardesai is attempting to gain political mileage by raking up the issue of Opinion Poll. He has made a statement that Opinion Poll is more significant than Goa Liberation Day.
This statement is absurd because had Goa not gained liberation on 19 December 1961, Goans would have never got an opportunity to decide their fate through the Opinion Poll. It is unfortunate that the nephew of the great Gandhian Ravindranath Kelekar is making this claim.
Credit also goes to the then Chief Minister Dayanand B Bandodkar, who resigned from his post so that the Opinion Poll could be held under President’s Rule in Goa. Later in the elections held the same year, Goans elected Bandodkar’s MGP to form the government once again, with an even greater majority than the previous Assembly election.
Building statues and installing monuments is of no use. The interest of Goans should be protected by ensuring their well being in Goa, for that alone would be true homage to Dr Jack de Sequeira.
— Vikas Kamat, Aquem