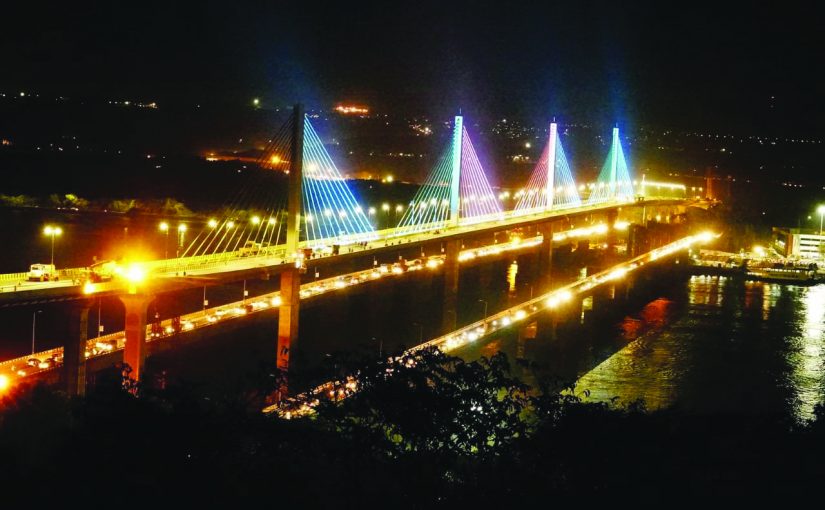 On Sunday, Union Minister for Road Transport and Highways Nitin Gadkari finally inaugurated the ‘Atal Setu’ — the third bridge over the Mandovi river in Panaji. The new bridge once opened fully, is supposed to reduce traffic at key entry points to Goa’s capital city, Panaji.
Work on the 5.13-km bridge from Pundalik Nagar junction in Porvorim to Merces junction began in July 2014, after Prime Minister Narendra Modi laid the foundation stone. The bridge, being built by Larsen and Toubro, was initially estimated to cost 482 crore, which has since escalated to860 crore.
The bridge was planned following the ongoing expansion of National Highway 66 which runs primarily along the western coast of India, down the length of Goa. The two existing bridges — one of which was rebuilt following its collapse in July 1986 and the other was built in 1998 — were considered inadequate given the increasing domestic and commercial traffic. According to data released by Goa State Infrastructure Development Corporation (GSIDC), at least 66,000 vehicles ply on the two existing bridges every day on average.
Apart from easing pressure on the two existing bridges, the new bridge will also serve as a bypass for those who want to travel from north to south without entering Panaji (they are currently forced to pass by the Kadamba bus terminus junction at the entrance of Panaji).
GSIDC’s 2017 estimates say that some 25,000 vehicles out of the daily aggregate of 66,000 would like to take this option. This, in turn, will hopefully result in a huge reduction of traffic snarls at the KTC junction.
As the bridge neared completion, demands were raised to name it after two of Goa’s prominent leaders — its first Chief Minister Dayanand Bandodkar, and the first Leader of Opposition Jack de Sequeira. One organisation even asked for the structure to be named after the current Chief Minister Manohar Parrikar, and there was talk in the BJP that the bridge should bear the name of party ideologue and Jana Sangh founder Deendayal Upadhyaya. The final name, Atal Setu, is in homage to former prime minister Atal Bihari Vajpayee.
According to an Environment Impact Assesment carried out by Mumbai-based Fine Envirotech Engineers, “mangroves shall be affected to a certain extent at some regions, however, will be replaced at suitable sites identified by Forest Department”. Activist Claude Alvares of the Goa Foundation said the GSIDC had flouted its undertaking given to the National Green Tribunal by cutting mangroves and filling the river with mud. GSIDC vice chairman Sidharth Kuncalienker denied the allegations: “We are going perfectly by the undertaking that we have given in the NGT”, later calling the bridge, Goa’s Taj Mahal!

The State government has forbidden the movement of two-wheelers and three-wheelers on the third Mandovi Bridge after it will be thrown open for vehicles from Tuesday. A notification by North District Magistrate has directed that the new bridge will also be a no-pedestrian zone.
Traffic going to Mapusa from the KTC bus stand Panjim will be allowed to proceed only via old Mandovi bridge (Panjim side) as one way.
Traffic coming from Mapusa towards Panjim will be allowed on new Mandovi bridge (Ribandar side) as one-way traffic.
The notification for the traffic circulation plan in the area of Mandovi Bridges and near KTC bus stand, Panjim comes in view of the opening of the cable stayed Mandovi Bridge for traffic on Monday, February 4.
“Traffic entering the third Mandovi Bridge will be allowed to be used as two-way. The speed limit on all the three bridges will be 50 kmph. All the three bridges will be ‘no halting’ and ‘no parking zones,” states the notification of the arrangement chalked out by the Traffic Department on a trial period of one month.
“Also dedicated lanes will be created for smooth merging of vehicular traffic coming from Malim side and desiring to proceed to Panjim and also the traffic coming from Panjim and desiring to take right and proceed to Journalist Colony. The agencies maintaining the roads have been directed to immediately construct a circle/tear drop island at KTC bus stand, Panjim to channelise the movement of traffic,” the notification further states.

The Goa Assembly has passed a bill amending a state tourism law which now will make drinking alcohol, cooking and littering in tourist places a criminal offence.
In addition, stores selling alcohol in tourist places have been barred from allowing customers to carry away bottles or cans containing liquor.
The amendments to the Goa Tourist Places (Protection and Maintenance) Act, 2001, which were approved by the state Cabinet last week, have now been sent for the governor’s assent. Under the new amendment, violators will be fined 2,000, and if the violation is committed by more than one person, the group will have to pay10,000. There are, however, no penal provisions in the new law.
Everyone from TTAG to legislators across parties have cautioned that implementaion is going to be critical.
Goa received 80 lakh tourists in 2018 — more than five times its population.