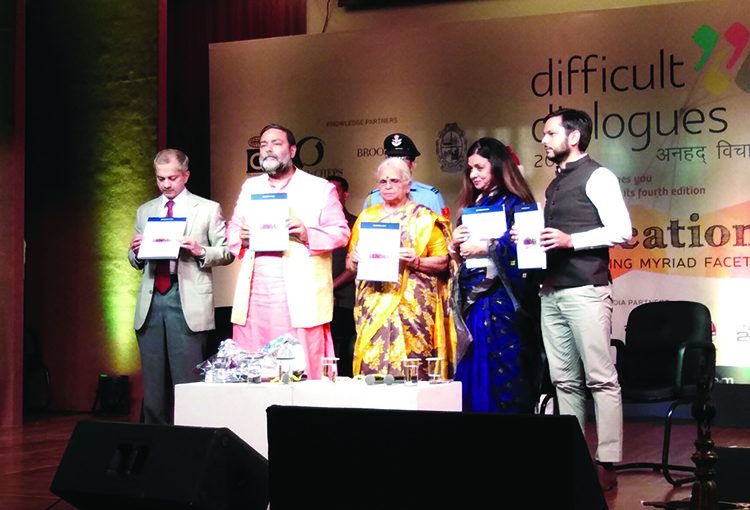 EDUCATION, ILLUMINATING MYRIAD FACETS: The 4th edition of Difficult Dialogues opened with an inaugural function at the Goa University on January 31, 2019. This year’s 3-day deliberations (at the International Centre Goa over the weekend) aim to address not just the problems of educating the mind but also the heart! On stage for the release of Difficult Dialogues brochure of essays are (l to r) ICG trustee Yatin Kakodkar, Goa University vice-chancellor Prof Varun Sahni, Governor of Goa Mridula Sinha, Difficult Dialogues founder Surina Narula and Brookings India fellow Constantino Xavier

A VERY desperate Manohar Parrikar who now is unable to even walk or talk is shameless, selfishly clinging on to the chief minister’s chair — hoping it will assure him a statue. The performance of the current BJP led coalition government would have to be rated as big zero given that Goans were promised the moon with zero tolerance to corruption and good governance. It has been only U-turns and rampant corruption all the way.
The cavalier manner in which this current government has been heartlessly and mercilessly destroying Goa is a matter of grave concern. It is so very distressing to see and be witness to the continuing daylight rampant destruction and devastation of Goa. The BJP promised “parivartan” and “acche din” but Goa is sadly by the day now just getting further corroded beyond recognition.
It should have been the endeavor of those in power to at least salvage and safeguard what remains of Goa. Unortunately, Goa is getting defaced at a very electrifying speed. Posterity will never forgive Manohar Parrikar and his ministers for the selfish and dubious role they played in further irreparable damage and destruction of what a once beautiful Goa, the paradise of the East. Sorrowing lies our Goa.
— Aires Rodrigues, Ribandar

OPEN LETTER TO DAKSHINAYAN ABHIYAN
I AM one of those who attended your open forum on February 30, 2919. When I saw the list of speakers, I was thrilled. I was certain this forum would become a guiding light for voters for the LS elections. It started with BJP bashing and quite rightly so, they deserve every bit of criticism.
But the slowly, the speakers began manipulating the audience and pointing towards the Congress. One of them even said, other parties should sacrifice? This was followed by a very eminent personality stating that this election is between grey and black and we should go with the grey. Undoubtedly, he was referring to the Congress.
If you remember in 2014 there was a huge anti-Congress wave which brought BJP to power. Today, they have only reversed roles. They grey has become black! What happens after five years? Role reversals again? I’m a youth and seek a solution beyond “grey” and “black.” Just because BJP turned out to be a complete failure doesn’t make Congress the strongest contender by default! Especially when the Congress is the main reason why we have BJP. Be it at the Centre or at State.
With so many political stalwarts and experts who spoke this forum could give us only a choice between grey and black! I am disappointed. If this is the kind of advice our political experts have to offer voters I’m afraid that future generations will even hesitate to enrol themselves as voters. Every election we vote for a change and not just for a change of party!
— Shared by Edwin Mascarenhas over WhatsApp, Goa

BEWARE DELHI!
IF YOU are travelling through New Delhi railway station, remember to be extra alert and cautious. I say this because I had a rather experience there recently. On January 25 I was with a group of students in our Nizamuddin Express compartment, the journey back to Goa had not yet commenced, so I stepped out of the train to pick up some refreshments.
I had left my handbag with one of the students in the compartment but he did not turn out to be a good caretaker and my handbag was filched by a pickpocket. I lost my ATM and ID cards, driving license, cash, smartphone, some knickknacks. When I returned I noticed the loss of my bag and we tried calling the railway authorities repeatedly but no response.
We also caught hold of the TC about the pick-pocketing incident and to lodge a complaint — but he only laughed and said, “Oh, this kind of a thing happens in Delhi all the time! Don’t bother complaining!” In the light of this experience I would just like to caution all fellow travellers to be extra careful while travelling in Delhi and especially anywhere at the railway station about their belongings – pickpockets may be watching nearby. And the authorities are of not much help.
— Steffi Dias, Panaji

LONG-SUFFERING PUBLIC!
I have been reading with disgust all the hullaballoo about the new bridge absurdly called Atal Setu. Anyone would think we are living in Delhi and not in Goa (no ill feelings for Vajpayeejee here)! If only our roads and pavements in Panaji, other towns and Goa in general would be constructed, repaired, as quickly as Manohar Parrikar’s bridge over the Mandovi river. Instead here we are Goans struggling and tripping over bumpy roads, potholed streets, ill-conceived and maintained junctions and crossings…they don’t get repaired for days, weeks, months, years. Hope the new bridge doesn’t fall down in the near future!
— Veera Kamat, Goa

MEDITATION
I’ve been reading your series ‘Becoming Indian’ over the past few weeks. I have to admit while a lot of the content goes over my head, some of it does sink in. I’ve found myself trying to meditate everyday, although I don’t really know the difference between Transcendental Meditation and ‘regular meditation’.
One thing I’d like to share is that on googling the Maharishi I came across many highly critical articles and view points. However, I finally concluded that whether or not the Maharishi was truly a great man (as the author seems to think) or not, doesn’t take away from the usefulness of regular meditation. That’s one thing that’s almost uniform online — everyone agrees that meditation is good for you and at the very least can do no harm!
— Blaise Dias, Panaji