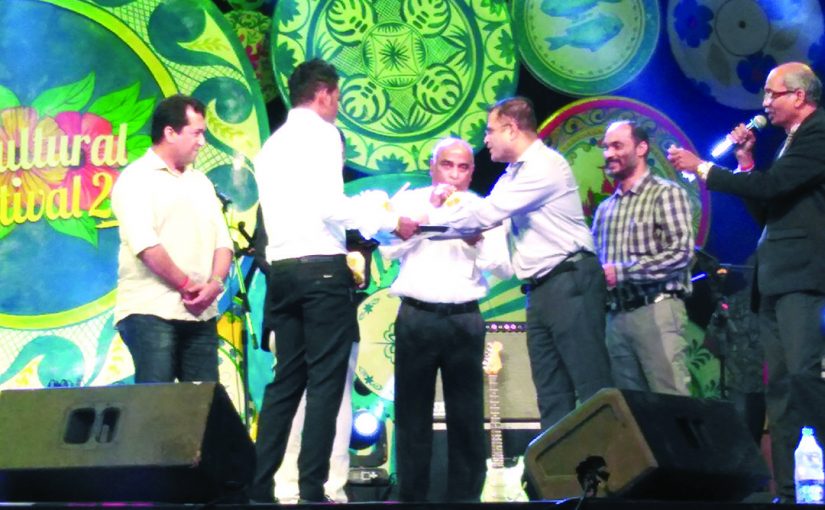 ON STAGE: Lighter moments on stage at the 5-day Goa Food & Cultural Festival which opened on Feb 6…Tourism Minister Ajgaonkar sips on some narial pani with Goa Tourism officials

IT was case of happy days are here again! A smiling and amiable Tourism Minister Manohar Ajgaonkar inaugurated the 5-day extravaganza of Goa Food & Cultural Festival on Wednesday, Feb 6, 2019. Afterwards he walked around the venue of D B Bandodkar ground leisurely greeting various stall holders, accompanied by an entourage of Goa Tourism officials, friends, well-wishers, media people and photographers. The entertainment began once they were in the VIP enclosure for the entertainment to begin.
After declaring the festival open Mr Ajgaonkar spoke a few words expressing his desire for the festival to continue attracting tourists to Goa which has much to offer tourists as well as Goans seeking some recreation. The festival is now on the map of tourism and apart from the food and beverages alcoholic and non-alcoholic, the department organizers have also fine-tuned a number of cultural highlights by way of dance performances, cooking competition (Feb10), live acts featuring a mix of local and national music makers (Antariksh, Thaikkudam Bridge, Bad Blood, Pineapple Express, Altitude, Lagori) and more events during the different days of the festival.
The festival has become a favorite on the tourism calendar as also locals who catch at least one evening eating out, dancing and relaxing here under the stars. There are always some new offerings at the festival along with ever popular seafood, Goan cuisine, this year there’s a lot of new beer coming into the market to be seen and here are outlets doing unusual things like offering cocktails of gin and sugar cane juice; also a colorful range of “neon” cocktails.
The MC was anxious to promote a “Spanish Beer” and those who made a curious beeline to the stall were amused to find out that this was a Spain-based company which was fermenting its product beer in Rajasthan.
Spokesperson Vijay of Mahou India here confirmed, “The ingredients of beer come from Spain but it is all fermented in Bhiwadi in Rajasthan and marketed in India!” There are several beers from abroad making an entry into the Indian beer market.
There are also several wine outlets with the familiar Goan home-made Santanse Wines (of jambul, cashew,ginger, grape, anar, apple, coconut, papya, beetroot, pineapple and more) and you may want to try out the new fine alphonso mango wine of Pomar De Frutas (an all-Goan wine).
Amongst the foodie stalls Janet & John’s are regulars and this year be sure to call at Mujtaba Haaziq and Tasneem Shuja Haziq’s amazing Wada Wow stall where you will find a range of most delectable “garma garam” wada stuffed into an extra soft pao along with savory crunchies, chili powder, tamarind chutneys, lots of greens….and the selection is really wow! Exquisitely savory moon dal samosa here and take a look at their special ice-cream menu. The Haziqs are from Mapusa.
And next door is Ziki’s Biryani, a familiar name in Panaji. Check out Smitha Vijay’s Ripples Gastropub menu which lists a tantalizing starter called “Dalchawal Cheese Bomb with Acharimayo & Green Chutney” (Rs100), there are so called ripples-style burgers of mushroom, chicken and fish. All sound good here.
This is to say there is much that is aesthetic and agreeable to take pleasure in at this year’s Food & Cultural Festival 2019 (but alas, plastics are everywhere)! Entry is free and it’s a pity Goa Tourism didn’t stretch this to Valentine’s Day coming up on February 14. Last day of the festival, Feb 10.