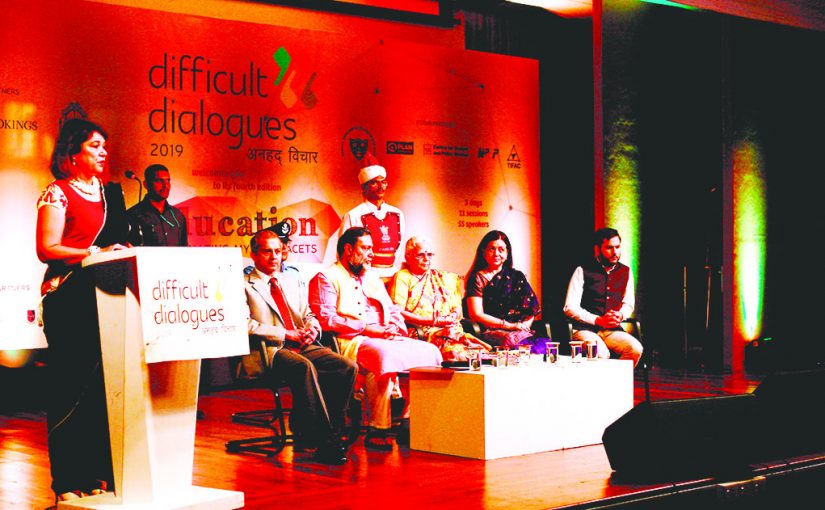 At the 4th edition of Difficult Dialogues which was inaugurated on Jan 31, 2019, they’re discussing the grim scenario of education in the country. Keynote speaker and trustee of International Centre Goa, Yatin Kakodkar, put some interesting statistics before the audience when quoting a Pratham report he said, “Every year 11 million people join the work force only to find there’re not enough jobs.” Also, 50 percent of ten-year-olds in fifth standard cannot read stories meant for the second standard and only 25 percent can do sums. It’s disquieting comment on the quality of education, teachers and teaching itself.
Mr Kakodkar pointed out that investment in education is best since this is linked with economic development and in the last three editions of Difficult Dialogues they’ve been dwelling on education, economics, healthcare and gender equality back and forth.
He has no doubt that India can make it into the 21st century if it addresses the challenges of rapid sustainable economic development with education keeping pace and the creation of jobs for the country’s growing working age population. For this Mr Kakodkar said we must not slip down to four and six percent of economic growth but achieve a continuous eight percent margin, “Next year 125 million will join the labor force but only 11 million may find employment!”
Others who spoke included Goa University vice-chancellor said only with intense, critical thinking change can be the result; philanthropist Surina Narula prophesied that the country has a great future ahead of it; Dr Constantino Xavier reiterated that primary to development is health and education and these are basic rights, ”Give opportunities to young girls and women too.” A video message from Lord Chris Patten of Oxford endorsed the message of basic health and education being the key to economic growth; Paul Flather expressed Oxford University’s keenness to explore a myriad ways to developing a new India and there was Governor Mridula Sinha who said she believed in Gandhijee’s “Nayi Taleem” idea of all progress beginning from village and gram sabha level.
Undoubtedly, this year’s Difficult Dialogues deliberations will throw up a whole lot of enlightenment on the subject of education and what paths it must tread to see achhe din for all its people.