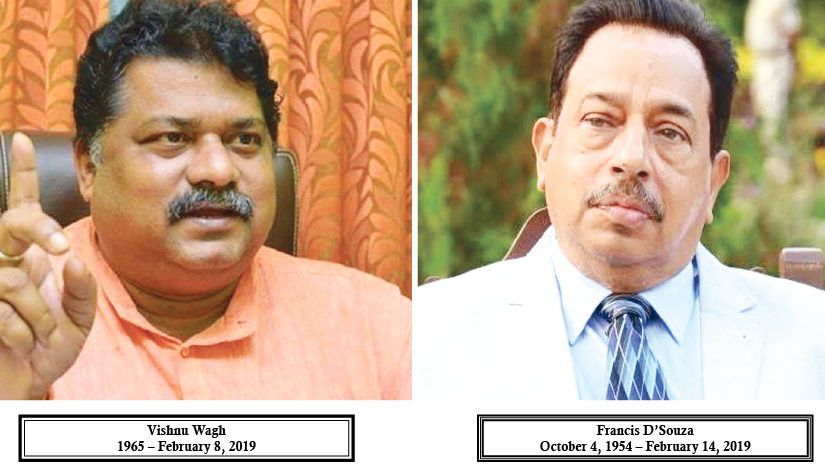 NEVER has Goa seen such a gloomy and disquietingly ominous weekend ahead. With the passing away of two of Goa’s politicians — one an often described gentleman politician in Francis D’souza and the other an irreverent, eloquent poet politician in Vishnu Wagh. Both passed away prematurely, Vishnu Wagh was just 53, and Francis D’Souza was 64. Surely a few pertinent questions must arise? Does the quality of morality politicians practice in the name of religion or otherwise, have a bearing on the quality of governance enjoyed by the people of a state or country and also on the quality of health politicians enjoy?
What do politicians do so wrong in their chosen vocation of politics to invite ill-health prematurely and contradictions in their life? The cardinal principle of governance is to serve the people of a country, improve their lot in life — not just in the case of khaas aadmi but more so in the case of aam aadmi. I asked a well-known journalist, “You know both Francis D’souza and Vishnu Wagh and their political history more than me! Don’t you want to write glowing obituaries to them now that they are dead?” His one-liner response, “What did they do for Goa while they were alive?”
Most media people today are a disillusioned, cynical lot, but then perhaps they always have been. We witness increasingly more and more young people seeking entry into political careers because they perceive politics as a good business proposition — to feather their own and their kith and kin’s nest with feathers of varied hue! “Government servants” politicians may call themselves but nobody misses the fact that political jobs are incredibly fruitful…notice the lifestyles of gross plenty our politicians live and ultimately it takes a toll on their physical health if not their political health.
Our politicians perceive themselves as privileged masters or a special breed of VIPs… forever seeking dynastic favours and one-upmanship in cracking deals in their own self-interest rather than in the peoples’ long term interests. Where has larger good of people gone in politics today? It’s more like the larger good of politicians and their families we see all around us!
This is not to say politicians are not human or humane but they are human enough as long as their bidding is done, terribly inhumane if anyone questions their decisions. Politicians hopping parties with the blink of an eye is old hat now in the modern-day political history of this country with the Congress and BJP being the two major opposing parties — in and out of power we see politicians perennially roosting on a fence, shamelessly hopping over to whichever party is in power. Is this a moral crisis or not considering parties have their own political agenda?
When politicians play politics arbitrarily and cursory public interest — they practice a morally degenerative kind of morality, be it in the name of religion — which can impact stress levels in their life of a presumably unknown or unaccepted kind! This ultimately backfires on the quality of health they enjoy good, bad or ugly, and for how long? There is a lesson in all this for politicians and a younger generation of youth seeking entry into political careers. Cesspool of politics, someone once called it.
How long can a politician last happily ever after in a cesspool of politics? Where there is no enduring reverence, respect, love, affection, something called fidelity to a common pool of time-tested evergreen values by which surely all loving parents bring up their children? The software foundation of our moral values is equal to the hardware foundation of our corruption in chasing power and vainglorious ambition…look at the excessively material lifestyles our politicians lead and seek — wine, women and song not in moderation but in plenty oftentimes!
If it all leads to early health issues of diabetes to begin with, then heart disease, cancer sooner or later…can we call it natural justice taking its own logical course? Do political careers go for an early toss because of the grossly undisciplined abuse of mind and body politicians practice, while preaching otherwise? Is lying, cheating, stealing, brutalizing, justifying, killing — against an inane corrupt political backdrop — not a serious charge when it comes to the kind of health we enjoy or suffer?
Most politicians today swear by hypocrisy and U-turns when dicey political situations arise! Nobody is a saint in politics, you will say, not in real life; then of what use is our education if moral turpitude dogs every decision be it in politics or in personal life? Moral turpitude has long-term consequences on the quality of a polity of a country while it also takes a toll on any kind of a conscience politicians may swear by! With the passing away of gentleman Francis D’Souza and enigmatic Vishnu Wagh in their mid-60s — tragic if we see it in larger perspectives — we must individually and collectively make connections between the kind of honest or contrary morals we practice and the quality of health we suffer from, not to mention the kind of ill-health we inflict on the innocent out there in public life about which we neither care to know or care.
After all this may one say rest in peace Francis D’Souza and Vishnu Wagh? There is a lesson somewhere in their dying which all Goa and all India should sit up and take cognizance of in and out of politics. In the larger interests of personal reformation and achhe din for all! Or is that too much to ask for in a country which has seen some gloriously educative history come and go?