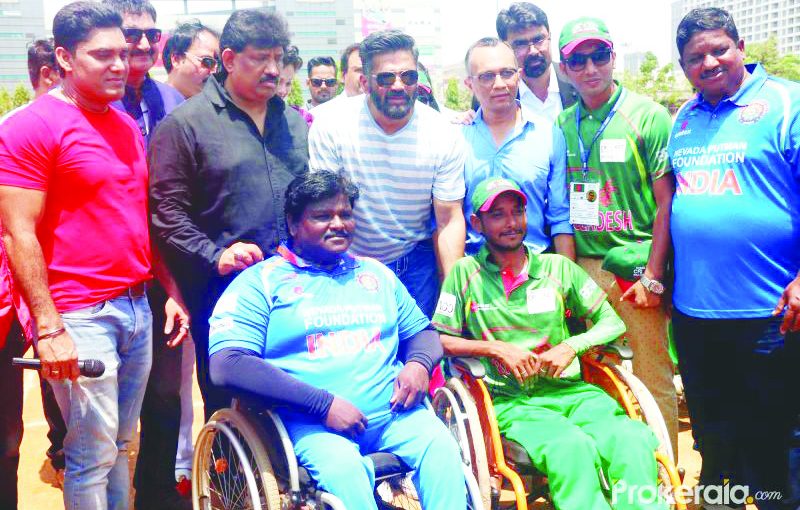 STARS: Actor Suniel Shetty at the semi final of the India-Bangladesh Wheelchair cricket tournament with the team captains

For the first time in Goan history, the State will play host to 14 wheelchair cricket teams from across the length and breadth of the nation who will be part of the Goa Cricket League — GCL – 2019. The All Goa State Cricket Cup – GCL 2019 incorporating wheelchair cricket — albeit with different criteria compared to standard international cricket norms, will be held at Shiroda and Ponda in the month of March with over 200 local teams participating, both in the Under-18 and Open categories together.
In addition to the visiting wheelchair cricket teams, there will be two Blind Cricket teams which will play an exhibition charity match in Panaji.
Registration for the same has already begun and more than 32 teams from all over Goa have already registered for the tournament in the open category. Registration for the U-18 category will begin on February 21, said the organisers.
In addition to these matches, there will be special inter-state charity matches for Blind, Differently-Abled and Wheelchair cricketers along with TV and Bollywood celebrities and actors. The specially-abled teams will play exhibition matches only with the length of the pitch and the field being different.
This state-level tournament is being organised by the Goa State Differently-able, Wheelchair and Blind Sports Forum (GDWBSF). It is however not affiliated to the Goa Cricket Association.
“This is the first time that cricket matches for the Blind, Wheelchair and Differently-abled cricketers are being organised in Goa,” event co-organiser and media spokesperson Flynn Remedios said, adding that an India-Bangladesh Wheelchair cricket tournament was held in Mumbai last year with the visiting Bangladesh wheelchair cricket team being sponsored by the Bangladesh Cricket Association, the official national cricket body of the country.
The Mumbai tournament was organised by the Nevada Putman Foundation in association with the Disabled Sporting Society and supported by the Gyandeep Seva Charitable Trust of Mumbai, said Remedios, who was also associated with the event.
At the India-Bangladesh Wheelchair cricket tournament, the Indian team was captained by Ramesh Sartape of Maharashtra and the Bangladesh team was captained by Mohammad Mohasin.
“We are in the process of inviting teams from all over India for the Blind, Wheelchair and Differently-abled cricket matches”, said Remedios. The grand prize for the tournament will be 5 lakh, with several other prizes for the participating and winning teams. The grand prize for the wheelchair cricket team will be2.5 lakh with the 1st prize for the winning team being `one lakh.
According to Remedios, Wheelchair cricket teams from Delhi, Gujarat, Maharashtra, Mumbai, Rajasthan and West Bengal have already confirmed their participation. Two Blind cricket teams are also on the verge of confirming their participation in the series.

GSPCB BACKS DOWN; relies on reports FROM Phase 1 of a study by IIT BOMBAY

The Goa State Pollution Control Board (GSPCB) withdrew the show cause notices it had issued earlier in the week to two coal handling units — Jindal-owned M/s South West Port Limited (SWPL) and Adani’s Mormugao Port Terminal Limited — thus allowing them to carry on with coal operations at the Mormugao Port Trust.
Although reports of site inspection conducted by GSPCB of SWPL, Adani, MPT and readings of the Air Quality Ambient Monitoring system were considered, GSPCB relied on a Phase I report of Source Apportionment Study conducted by Indian Institute of Technology (IIT) Bombay that found coal handling is not a major contributor to pollution in Vasco.
While discharging the show cause notices, the Board directed the coal handling units to pay penalty on line with polluter pays principle for exceeding the Particulate Matter (PM), in the first week of February. The units will also have to install CCTV cameras at the site for real time viewing of pollution control measures adopted by them. However these are poor comfort to the citizens of Vasco whose cheers at the anticipated reduction in coal-handling have hardly died down.
A disgruntled citizen angrily pointed out that CCTVs aren’t the best medium to evaluate the extent of coal dust pollution and suggested that the officials behind this decision should sit and watch the coal handling regularly and then measure the damage to their lungs instead of relying on incomplete reports from non-local organisations.

The state government on Thursday informed the Bombay HC at Goa that it has identified and allocated space for a cross-matching laboratory for organ transplants and that it will be completed within six months. The lab will be set up at the old anti-retroviral therapy (ART) centre in the foyer block, on the first floor.
Advocate Wilbur Menezes representing the Mango Foundation filed a PIL for the setting up of a state organ and tissue transplant organisation (Sotto) and for transparent waiting lists for organs so that recipients don’t lose out on opportunities of life saving organ and tissue transplantation to recipients from other states.
The HC in December had directed the state and Central government to take necessary steps to make the Sotto expeditiously functional within a period of four months and the cross-matching lab functional within six months.
Medical Superintendent GMC Dr S M Bandekar has been appointed as the nodal officer of the Sotto.