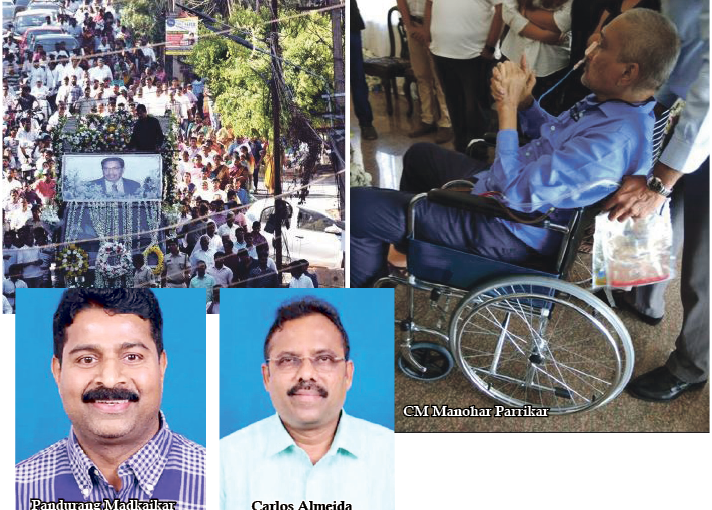 EXTINCTION: With their MLAs dying or seriously ill, the 14-member BJP is facing extinction in the state, particularly with the MGP threatening to withdraw support

With the death of Mapusa MLA Francis D’Souza and three other MLAs — Pandurang Madkaikar, Carlos Almeida and Chief Minister Parrikar himself — not fully fit, the BJP in Goa seems to be literally dying

The BJP in Goa may or may not be voted out of power. But it is already in the minority due to the death and disability of the majority of its original 13 MLAs. Even the defection of Vishwajit Rane to the BJP which increased their numbers from 13 to 14 will not save them. Nor the reduction in the number of seats the Congress has in the assembly from 17 to 14 because of Vishwajit’s defection and Subhash Shirodkar and Dayanand Sopte elected on the Congress ticket choosing to join the BJP. However they are not MLAs yet so the strength of the Congress remains 14.
While the original strength of the BJP was 13 seats in the 40 member assembly in the 2017 election, it improved its tally by one to 14 when Vishwajit resigned from Congress and got himself re-elected on the BJP ticket. Their numbers have declined from 14 to 13 again, following the death of former deputy chief minister and Mapusa MLA Francis D ‘Souza. Of the remaining MLAs of the BJP Pandurang Madkaikar is still to recover from the stroke that he suffered. Carlos Almeida who also is recovering from a serious illness is not yet fit to participate in Assembly proceedings. While Vishnu Wagh was not given a ticket by the BJP in the 2017 elections and therefore his sad passing away will not make any difference to the arithmetic in the Legislative Assembly, the leader of the house, the chief minister himself has not fully recovered from the pancreatic cancer that he has been suffering from over a year which prevents him from playing an active role in either the government or the Legislative Assembly. If you take into account the sick and ailing BJP MLAs the number of active BJP MLAs comes down to 10 against the Congress number of 14.
It may be argued that due to the support of the three Goa Forward MLAs and an equal number of MGP MLAs, the BJP has a majority. The numbers presuming the continued support of the MGP, Goa Forward and the two Independents adds up only to 18 MLAs in the 40 member house. It is now however clear that if the MGP plans to break away to contest the by-election to the three constituencies — Mapusa (due to the death of Francis D’Souza), Mandrem and Shiroda due to the defection of Subhash Shirodkar and Dayanand Sopte — the strength of BJP in the assembly stands reduced 15. Of the 15 MLAs Promod Sawant is the Speaker and therefore cannot vote. So the actual number of the BJP at 14 — the same as the Congress.
Both the BJP and its allies and the Congress post the faction of 14 members each in the 39 member legislative assembly. The future of both BJP and the Congress depend on the Goa Forward and the Independents who between them have six seats. If the Goa Forward ties up along with the Independents with the Congress it will have the clear majority in the 39 member house and can stake claim to join the government. The problem is that the Goa Forward will extend support to the Congress only if Digambar Kamat is nominated as the chief minister by the high command, which is unlikely considering the opposition to Digambar from AICC General Secretary Luizinho Faleiro, who is desperate to become chief minister again. Though Luizinho has been chief minister in the past he has never completed a full term as chief minister. Coincidentally Manohar Parrikar has also not been able to complete a full term in office, though he has been chief minister three times. The only MLAs who have completed a full term in the office are the veteran Pratapsingh Rane who has completed five terms and Digambar Kamat who has completed five terms.
Never was the time more ripe for the Congress to topple the Parrikar government. With the strength of the BJP coming down drastically, and the MGP threatening to part company, the BJP alliance is now in a minority. If the Congress wins all three bye-elections and gets the support of the Goa Forward and the two Independents it can legitimately stake a claim to form the government. The governor off course being a BJP fanatic may not let them form the government.
The biggest probability is that she will dissolve the Assembly and declare President’s Rule. However the Congress can still form the government if the BJP lose in the Parliamentary elections which with any luck will be held along with the by elections. The Goa Assembly has only completed one year and the Congress still has the opportunity to hijack the ‘non-government’.
A compromise solution by the Congress high command could be to choose Ravi Naik as the chief minister as a compromise between fighting senior leaders Luizinho and Digambar. Ravi Naik has the best record for law and order even though his son Roy was accused of colluding with Israel drug lord Atala. Not surprisingly Ravi Naik seemed to be celebrating the death of Francis D’Souza at the Fortune with his son on Valentine’s Day.