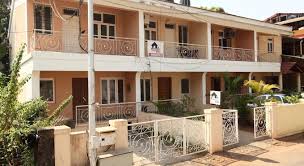 SERENITY: The calm and quiet of old colonies will be destroyed by re-development Ala Kamat Royal with the FAR increased to 24 mtrs which roughly corresponds to ten floors as against the present maximum of six floors. No thought has been given to how the takeover by Panjim land sharks will affect the already over-stressed infrastructure in the city. The new ODP is a dumb thing to do for a smart city

The Goa Bench of the Bombay HC issued notices to various government bodies on the legality of the revised Panjim Outline Development Plan (ODP) which has been challenged in a petition that names the North Goa Planning Development Authority, Commissioner of the Corporation, Chief Town Planner Sidharth Kuncalienker and Michael Lobo. The ODP for Panjim city, which was modified on December 28, 2016 , will convert even serene enclaves like La Campala Colony, St Mary’s Colony, and other older three-storied housing colonies in the Campal – St Inez area into another concrete jungle. As in the case of properties along the Miramar-Dona Paula bypass road, the FAR has been increased to 24 mtrs (residential) and 32 mtrs (commercial) in several parts of Panjim including Campal, St Inez, Adarsh colony, Miramar, Dona Paula, Mala, the Altinho hill slope and the Ribandar hill slope. This will destroy the city which does not have infrastructure to even support the existing population! The petition prays for an order quashing zone changes and as interim relief has asked for a stay on the December 28, 2016 notification. Goan Observer brings you exclusive extracts of the petition…

THIS HUMBLE PETITION OF THE PETITIONER
MOST RESPECTFULLY SHOWS

Particulars of the Cause against which PIL is filed