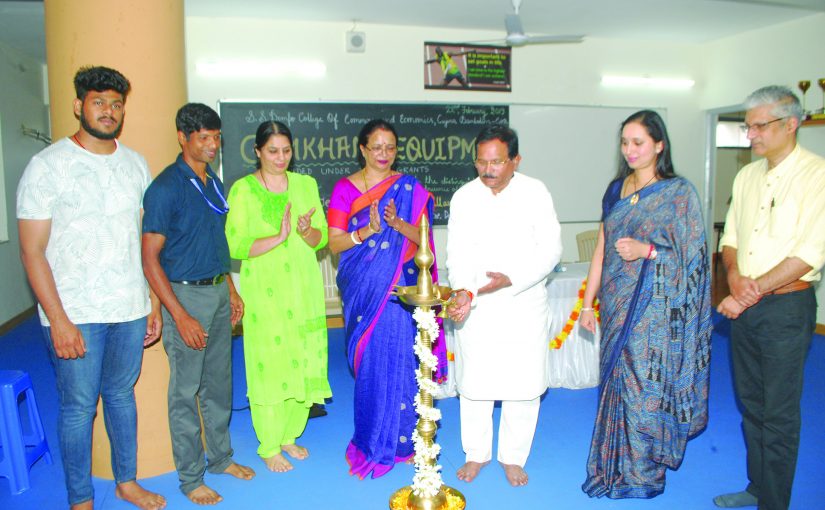 1,000 PROJECTS COMPLETED! More than 1,000 projects have been completed under the MPLAD Scheme. Shripad Naik inaugurated the Gymkhana at the Dempo College of Commerce and Economics under the scheme. Under the MPLAD Scheme he provided `15 lakhs to the college. Speaking on the occasion, Shripad Naik lauded the college for opening the gym at campus. He said that changed lifestyle is the main cause of ill health. Pallavi Shrinivas Dempo, Trustee, Dempo Charities Trust, Radhika Naik, Principal, and others were present on this occasion

NAVELIM MLA Luizinho Faleiro recently disclosed that he is not at all interested in contesting the upcoming Lok Sabha elections. The excuse he gives is that he was not allowed to give the letter to the governor for formation of the government by Central Congress observer, Digvijay Singh, even though the party was the single largest party after the last Assembly elections results in Goa. If that was really the case then instead of merely resigning from the Pradesh Congress Committee as president and refusing to take post of leader of Congress Legislative Party and leader of Opposition even, though he had the support of 13 MLS which he now claims, then why didn’t he expose the dirty games of Digvijay Singh (dalal or so called Congress observer) then itself?
Why wait so many months to expose the man who is well-known for mostly coming to do his own settings so very often in Goa? Or is Mr Faleiro (currently getting frustrated without political power) finally intending to join the BJP like his former comrades Mauvin Godinho, Vishwajit Rane, Subhash Shirodkar, etc., for the sake of his own personal development and making some more bucks by issuing such a sudden outburst through the media against his own Central party leaders from Goa?
Such outdated, power-hungry senior Congress leaders like Luizinho Faleiro, who cannot function professionally, who believe in filling their coffers for their own future generation — by officially supporting the destruction of Goa for the last so many years — should immediately take permanent retirement; allow some younger, newer leaders to over the reins of the Congress party to really rejuvenate the same in Goa. Are all so called senior Congress leaders listening and really interested in stopping the destruction of Goa? Only time will tell!
— Jerry Fernandes, Saligao

JOB DECEPTIONS
THE Aam Aadmi party has urged youth thronging government offices, standing in serpentine queues, aspiring for government jobs, to exercise caution in the present situation as the prospects of meritorious candidates getting jobs are practically nil.
Addressing media recently, AAP convenor Elvis Gomes said expressed his anguish and shame about the long queues at government offices merely for collecting forms, filling them in, submitting them – when an online procedure count have been more effectively adopted to make it easier for thousands seeking jobs.
Gomes said transparency is the last word for the government which has emerged as big time job brokers with the blessings of ministers, who are given the task of assuring everyone approaching them for jobs for a consideration running into crores. Asked Gomes, “In our childhood, we queued up for movie tickets and often injured ourselves. Is the situation same today? Then why are youth made to queue up? For whom is technology and for whom the IT Parks?”
Citing specific instances of job brokering in the Health and Power Departments, Gomes said it was a cruel blow to candidates from places other than the constituencies of the ministers who spent hours going through the process, “Look at the selection in the case of pharmacists. Out of eight jobs, six are offered to candidates from Sattari. One is from Satari staying at a different location and other one is married in another town who we are told is originally from Sattari. Manohar Parrikar is helpless. Why waste time of the others? Out of the nearly 25,000 applications for 167 jobs in the South Collectorate alone, 24,843 will go away empty handed not because they don’t deserve the jobs but because they have no connection with the bedroom boys of the minister. This is not fair.”
— Pradeep Padgaonkar, General Secretary, AAP, Goa

USELESS LABS
Goans are made to believe that with the setting up of a costly FDA Lab at Margao to check for formalin in the fish, they are now safe. The GSPCB checks for coal in air pollution in Vasco, but found nothing amiss? What good are labs. People could see blackened feet of toddlers and the costly Lab. Cannot! When corruption prevails at every instance, what good are the Labs?
What is required now is a ‘Lab’ to check corruption. Goans must stop being naïve! And know all of you, there is a check for corruption. Yes, it’s called vote without cash or brainwash.
Just see our height of naïveté! There was a tragic drowning death of a local student when on a picnic with his friends. The Investigating cop threatened the victim’s friends of implicating them in the formers ‘murder’ if they did not pay him `25000 each!
Activate your ‘vote lab’. 2019 elections is make or break.
— R Fernandes, Margao