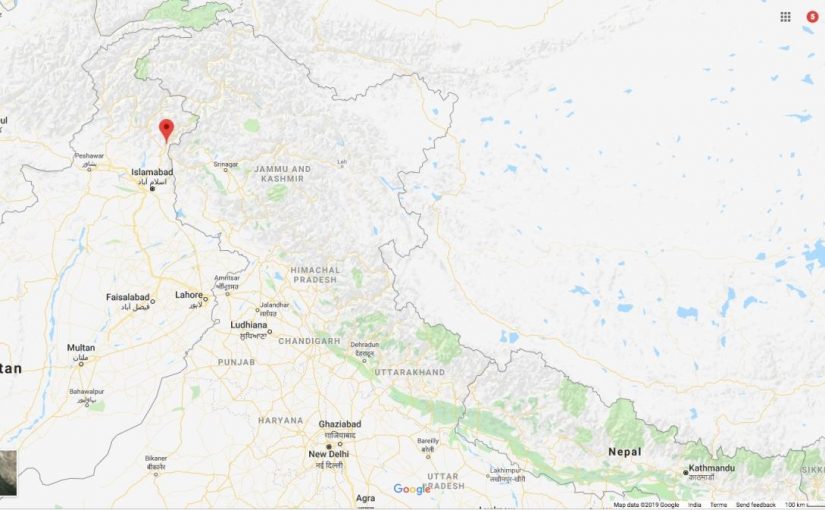 TARGETED: Balakot, close to Isalamabad and suspected to be the headquarters of the jihadis, was one of the main targets of the Indian Air Force. The impact is reflected in the deep crater

India responded quickly to the terrorist attack at Pulwama with an air strike which involved seventeen fighter air craft of the Indian air force which penetrated deep into Pakistan territory and destroy jihadi camps. The risk of nuclear capable Pakistan striking back is a strong possibility

The news of early morning action in the skies above Pakistan was broken, almost in real time, by the Pakistani side at 5:12 am IST with a tweet by its military spokesperson, Maj General Asif Ghafoor.
What he said was brief and cryptic but the dramatic import was hard to miss:
“Indian Air Force violated Line of Control. Pakistan Air Force immediately scrambled. Indian aircrafts gone back. Details to follow.”
Though India had used limited air power during the Kargil war, not since the 1971 war have Indian and Pakistani air force planes squared off against each other over Pakistani territory — so it was clear that something major had just happened.
Exactly what, though, is a matter of confusion and dispute.
His next tweet, at 7:06 am, said the intrusion occurred in the “Muzaffarabad sector”. He identified “Balakot” as the place where the IAF jets dropped their “payload”, ie bombs, when they were met with “a timely and effective response” from the Pakistani air force.
Finally, after posting pictures of damage by ordnance in an undefined wooded area, Maj Gen Ghafoor tweeted at 9:59 am that the intrusion by the IAF “within AJK was 3-4 miles”. AJK, or Azad Jammu Kashmir, is the name Pakistan gives to Pakistan-occupied Kashmir.

In a brief, prepared statement, Indian foreign secretary Vijay Gokhale said at 11:30 am that the Indian target was Jaish-e-Muhammad training camp at “Balakot”.
He described the strike as “non-military pre-emptive action” against the Jaish in the face of “credible intelligence” that the group was preparing more fidayeen for terrorist strikes in India.
He did not refer to the Indian Air Force or use the term air strike, describing what had happened merely as “an intelligence led operation” against a key Jaish facility. He did not refer to the location struck as being in “Pakistan” or PoK though he did say “information regarding the location of training camps in Pakistan and PoJK has been provided to Pakistan from time to time.”

There is a Balakot in the Pakistani province of Khyber-Pakhtunkhwa, west of PoK, and an attack there would mean IAF planes managed to fly a considerable distance – the town is around 70 km from the LoC – and return safely to base. How deep the ingress was is not known, as the Mirages can fire surface-to-air missiles from a distance.
Even if they were not able to successfully hit the intended target, as Maj Gen Ghafoor implied, the ingress alone would be considered a major military embarrassment for the Pakistani side.
There is, however, also a Balakot just across the Line of Control and Maj Gen Ghafoor’s last tweet implied that this was the place where the ordnance was dropped.
However, if the Balakot referred to by Gokhale is indeed the village along the LoC, it is not clear why any terrorist camp there needed to be hit by an air strike involving a crossing of the LoC since it could easily be hit from the Indian side.
Off the record, speaking on background, Indian officials are confirming the Balakot hit was in Khyber-Pakhtunkhwa after all. That location is also consistent with the use of the phrase “Muzaffarabad sector” by the Pakistani military spokesperson.
IS THE Indian action LEGAL OR tantamount to war?

International law gives countries the right of self-defence but there is less clarity about pre-emptive self-defence. Countries like the United States and Israel have invoked this right. This is the first time India has formally spoken of it.
The official statement after the September 2016 surgical strikes also spoke of “very credible and specific information which we received yesterday that some terrorist teams had positioned themselves at launch pads along the Line of Control with an aim to carry out infiltration and terrorist strikes in Jammu & Kashmir and in various other metros in our country”.
However, that action took place “along the LoC”, in Pakistan-occupied Kashmir, which is legally Indian territory. The implications of pre-emptive self-defence were not the same as they may be now, as Balakot is inside Pakistan proper.
India’s statement and the reference to the action as “non-military” makes it clear the Indian side has no intention of escalating matters to war. Much now depends on how Pakistan reacts.
At least one Pakistani analyst, Mosharraf Zaidi @mosharrafzaidi, saw the choice of Balakot in KPK as meaning India “has attacked Pakistan”.
“Just to be clear: #Balakot is not in Azad Kashmir. If Indian Air Force planes dropped payload in Balakot, they crossed across the LOC, and then across the entirety of Azad Kashmir, and then into Khyber Pakhtukhwa.
India didn’t “cross the LOC”.
It has attacked Pakistan.”

According to the Indian foreign secretary, in this operation, a very large number of JeM terrorists, trainers, senior commanders and groups of jihadis who were being trained for fidayeen action were eliminated.
The Pakistani side insists “no casualties or damage” was caused.
If the Indian claim is correct, it is not clear why a large number of terrorists would be gathered in one location — especially a well-known one whose existence Indian intelligence had publicly acknowledged — when it was clear that India was likely to hit back in the wake of the Pulwama incident.
One possible explanation is that the Pakistani military assumed Indian action would be confined to kinetic operations along the LoC or inside PoK, rather than elsewhere in Pakistan.
In the absence of authentic, verifiable information, Indian television channels are claiming that “300-400 terrorists” were killed in the operation.
Reuters reported from Balakot that villagers heard four bangs and that one person was injured. “We saw trees fallen down and one house damaged and four craters where the bombs had fallen,” said Mohammad Ajmal, a 25-year-old who visited the site, the news agency said.
In a tweet, the office of Pakistani Prime Minister Imran Khan said it “strongly rejected [the] Indian claim of targeting an alleged terrorist camp near Balakot and the claim of heavy casualties. Once again [the] Indian government has resorted to a self serving, reckless and fictitious claim.”
The 2016 surgical strikes were followed by fierce militant attacks at Nagrota and Sunjwan, and of course the Pulwama suicide bombing on February 14.
How effective the Balakot strike will be is hard to assess, but since terrorist groups are structured and operate differently from regular military formations, the Jaish and others are likely to continue posing a threat to India — especially if the trend of attracting local recruits in Jammu and Kashmir continues.

The Pakistani denial of any damage having been caused by the Indian Air Force might allow the situation to run like a replay of the September 2016 surgical strikes, which Pakistan denied had even happened.
Denying any Indian claim of inflicting damage allows the Pakistani side to avoid a military retaliation or escalation.
Maj Gen Asif Ghafoor @OfficialDGISPR tweeted pictures saying “Payload of hastily escaping Indian aircrafts fell in open.”
Of course, in his briefing last week, Maj Gen Ghafoor had warned India that Pakistan intended to “dominate the escalatory ladder”.
The Indian statement also uses carefully chosen words aimed at tamping down the possibility of military retaliation: “… this non-military preemptive action was specifically targeted at the JeM camp. The selection of the target was also conditioned by our desire to avoid civilian casualties. The facility is located in thick forest on a hilltop far away from any civilian presence.”
In his first statement to the Pakistani media, Pakistani foreign minister Shah Mahmood Qureshi called the Indian action “grave aggression”. He also said that Pakistan had the right to self-defence and that Prime Minister Imran Khan had called for a meeting to discuss the situation.
The National Security Council meeting chaired by Khan declared that “India has committed uncalled aggression to which Pakistan shall respond at the time and place of its choosing”.
A meeting of the National Command Authority in Pakistan has been called — this is the apex body which exercises command and control over the country’s nuclear stockpile — as has a joint sitting of the Pakistani Senate and National Assembly.

There has been widespread global condemnation of the Pulwama terrorist attack on the CRPF convoy, but there is little appetite in the region or the world for a military confrontation between India and Pakistan.

The keyboard war being fought online has been swinging wildly. Intitially those cautioning against violence were treated as pariahs and labelled ‘anti-national. However, the February 27 escalation and capture of Wing Commander Abhinandan Varthaman turned the tide and sent #SayNoToWar trending

On Tuesday, February 26, after the Indian Air Force (IAF) struck targets in Pakistan and across the Line of Control in Kashmir, social media trends in both countries reflected a mix of celebration, anger and a gung-ho readiness for escalation — even to war — between the nuclear-armed powers.
On Twitter, users who cautioned against war, or called for peace, were aggressively trolled and silenced.
“It was incessant yesterday,” journalist Shilpa Rathnam told The Wire, “ranging from mild reprimands saying the timing of my tweet isn’t right, to outright MC-BC abuse.”
By Wednesday, however, the contesting claims that both countries shot down each others’ aircraft — and eventual videos proving the capture of an IAF pilot, alive and relatively unhurt – seem to have shifted the wind.
The press briefing held by the Ministry of External Affairs (MEA) at 3:15 pm on Wednesday, confirmed that, early on February 27, the Pakistan Air Force targeted Indian military installations and consequently, one Pakistani aircraft was shot down by a MiG 21 Bison of the Indian Air Force, which later fell within Pakistan’s territory. However, in the said aerial engagement, India lost one its pilots — now identified as wing commander Abhinandan Varthaman, purported to be in the custody of the Pakistan Army

Videos purportedly of Wing Commander Abhinandan Varthaman – being pulled from an angry mob by Pakistan Army soldiers, then upright and blindfolded in captivity, then drinking tea – put the first human face on the costs of a possible war.
On Twitter, around 2 pm on Wednesday, #SayNoToWar began to trend in both India and Pakistan – as those who opposed escalation found their voices.
The hashtag peaked at around 4:30 pm, appearing on tens of thousands of tweets, rising to #3 nationally in India (after #Abhinandan and #BringBackAbhinandan) and #1 in Pakistan (after #PakistanStrikesBack). Also trending at #5 in Pakistan was the hashtag #PeaceNotWar. It also trended globally, climbing as high as #3 (#Abhinandan was at #2).