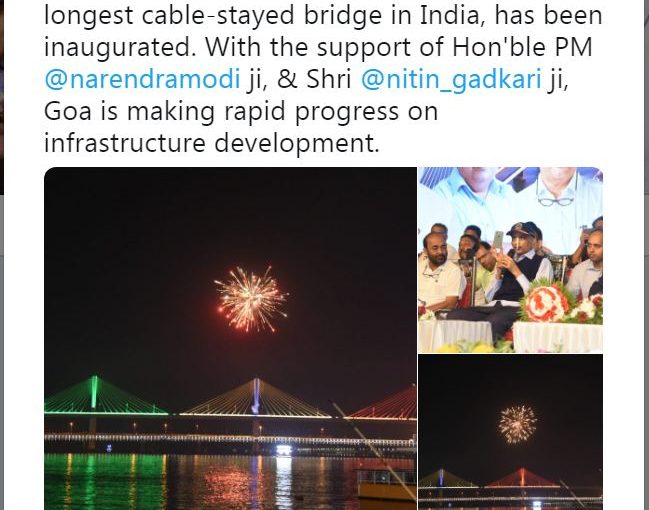 DETERMINATION: Manohar Parrikar’s mind is still strong as shown by his insistence on inaugurating the Atal Setu Bridge over the Mandovi river which is his baby

It is not for love or respect for Parrikar but because of vested interests that Manohar Parrikar is being kept alive. The State government wants him alive because they know without him the government will collapse. Narendra Modi knows that if he removes Manohar Parrikar he may be exposed on bribes he took in the Rafale aircraft scam

Manohar Parrikar who has been suffering from pancreatic cancer for over a year was admitted to the Goa Medical College Hospital on the night of Saturday, February 23. After some minor discomfort (bleeding according to informed sources) he was shifted to the GMC on the excuse that the ventilator at home was not working. It is entirely possible that there was a power cut, as happens in all parts of Goa, as somebody might have damaged the power cables to his residence-hospital.
Obviously the problem was quite serious because on Sunday morning a team of doctors from the All India Institute of Medical Sciences (AIIMS) led by Promod Garg, Prof. of Gastroenterology and associate dean under whom Parrikar had taken treatment in the AIIMS earlier, rushed to Goa. According to Health Minister Vishwajit Rane, Dr Garg has changed some medicines and the chief minister is now stable.
In probably what is a paid ad in the Times of India asking people not to heed rumours about the Chief Minister’s health, a health line has been presented. It was on Valentine’s Day last year, February 14, 2018, that Manohar Parrikar complained of a stomach infection and was admitted to the GMC. It was found to be much more serious than just a stomach infection and he was shifted to Lilavati Hospital for treatment under Dr Jagannath, who is a specialist in pancreatic cancer. It was in Lilavati that it was diagnosed that Manohar Parrikar was suffering from cancer of the pancreas, which is in most cases fatal, particularly if it is identified at a very late stage as in the case of Parrikar. Parrikar spent a week in the Lilavati hospital. In his bravado he returned to Goa on February 22 to be present at the Assembly to present, or rather go through the motions of presenting, the budget, but for barely two minutes.
On March 8, 2018 Manohar Parrikar was taken to the Sloan Kettering cancer hospital in New York in the United States by a special aircraft for treatment. He spent almost three months in the Sloan Kettering — March 8 to June 14. Parrikar returned to New York’s Sloan Kettering for further checkups which was widely understood as further doses of chemotherapy. There are also rumours that some new experimental drug was tried on him. Obviously the experimental treatment had an adverse effect on him. Parrikar who had returned from Sloan Kettering on June 14, 2018 had to be rushed back to US on August 9, 2018. Every time his visits to the US were called checkups. Surely you do not need to go three times to the United States just for checkups!

In any case Parrikar who went to the US on August 9 came back to Goa on August 22, 2018. The very next day he developed complications and was admitted for a “health review checkup”. Why he should be admitted to Lilavati for a health review when he just returned from the best hospitals in the world, Sloan Kettering in New York, only the Chief Minister’s Office can explain. After spending a week at Lilavati (August 23 to August 30, 2018) Manohar Parrikar was taken back to the US for treatment.
He returned to Goa on September 6, 2018. When he had gone to Parra to participate in the Ganesh festivities he allegedly started bleeding. He was rushed to his relative’s hospital in Candolim. The hospital belongs to relatives of his late wife and is called Dr Dukle’s Hospital & Research Centre. Dukle’s, which is basically a maternity home, could not do much for the pancreatic patient.
The next day September 15, 2018 Manohar Parrikar was airlifted to Delhi where he spend a month in AIIMS. Parrikar returned to Goa on October 14 but did not go to his bungalow, but to rented accommodation which had been converted into an ICU. A senior cardiac surgeon from the Cardiology Department of the GMC was also posted to his ICU at home on a 24-hour basis.
Though Parrikar was diagnosed with pancreatic cancer on February 15, 2018 it was seven months later that Health Minister Vishwajit Rane revealed that he was suffering from pancreatic cancer and spending peaceful time with his family.
By that time Parrikar could not eat normally and had to be fed through a food pipe passed through his nose. Despite his extreme pain and discomfort Parrikar could not stop worrying about whether his pet project, the third Mandovi bridge, would be completed in time. On January 1, 2019 Parrikar visited his office in the Secretariat. On January 27, 2019, he inaugurated the Atal Setu — the name given to the new Mandovi bridge — in the company of Union Transport Minister Nitin Gadkari.
On January 30, 2019 Manohar even presented the first ever digital budget in the country. He was obviously so exhausted that he had to be rushed to AIIMS again on January 31, 2019, the day after he presented the budget. He returned to Goa on February 15, 2019. Unfortunately he did not celebrate Valentine’s Day as his condition worsened. On February 23, he was admitted to the GMC for upper GI endoscopy. This is a procedure which I have undergone dozens of times, whereby a flexible tool is pass through the mouth to check the state of internal organs like the liver, pancreas, gall bladder, etc, which cannot be seen through an ultrasound.
Ironically, Health Minister Rane who knows nothing about health except making money, denies an endoscopy was performed. Indeed Rane has dismissed Pradeep Naik who was dean until recently, and appointed Shivanand Bandekar, who was previously suspended for corruption as Head of the Orthopaedic Department.