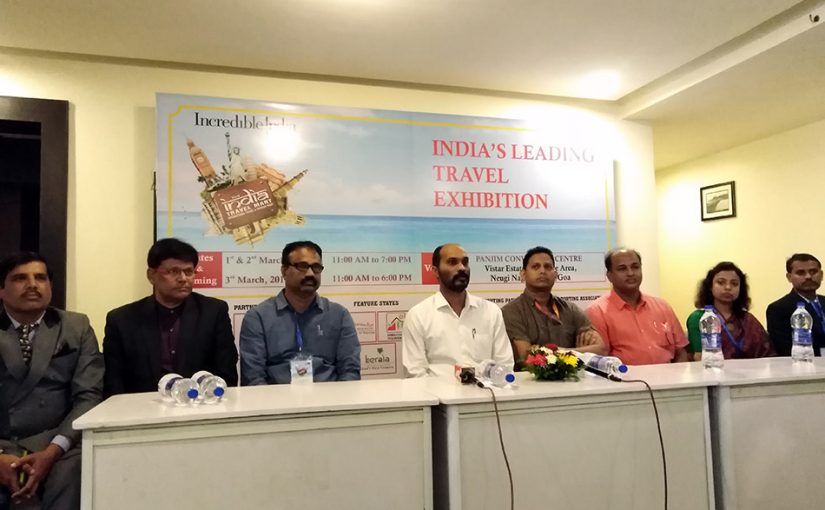 Where would you like to run away this summer? Let some of India’s leading travel and tourism representatives at the 3-day India Travel Mart (ITM) exhibition currently on at the Panjim Convention Centre at Mala, Panaji, help you. Here are colourfully seductive brochures and useful advice if you’re planning a holiday in Kerala, Karnataka, Rajasthan, West Bengal, Gujarat, Mysore (now Mysuru), Jharkhand, Bihar or any other place — especially in India. Director of Tourism Sanjiv Gadkar inaugurated the 3-day exhibition on March 1, 2019, with the wish that all India’s states “will do better and get some more tourists.” According to him Goans are great travellers and merrymakers. Picture shows him addressing a press conference with visiting tourism stakeholders.

Huge destruction of mangroves and trees is going on at Bastora and this highly condemnable. This is not something new for Goans who’re watching their green cover disappear in chunks nowadays. It has become routine for “miscreants” to put fires everywhere — probably for expansion or widening of roads and especially highways at the behest of the builders lobby. But why to worry about far away places, we have such fires daily from the stretch between Miramar to Dona Paula Road and that too in our own backyard.
Our local experts are least interested about what is going on close to our territory. Once upon a time there were people who stopped trees from being cut down and especially the huge trees in Campal which were embraced and saved.
One huge tree was poisoned some months back at Nelson Cabral’s footpath and there is no trace of it, even the roots were put to fire by workers. NIO staff and scientists passed by and saw the flames but not one person took enough interest to lodge a complaint. What a pity trees do not have a voice!
Now I see other three trees almost dead. I suspect it’s the job of somebody be it at the instructions of the Tourism people or locals anxious to eliminate trees for widening the small road going up to Apna Bazaar for the purpose of creating a parking lot or bus shelter for tourist vehicles. If three trees are cut you will get a big entrance for vehicular traffic into this area and they’re already on the job of leveling and providing shelter, plus retaining walls in the plan. Where is the approach road and why first of all make this area for traffic congestion? Will local environmentalists and those from Bastora and Colvale come to our rescue. I doubt.
— Stephen Dias, Dona Paula

RIBANDAR WOES
Even some villages in Goa are much better off than Ribandar. Ribandar has for decades been demanding a football ground, a community hall and a proper market but these long standing demands of Ribandarites are yet to be fulfilled. We do not have a children’s park or a garden or a public library and there is lack of proper sanitation all over, with garbage strewn everywhere. Erratic power and water supply is the order of the day. And for Fonduvem Ward of Ribandar even the dead are denied a proper crematorium to rest in peace.
In August 2017 amongst mountains of assurances Chief Minister Manohar Parrikar while luring us for votes had promised the residents of Ribandar that he would ensure within three months medical services and facilities at the old Goa Medical Hospital at Ribandar. The assurances have ended up like China made goods, without warranty or guarantee. Over the years while our MLAs and Municipal corporators have risen from rags to riches our Ribandar remains stuck in the dumps.
— Aires Rodrigues, Ribandar

POLITICAL BEGGARS!
As per Wikipedia: Political corruption is the use of powers by government officials or their network contact for illegitimate private gain. Forms of corruption vary but include bribery, extortion, cronyism, nepotism, parochialism, patronage, influence peddling, graft and embezzlement.
Corruption may facilitate criminal enterprise such as drug trafficking, money laundering and human trafficking, though this is not restricted to these activities. Misuse of government power for these activities. Misuse of government power for other purposes, such as repression of political opponents and general police brutality, is also considered political corruption. India is rife with this kind of corruption today.
Which of the above is absent in Goa? None. Everything happens here. No prizes for knowing who is the master of repression of political opponents using government power! Take time to see the ramifications and you will see how honest, law abiding people are not only coming a cropper but we also tend to consider it inevitable. We are not able to socially boycott corrupt people. Does it mean that all of us are part of this corruption?
To get any permission/clearance, even to build a compound wall on your own property, you need to oil their hands. You cannot be an ostrich, and think this is a necessary evil. Why do you need to applaud, greet, be pally with these people.
Just imagine a football match where the referee has been bribed. Will we keep quiet? No. So why are we different in life? Truly, Goa needs to re-define bribery. When one must bribe to get “by rights” work done is it bribery? Even to get a government job which should be yours by right of ability, you still have to bribe the politician! This must not be called bribes but political alms to political beggars. Just see the mentality: Young graduates, who studied for 16+ years are made to pay lakhs of rupees!! To top this they shout out that Goans don’t want to work!
Locals are second class citizens in Goa, they are not vote banks and hence not given land/illegal housing. Their reasons for corruption is desire for govt jobs, Portuguese passports, etc. Migrants are policitians’ vote banks and have already been given Goan land free, voters and ration cards. They now demand jobs and are changing their names to local names.
Locals get a few mtrs of land around their homes to build illegal extensions. Migrants get whole new land and dwellings. We need to stop taking peanuts from local politicians. The person whom you look up to, to whom your go to solve your problems is selling out.
— R Fernandes, Margao