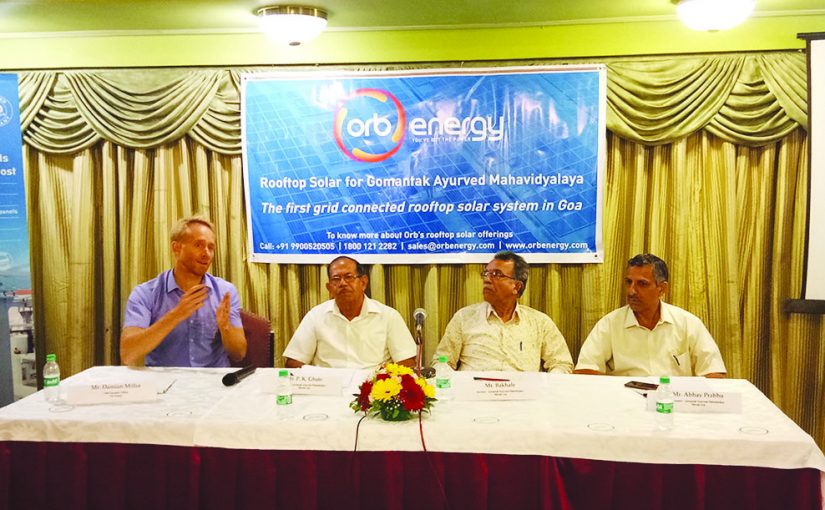 By Our Special Correspondent
The Gomantak Ayurved Mahavidyalaya Institute in Shiroda is breaking new ground by investing in solar energy. It now has what is seen as Goa’s first grid connected rooftop solar system and from the sound of it many folk are going out to Shiroda to have a look and check out its credentials!
The 30 kilowatt rooftop solar system was installed by solar professionals Orb Energy over three months is this is now expected to save electricity billing to the tune of 1.5 lakh per annum. This means they will be harvesting energy practically for free for the next 25 years and excess production of power sold back to the government grid. It’s a first pioneering investment of its kind with government subsidy and President P K Ghate of the Gomantak Ayurved Mahavidyalaya & Research Centre, speaking to media people on March 15, 2019, commented that in India we needlessly tend to be blind when it comes to going for something new, at the GAMRC they don’t want to be guilty of this sin and he is proud to announce that theirs is the first rooftop solar system synchronized since the Goa government’s net metering policy came in to effect, “Thanks to Orb, we currently expect to produce an average of approximately 50,400 units of clean solar electricity per year, and expect to save around1.5 lakh per annum in electricity costs.” For the institute which gets a monthly power billing of 15,000 it will soon be practically zero billing and that’s something to think about. The story is that investing in solar energy is not cost effective but says Damian Miller, Orb’s chief executive officer, rooftop solar is now cheaper than grid electricity and solar electricity is less than3 per unit with a 3-4 year payback on average. He expressed surprise that in a state like Goa which enjoys so much sunshine around the year industrial estates and business houses have not thought reaping the sun’s energy. According to him solar power costs has come down by almost nine fold in the last 10 years in India, “What was 180 per watt energy is now20.”
In long term perspective it makes sense to invest in solar energy. Present at the press conference was Dilip Sahakari of the Institute of Engineers (Kolkotta) and he opined that obviously more “education in society” is required, for people to be convinced that solar power is a good way to go. In fact, no subsidies are required to go for solar power and “green energy” should be institutionalized for the returns are so generous.