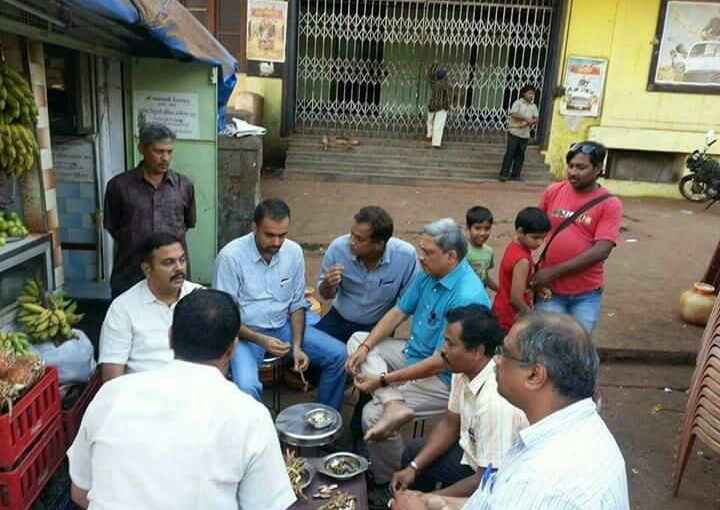 UNHYGIENIC: Parrikar the common man was very fond of eating ros omelette and roadside food, particularly from the gados near Alankar Cinema

Manohar Parrikar could have converted Goa into a Ram rajya as he wanted to build a Ram temple in Ayodhya, as part of the RSS delegation to Ayodhya which demolished the Babri Masjid. But Parrikar was blinded by his obsession for power and Hindutva. An obsession which followed him to death as the funeral pyre did not go up in flames for quite some time despite repeated efforts…

There was a stage when I considered Manohar Parrikar a friend. There is no denying that he was a competent and honest politician. Unfortunately, his honesty did not prevent him tolerating unlimited corruption to hold on to office. The man who was initially reluctant to enter politics, towards the end was desperate to hold on to his chair. For a whole year Manohar Parrikar who had been diagnosed with pancreatic cancer, the most deadly of them all, would not give up a single one of his 20 key portfolios, let alone step down from the chief ministership. Even a peon would not have been allowed to stay in office going by the medical rules of the government.
Even in death it seemed that Parrikar did not want to leave his beloved people. Repeated attempts at lighting the funeral fire failed. It took a good ten minutes for the flames to shoot up and take his soul to parlok.
It cannot be denied in retrospect that Parrikar was not only a hard core RSS pracharak but also totally intolerant of any opinion other than his own. He was the sanjantawala. His colleagues often complained that when they tried to argue or present their case he would dismiss them claiming that he already knew about it.
I met Parrikar for a first time soon after he was elected MLA from the Panjim constituency in 1994. Parrikar who was an excellent PR person had made friends with all the reporters in the press room which was located on the ground floor of the secretariat at the Adil Shah Palace in Panjim. My former colleague, who subsequently became Parrikar’s press advisor, Julio D’Silva, bought him to the Herald office where I worked. Used as I was to dealing with illiterate and uneducated politicians I was impressed by his grasp of the issues that Goa faced. I was equally impressed that he had refused to join the RSS yatra from Diwar island to Delhi to protest the celebration of the 500th anniversary of the arrival of Vasco Da Gama.
Perhaps Parrikar, the IITN who had an B Tech in metallurgical engineering and would have made a very good research scientist, had already realized that he needed the support of the Catholics if he was to realise his ambition of becoming chief minister of Goa.
Parrikar came across as well-read, competent and concerned about Goa. A true Goenkar indeed, except for traces of his fundamental tendencies which initially he suppressed.
When Parrikar became the chief minister for the first time after he toppled the Sardinha government, he came straight to my underground basement flat in Dona Paula where I toasted him with wine. In the first month of his chief ministership he invited Tara and me twice to dinner at the restaurant-annex of the International Centre. The only other person present was Abhijat, his younger son, who is now in trouble facing charges in the eco-tourism scam. He was then just about ten and went every where his father took him.
On both occasions to our surprise the restaurant at the International Centre subsequently sent the bill to us at home because (as I learnt after I questioned Parrikar) the International Center wanted a grant of `1 crore and he’d assumed that they would not charge us!
Later, during his second tenure as chief minister, I discovered he was a pathological liar. The water pipeline and the sewage of Neptune hotel had got mixed up, contaminating water supply in the whole area leading to a dengue epidemic in Panjim. Parrikar ordered the closure of all restaurants including the venerable Bhosle, Tatos and Café Real, where Goans used to go for breakfast and tea. He even ordered the shutting down of all the gaddos at Miramar beach and elsewhere, including the Bhaiya Pav Bhaji who was then near National Theater Panjim.
At that time Tara and I were at a function at the O’Coqueiro restaurant in Porvorim when someone mentioned that even while Panjim was battling dengue, Parrikar continued to eat at a road side gaddo near Alankar Cinema in Mapusa. We decided to catch him in the act and drove down to Alankar Cinema to see if the chief minister was indeed there. The story was that after working late, Parrikar would arrive to have ros omelette for dinner at the Alankar road side gaddo before going to his house at Mapusa. He never stayed the night at the official chief minister’s bungalow. We just missed him but his favourite gaddo owner boasted about how he waited every night for the chief minister before packing up.

Farewell my friend, you meant well but were blinded by your ambition and your ideology!