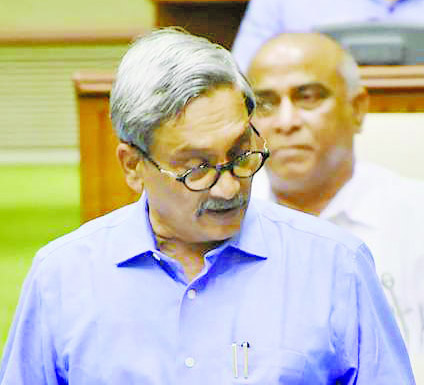 STUNT: To woo voters Parrikar abolished the VAT on petrol and introduced schemes like Laadli Laxmi and the anti-inflation allowance called Griha Aadhaar

As everyone pays homage to Manohar Parrikar, Gavin Alvares shares a thought-provoking postmortem on the man behind the mask of good governance and shows us the other side of the story…

Basic governance and prompt delivery of services is possibly the biggest failure of this IIT degree-brandishing alumnus as witnessed in the myriad queues outside various government offices for birth, death and marriage records or vehicle and licence renewals.
The run-around for a land mutation can take months if not years, with multiple trips to the authorities and “baksheeh” liberally dispensed.
When it was disclosed that his son Abhijat Parrikar, had his own land mutation of a vast tract of land done in a single day, Manohar Parrikar played the privilege card, arguing rather disingenuously and rhetorically and in the most ridiculously absurd manner, that if the CM’s son could not get a mutation done quickly, then what would be the plight of the common man? His son’s illegal conversions and ad-hoc planning permissions now face court scrutiny, in an upcoming legal challenge.
When he was finally diagnosed with a mysterious “pancreatic ailment” he promptly admitted himself to the prestigious Lilavati hospital in Mumbai and then to the Sloan Kettering Cancer Center in New York for treatment, all funded by the tax payer.
The Goa Medical College where lesser Goans are normally admitted, was not good enough. It has only a very basic, semi-operational oncology department with the barest minimum of staff and virtually no equipment.
Indeed, as a knee jerk reaction to his own illness, his government finally appointed an oncology HOD who was yet to take formal charge, as late as May of 2018.
The cynical design behind the move, is that Parrikar wanted no one to point fingers at him for neglecting the GMC oncology department whilst he admitted himself into the best and the most expensive.
After all, was he not the ultimate Mr Simple — one of us, the ordinary down-to-earth Goan — untucked bush-shirt, chappals and all??
DRAMA
The shenanigans and drama surrounding his illness; which was described by BJP flunkeys variously as mild indigestion, stomach upset, and a pancreatic ailment; was a showcase of deceit and deception that rivalled the best in the erstwhile Soviet Union.
And in the midst of it all, was a seriously ill Manohar Parrikar, clinging on to power, refusing to let go the chair that he annexed against the mandate of the people.
He soldiered on stubbornly, neglecting governance, whilst selling out to every conceivable vested interest, jeopardizing forever Goa’s future as a viable State and irreparably harming the interest of its people. Refusing to give up power when he was quite clearly incapacitated, and nearing death, he made a final mockery of the people of Goa with his inability to abdicate the CM’s chair, hiding behind the tired old tale of “coalition politics”.
In the end, Manohar Parrikar was unable to accept or digest the fact that he; a legend in his own lunchtime; was a total, miserable, complete and utter failure as the Chief Minister of India’s smallest state.
By condoning corruption the way he did, Goa’s Mr. Clean finally became, by design, by his inaction and his silence, one of THEM.
I refuse to weep for Manohar Parrikar. Rather, I weep for the quintessential soul of Goa, that he has played a large part in destroying.