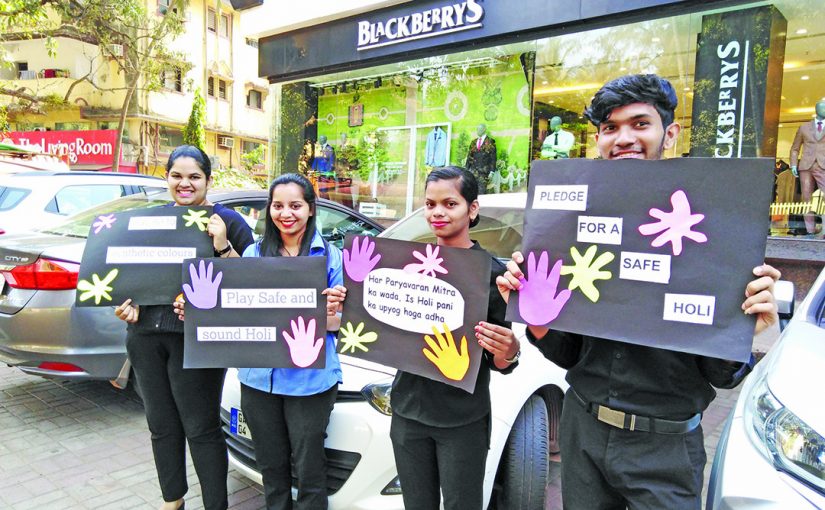 APPEALING FOR AN ECO-FRIENDLY HOLI

These group of students working with a Tata campaign were standing outside Caculo Mall on Holi day, Thursday morning (March 21), carrying placards for all to read and hopefully pay heed to…don’t use chemical powders, don’t throw water balloons, no pistols with dyed water please! `Burra na mano, Holi hai!” is okay for Hema Malini in Hindi films but in real life it can be injurious to life. Have a non-injurious happy Holi! (Pic by Pankajbala R Patel)

The Aam Aadmi party congratulates Dr Pramod Sawant on assuming office of the chief minister of Goa. We welcome his statement that he will follow the concept of Antyodaya to ensure that his government takes care of the very last person. We assume this means the villagers of Sonshi will now get drinking water, students in the mining belt will be able to attend school, the farmers of Mopa will get their rightful dues, ordinary Goans will be able to afford houses, hinterland hamlets will get electricity and roads, slum growth will be eradicated, the youth of Goa will get jobs, public transport system will be reliable and affordable, etc.
Otherwise the statement of the new chief minister will remain a hollow claim and count as his first u-turn as chief minister! AAP also finds the appointment of two deputy chief ministers a complete travesty of established norms. The BJP has reduced constitutional posts to gambling chips like the ones used in the casinos proliferating in the Mandovi. If coalition circumstances require, will the BJP now start appointing deputy ministers in various departments to satisfy the never ending avarice of their MLAs?
Ever since the BJP hijacked the 2017 election mandate along with Goa Forward & MGP, we at AAP have maintained that coalition has nothing to do with Goenkarponn but everything to do with greed. At that time the alliance parties had claimed that their shocking decision to join the BJP government despite campaigning intensely against it was based on the sole condition that Manohar Parrikar would be CM, and their recent statements also reiterated that their support was only until Parrikar was CM.
The “saashtaan namaskar” of Vijay Sardesai and Sudin Dhavlikar to their Delhi bosses Shah and Gadkari, has shamed Goans and proved that AAP is right in calling this new government an opportunistic coalition of corruption.
— Pradeep Padgaonkar, State Secretary, Aam Admi Party, Panaji

U-TURN MEMORIAL?
Why not a U-shaped memorial to remind us of all of Manohar Parrikar’s U-turns?
— Dr Francisco Colaco, Margao (as shared on Facebook)

VIKAS PURUSH!
SO sad! One era ends. It will take decades to have a leader with vision like Manohar Parrikar! Tears are rolling just thinking of my time with him during his first stint as chief minister and especially during the first International Film Festival of India. Holi will never be the same again in the absence of my friend Manohar bab! Still my wishes to all my other friends and foes equally on the auspicious day and season of Holi. May God make everyone’s life e colorful and healthy!
— Dr Shekhar Salkar, Panaji

BOTTOM LINE
Politicians are public figures, and in death one cannot say that one must speak only good of them when they pass away.
The day after the passing away of the sitting CM, I noticed a large advertisement from a mining company extolling the ‘honesty’ of the former! This company has been consistently dishonest in its activities even with the extreme dust pollution of Surla demanding location of the dust sensors at their specified locations! Honesty was not the hallmark of the former as seen by the illegal miners being granted leases despite the SC ruling and the resultant stoppage of mining.
Just as fair skinned people are unduly benefitted for no reason but their skin colour, so also highly educated people like IITians. So, we see today undeserved accolades showered on him with a sprinkling of a few deserving ones.
One must look at the bottom line: red or green? Blackmail is a sleazy and cowardly crime and says it all. Parrikar used this to the hilt either threatening to file cases or actually doing so but never concluding the same. He used the Income Tax Dept. to blackmail others. His victims continued as sitting MLA’s either in his own party or the opposition allowing such scoundrels legislate over us! This is despicable. Is this red or green? If red, then by nature of this crime, the entire report must be red.
His other red mark is the various U turns he has made earning him the sobriquet of U turn Master. He was then taken to the Central Ministry. What were the qualities the BJP at the Centre required from him? Ask any Service personnel and they will tell you Surgical Strikes existed long before credit was placed at his door. So, what exactly they required from him? It was this character of his: blackmailing. We saw how the Press and Media were either bought or blackmailed into submission. Income Tax has been hounding the Opposition. I believe his main purpose was to counter the AAP at Delhi: pit an IITian against another. Delhi Administration was brought to a standstill and ‘credit’ cannot go just the Amits’ and Rajnaths’ alone. Was there any other contribution of his at the Centre? No.
He always said Goans could not compete with others but did nothing to solve the problem.
How was the Goan CM different? Why did he allow a coal hub in Goa, giving up of our Rivers, widening of village roads instead of making new remote Highways? To favour Adani, a crony Business partner of the PM, one who has a high risk of going bankrupt. Why was the Rafaale agreement changed to favour Anil Ambani, another company on the verge of bankruptcy? Till today, is there anyone who can say why the new Mandovi Bridge was so high? Why no opposition to the new CRZ notifications which can not only kill Tourism in Goa but Goa as well? Why did he allow Karnataka to divert water that can kill th Mandovi and Goa? Why the cancellation of Good Friday and St. Francis Xavier Holidays? Did he live up to his IIT qualifications? So what did he do for Goa besides favouring Gadkari, Adani and Vedanta? These failures make for a red bottom line.
— R Fernandes, Margao