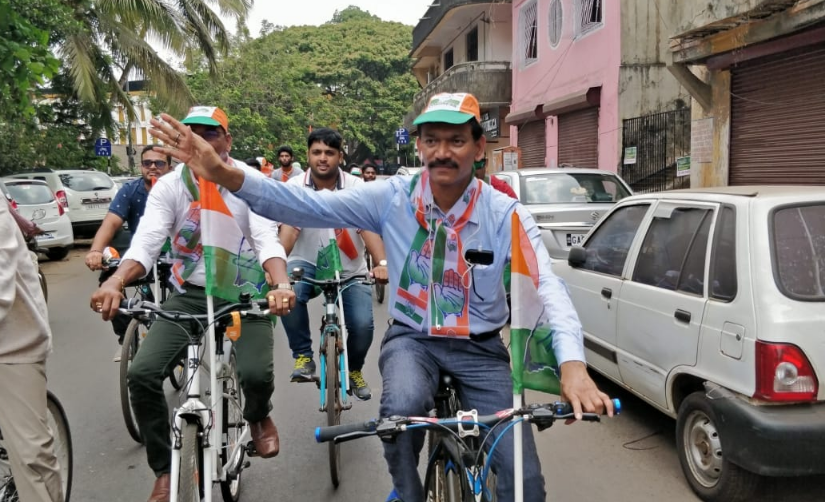 WAY TO GO GIRISH BAB! Here is Congress’ North Goa’s LS candidate Girish Chodankar on a cycle yatra in Panaji to catch voters’ interest. Perhaps to remind them that Congress is better and more eco-friendly! He is possibly inspired and taking a leaf out of Netherlands’ Prime Minister Marek Rutte who also commuting and communicating with the Dutch people on a bicycle (the Dutch PM had presented Prime Minister Narendra Modi with a bicycle if you remember). This is to say Girish Chodankar is one of Congress’ most enduring faces and was recently nominated to contest Lok Sabha polls coming up. He was accompanied on his cycle yatra rally by enthusiastic supporters from People’s High School, through Mala, Fontainhas, Church Square, St Inez, Tonca, Miramar and Caranzalem

The AAP has lambasted BJP for the series of political events which are selfish business interests to destroy the future of Goans. When AAP declared Shekhar Naik and Yogesh Khandeparkar as AAP candidates, Siddharth Karapurkar in his opening remarks at a function drew parallels with the mythological story of Krishna advising Arjun to attack the Kauravas to wipe out evil. The present set up in the country and Goa is similar: The Kauravas have to be defeated so that a real aam aadmi’s government can replace the BJP.
Regarding AAP candidates I would like to inform readers that Shekhar Naik is a well-known social worker from Mapusa and he has a good following, he has raised several issues touching the lives of common people. Yogesh Khandeparkar is a maths teachar with 32 years experience, he joined AAP about two years ago. Both candidates were selected on the basis of inputs received from AAP volunteers in the respective constituencies.
In the meantime, AAP convenor Elvis Gomes observes that the BJP of being a party which keeps daggers by its side all the time. These daggers are used to stab their “friends” at any moment! We are all witness to the late night dramas being enacted regarding swearing in MLAs from other parties — the BJP wants to survive at all cost. From the time BJP aligned with Francisco Sardinha and broke the Congress, the BJP has been surviving by using and discarding MLAs as per the party’s need to survive.
Perhaps the current BJP government BJP should get its machinery to work for people at night so that public work may be disposed of at night itself, “Government sleeps during the day and is setting a new trend of working during the night for crony capitalists! If it seriously works during night time for the people all public worked would be disposed quickly….”
AAP also objects to the construction of a building by Captain of Ports on the river Mandovi to house casino offices. Activist Dr Joe D’souza along with AAP leader Valmiki Naik strongly condemn this work going in violation of Supreme Court directions on noise pollution at night time and are contemplating filing a contempt of court application before the High Court if police fail to take act.
— Pradeep Padgaonkar, State Secretary, Aam Admi Party, Panaji

CASINO RIVER NOW!
AS a social worker the “casino-isation” of river Mandovi in Panaji bothers me seriously. The Mandovi river waters are now toxic and unsuitable for recreational swimming, fishing or water sports. Fish caught in the river Mandovi have high levels of pollutants and is unfit for consumption. Those who work or play in the river waters are prone to infections of the eyes and skin.
The formalin in fish issue has yet to be resolved.
I blame the BJP government in Goa for being responsible for the pollution in the river Mandovi. The off shore casinos are releasing untreated sewage in the river and in addition there are irresponsible acts of releasing bilge and oily residues from the casinos and their support boats. Coliform bacterial is alarmingly high and the Goa State Pollution Control Board is aware of this.
Despite all this no action is taken! Casino traffic also increasingly hinders other traffic on the main road of Panaji with haphazard parking of vehicles by casino visitors. Pavement space is encroached on by vehicles and promotional boards of all kind, creating a clutter on public space meant for pedestrian use. In the late evenings pedestrians are forced to walk on the road with heavy traffic moving. Does the BJP government care about the peoples’ safety in public spaces in Panaji or anywhere else?
— Advocate Diya Shetkar, Panaji

Political prostitution sponsored by the BJP
The Anti-defection law came into force in 1985 to deter the evil of political defections by legislators motivated by the lure of office and monetary gains. The intent of the law was to prevent corruption by way of horse-trading.
Our Goa may be India’s smallest State but it has been in the news for all the wrong reasons. We have shown the nation ways and means to circumvent the Anti- Defection law, with political prostitution and party turncoats at its very hilt. Nothing more needs to be said on the crude manner in which the BJP deviously post midnight engineered a split in the MGP.
On March 16th 2017 at the instance of those maneuvers by then Chief Minister Manohar Parrikar, the wily then Valpoi Congress MLA Vishwajit Rane resigned just minutes after taking oath and joined the BJP which necessitated a fresh election in that constituency unnecessarily burdening the tax payers.
Manohar Parrikar through his strong arm tactics after desperately trying to get some more MLAs to also similarly resign and defect was able to finally get Dayanand Sopte and Subhash Shirodkar to join the BJP.
Such political bandits and others who may decide to follow suit should be politically castrated and dispatched to oblivion for taking the people for a ride. On 23rd April the voters of Mandrem and Shiroda need to ensure that these awful political rogues Dayanand Sopte and Subhash Shirodkar are consigned to political wilderness. What Goa is witnessing is a Jamboree of political prostitution sponsored by the BJP with all their money and muscle Power. Even those in the world’s oldest profession do it better.
— Aires Rodrigues, Ribandar

CANDIDATES ABIDE BY SOLEMN PLEDGE
Candidates aspiring to become Members of Parliament and the three MLAs for the by-polls in Goa must be busy formulating their election manifestos for the 23rd April elections with their respective parties. Since these public elected representatives are going to hold office for five years and the remainder of the Legislative Assembly tenure respectively, unlike as seen before when election manifestos promised a great deal but hardly anything had been fulfilled, it should become necessary now for all election manifestos to carry a solemn pledge. The pledge could be worded as follows: ‘I do hereby solemnly pledge that to the best of my ability, I shall strive to fulfill whatsoever has been promised in my election manifesto. Knowing that I will hold public office, I shall always remember that I am the elected representative and that I owe allegiance to the people who have voted me to power. I shall also in particular affirm that unfinished tasks of my predecessor shall receive my fullest attention. I solemnly state that whatever has been mentioned in my manifesto can be accomplished during my tenure. I shall not indulge in corruption and horsetrading.’
A pledge of this nature could lead to streamlining of the process of manifesto formulation and make it easier for the electorate to monitor the performance of the elected representatives. In earlier elections most of the manifestos have not translated into deeds across all parties and candidates. This time round such an eventuality should not occur.
— Elvidio Miranda, Panaji

MIGRANT MENACE
A group of youngsters under the banner of “Revolutionary Goans” have rightly started a movement to expose the illegalities and to stop the ongoing destruction of most villages at the hands of migrants in Goa. Migrants who have come in large numbers in search of jobs/employment are indeed proving more like a big curse as they are slowly finishing our hills, springs, wells and are spoiling the beauty of most villages of Goa by constructing their own houses/structures illegally not just on hills but even in agricultural fields in collaboration of our elected MLA’s and Panch members. And to matters worse, some are slowly seen flexing their muscles by illegally holding two voting cards, roaming in gangs with knives, indulging in murders, robberies, rapes in broad daylight and terrorising Goans.
I think that if we really want to stop the menace of migrants then we should immediately force the government to shut down all the industrial estates of Pilerne, Karaswada, Verna, Madkai, Bhetora, Khorlim etc and also the hotel industry which is mostly run by outsiders as 80% jobs are offered in such industries not for Goans but for these neighbouring migrants as they work even for peanut salaries.
Anyway, three cheers to the multi-talented body-builder/poet/nature lover, Shri Ramesh Ghadi, the founder member of “Save Saligao” for rightly starting a mass awareness movement and for trying to expose the ongoing destruction at the hands of migrants in collaboration of some of our own money-minded greedy individuals of our Saligao village. Keep going my friend Ramesh Ghadi and God bless…. Keep up the momentum and let the fight go on…. Let’s save Saligao/Goa for our future generations…..
— Jerry Fernandes, Saligao