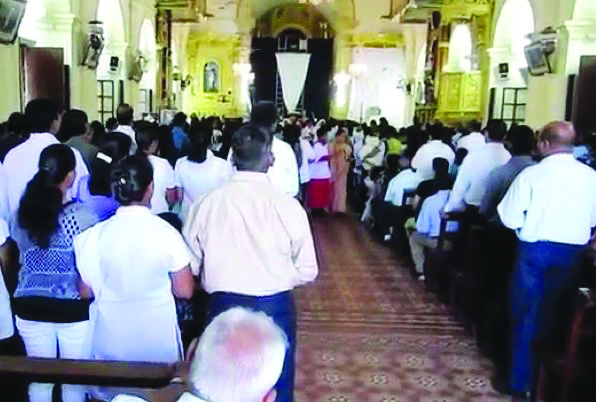 CONCERNED: With Holy Week fast approaching, Catholics are extremely concerned about the sudden ‘attack’ on Good Friday in the Union Territories

Goan Catholics and Catholics across the country were shocked by the latest attempt to hamper their religious observances. For the first time in the country’s history, two Indian territories have abolished Good Friday as a national holiday. These are Dadra and Nagar Haveli (Dnh) and Daman and Diu, both former Portuguese colonies on the west coast of the country.
Bishop Theodore Mascarenhas, general secretary of the Indian Bishops’ Conference (CBCI), said, “This is very very sad. A clear discrimination is being practiced by the administrator. We appeal to all including the administrator of these Centrally administered territories to respect the sentiments of the people and to avoid their divisive methods”.
The bishop went on to explain that the cancellation of Good Friday as an official state holiday is even more serious because “only two Christian feasts are public holidays. Earlier there was an attempt to declare Christmas as Good governance day”. Christians, he adds, “are a small minority in the area. But that is exactly the reason why their rights must be respected”.
Specifically, the local authorities downgraded the Type 1 celebration of official holidays published in the Gazette (Schedule 1 of Public Holidays) to Type 2 in the restricted category (Schedule 2 Restricted holiday category). This means that while previously banks, schools and public offices remained closed, from now on employees will have to request leave. However, such leave will be at the discretion of the employer and as schools will remain open, children will not have an option.
Local Christians do not understand the reasons that prompted the authorities to cancel the holiday. Priests and religious leaders have written an appeal to the district magistrate and the central government. Bishop Mascarenhas declared he had also written to the Union Home Minister Rajnath Singh to intervene and withdraw this notification.
In the past, the secretary of the Catholic bishops remembers a similar attempt: the government wanted to declare Christmas as Good Governance Day to remember the birthday of former Prime Minister Atal Bihari Vajpayee. “It failed because the majority community stood by us. I hope and pray and I am quite confident that the majority community will once again stand by us and nullify the discriminatory acts of a small fundamentalist divisive people “.
Representing the community, Mr Anthony Francisco Duarte, from Moti Daman, Daman, has filed a public interest writ petition in the Bombay High Court which came up for hearing on Thursday, April 11, 2019, before Chief Justice Pradeep Nandrajog & Justice Jamdar of Bombay HC. Mr Haresh Jagtiani Sr Adv appeared for Petitioner.
The court asked the counsel for the respondents how such notification making Good Friday a restricted holiday was passed.
The State counsel however was not able to satisfactorily answer the court and time was given till Monday, April 15, to come with a proper reply.
The Christian community residing in the two former colonies is composed of about 100 thousand people; in Dadra and Nagar Haveli there are seven churches, in Daman and Diu four. The faithful learned of the removal of the holiday, as preparations began for the Good Friday party, which this year is celebrated on April 19. In the same period there will also be general elections for the re-election of the Government and the Lower House of the Indian Parliament (Lok Sabha). The vote in the two territories is set for April 23.

MCC WILL NOT INTERFERE WITH SOCIAL & RELIGIOUS FUNCTIONS

Chief Electoral Officer (CEO) Kunal has assured the public that social and religious functions which are part of the local customs and traditions will not be hampered by the model code of conduct (MCC) that is effective in the state.
“Model code of conduct does not come in any way between celebration of local social and religious customs and traditions. We have unanimously resolved that there will be not be any obstruction, disturbance or annoyance to any celebration that has been happening in the temples or in the churches” said the CEO.
The issue was raised in the all party meeting with the EC on April 11, 2019.
Flying squads will be suitably briefed about this the CEO added and also asked those having grievances to contact the 1950 control room and get them resolved. He also asked political parties to refrain from using religious functions for political propaganda