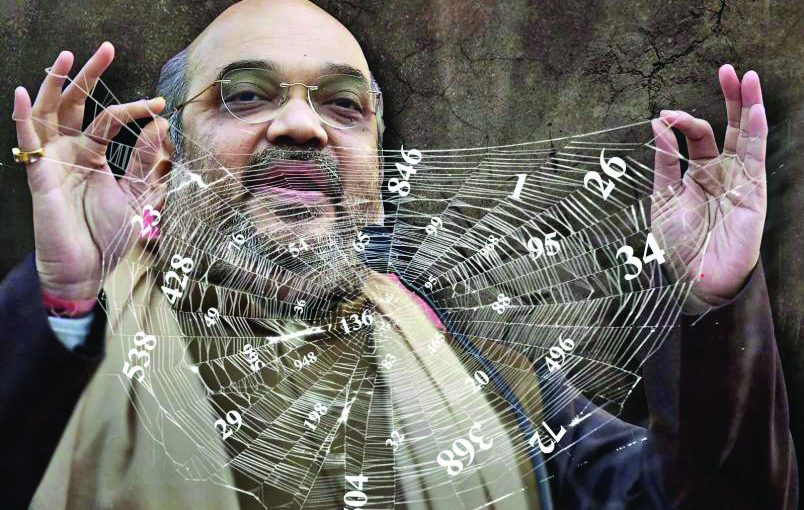 HIDE THE TRUTH: The BJP has learned that the best way to deal with unpleasant facts is to ignore them and hide them from others. Hence their efforts, largely successful, to deny, delay, discredit, and destroy any data or reports that do not show them in a positive light

A group of 108 economists and social scientists have sounded a pre- election alarm over the Narendra Modi-led Bharatiya Janata Party government’s move to revise or withhold the release of unfavourable or “uncomfortable” economic data.
“For decades, India’s statistical machinery enjoyed a high level of reputation for the integrity of the data it produced on a range of economic and social parameters,” the economists from institutions ranging from the Massachusetts Institute of Technology, University of California, Berkeley and Harvard University to Jawaharlal Nehru University, Delhi University and the Indian Statistical Institute, wrote in their appeal.
“Lately, the Indian statistics and the institutions associated with it have however come under a cloud for being influenced and indeed, even controlled by political considerations.”
They emphasised the fact that economic statistics are a public good and it is a vital necessity for policy-making and informed public discourse in democracies where citizens seek accountability from its government. Therefore, “it makes it imperative that the agencies associated with collection and dissemination of statistics like Central Statistical Office (CSO) and National Sample Survey Organisation (NSSO) are not subject to political interference and their work therefore, enjoys total credibility.”
The economists termed economic statistics as a “public good” that was vital for policy-making and informed public discourse in democracies where citizens seek accountability from their governments. The economists cited the government’s GDP data as one key troublesome area. First, they said that the figures released in 2015 with the new base year of 2011-12 were problematic as they “did not square with related macro-aggregates.”
Thereafter, the economists said, each successive GDP data release had come with associated problems, especially the latest data for the demonetisation year of 2016-17, which revised growth upwards by 1.1 percentage points to 8.2%.
The signatories include Abhijit Banerjee, Pranab Bardhan, Jean Dreze, James Boyce, Jayati Ghosh, Amartya Lahiri, Sudha Narayanan, Ashima Sood, Jayan Jose Thomas, Vamsi Vakulabharanam among others.

Modi is vulnerable over his economic record in the run-up to the polls starting on April 11. In particular, a failure to meet promises to create enough jobs for the million Indians entering the labour market each month, looms large over the BJP. The Modi-BJP Government’s decision to withhold the release of the National Sample Survey Organisation’s (NSSO) employment survey for the year 2017-18, despite the nod of the National Statistical Commission (NSC), has worsened it’s case.
The survey would have shown a record high unemployment rate, but instead the government said that jobs’ data had not been finalised.
In December 2018, the schedule for the release of results from the Periodic Labour Force Survey (PLFS) of the National Sample Survey Organisation (NSSO) was not met. This was the first economy-wide employment survey conducted by NSSO after 2011-12 and was therefore deemed important, the letter pointed out.
Following this, two members of the National Statistical Commission, including the acting chairman, subsequently resigned because they felt the NSSO was delaying the release of the report, though the NSC itself had officially cleared it. Subsequently, news reports based on leaks of the report showed an unprecedented rise in unemployment rates in 2017-18; this perhaps explained why the Government did not want to release the report. There have since been news reports that the PLFS of 2017-18 will be scrapped altogether by the Government, the economists noted.
The government has also been criticised for its new back series GDP data that drastically lowered growth rates during the regime of the previous UPA government. In January this year, for instance, the Central Statistical Offices’ revised estimates of GDP growth rate for 2016-17 (the year of demonetisation), shot up by 1.1 percentage points to 8.2%, the highest in a decade! “This seems to be at variance with the evidence marshalled by many economists” the press release stated.
According to the open letter, in 2018, two competing back series for varying lengths of time were prepared – separately by two official bodies, (a committee of) the NSC and later by the CSO. The two showed quite opposite growth rates for the last decade. The National Statistical Commission numbers were removed from the official web site and the CSO numbers were later presented to the public by the Niti Aayog, an advisory body which had hitherto no expertise in statistical data collection
The numbers released by the NITI Aayog were in complete divergence from the numbers arrived at by a sub-committee of the NSC.

The statement said this situation was different from the past wherein India’s statistical machinery enjoyed a high level of reputation for the integrity of the data it produced on a range of economic and social parameters.
While official data was often criticised for the quality of estimates, there were never allegations of political interference influencing decisions and the estimates themselves, it said. In fact, now any statistics that cast an iota of doubt on the achievement of the government seem to get revised or suppressed on the basis of some questionable methodology.
They signatories to the open letter urged all professional economists, statisticians, independent researchers in policy — regardless of their political and ideological leanings — to come together to raise their voice against the tendency to suppress uncomfortable data, and impress upon the current and future government authorities, to restore access and integrity to public statistics and reestablish institutional independence and integrity to the statistical organisations.
The letter concluded stating, “the national and global reputation of India’s statistical bodies is at stake. More than that, statistical integrity is crucial for generating data that would feed into economic policy-making and that would make for honest and democratic public discourse.”