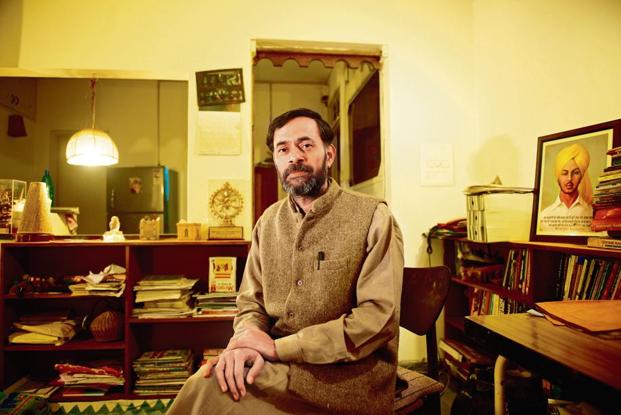 ASSAM BILL: The Assam bill to create a national registered of citizens was ostensibly to throw out refugees from Bangladesh, but selectively targets only Muslims, not Hindus

The Citizenship (Amendment) Bill, 2016, which aims to provide citizenship to people forced to seek shelter in India because of religious persecution or fear of persecution in their home countries, has led to incidents of violence in the North-East. The bill, which primarily aims to help Hindus, Sikhs, Jains, Buddhists, Parsis and Christians from Afghanistan, Pakistan and Bangladesh, was passed by the Lok Sabha but could not be taken up by the Rajya Sabha in the winter session. In an interview, national president of Swaraj India Yogendra Yadav said the bill goes against the idea of India, and brings back the two-nation theory. Yadav spoke about the repercussions of the bill, the Assam Accord, and the implications of the bill on the country.

Q. How do you see the citizenship amendment bill?
It is perhaps one of the most pernicious bills to be ever introduced in the Indian Parliament. It is a bill that goes against the Indian Constitution, the very idea of India. For the first time in the history of Indian republic, our citizenship is being defined in religious terms. This goes against Article 15 of our Constitution that says you cannot discriminate on the basis of religion. More than that, it goes against the very foundation of our Republic. India was formed by a partition and the idea that caused India’s partition was the idea of the two-nation theory — That Muslims should have a separate nation called Pakistan and Hindus should have a nation called India. Our Constitution and our national movement rejected it. India was not for Hindus. So, it is a fundamental attack on the very idea of India. It is a theory that was endorsed by Jinnah and incidentally by Savarkar as well. I am shocked beyond belief that something like this could be passed in any House of Parliament. It is the duty of every Indian to oppose it.

Q. The bill is still pending in the Rajya Sabha. What according to you could be the repercussions of this? How does it affect the Assam Accord?
There are two kinds of repercussions — one in the North-East where primarily migration occurs and secondly, for the whole of the country. Once religion is recognized as the basis of citizenship, then it is the first step towards introducing two kinds of citizenships in the country. This could be the first step towards formalizing what has been happening informally in the last four-five years. Once this formality begins, this is a beginning of a road to a Hindu nation which is exactly what the Bharatiya Janata Party’s (BJP’s) dream is.
In the case of the North-East, it has special dimensions. It would mean a breach of the Assam Accord of 1985 where it was promised that those illegal migrants who entered India after 24 March 1971 will be detected and declared as foreigners. That promise is broken. If broken, the relationship of Assam and other North-eastern states with the rest of the country, that thread is weakened. The protests that we have witnessed all over Assam, in Tripura…. We have seen governments who have rejected the bill. The other states may not have accords but they have had massive migration. Basically, what this law says is that you are alright if you are Hindu. They don’t need to worry about papers. Every resident of the North-East, including the Hindus, are the ones who fear this. We are risking peace in the North-East and are being unjust to them. And to do this just to gain traction in one parliamentary election… Nothing can be worse than that.

Q. Do you see this as an attempt to polarize the North-East?
I don’t think the BJP is unaware of the implications of this in the North-East. The name of the game is this that while you risk a few seats in the North-East but ignite the Hindu-Muslim fault lines, then it would benefit us in Uttar Pradesh, Bihar, Rajasthan.
BJP knows that they will have losses in Assam because they have lost an alliance member. BJP’s main support in Assam are Bengalis. If Assam can be made their laboratory and they can ignite fire there, then you can get dividends in the rest of the country. This is something that should be described as seditious. It is risking the unity of the country and is a conspiracy against the nation.

Q. The citizenship bill comes at a time when the process of National Register of Citizens (NRC) is also ongoing. Do you see this as a case of religious discrimination?
It is not surprise that it comes with NRC. What NRC, which originally comes from the Assam Accord, if properly implemented should do is weed out those who came to India after 24 March 1971. This includes Hindus as well as Muslims. Estimates say that of the 40 lakh, 25 lakh are Muslim Bengalis and 15 lakh are Hindu Bengalis who have been put in that potentially foreigner category. What this bill does is rescue those 15 lakh Hindu Bengalis. It would mean that they are no longer illegal and would legitimize their cases. What it does is opens a backdoor exit for all of them. They will escape the NRC which will then become only a Muslim witch-hunt exercise which is not what the Supreme Court wanted. It is not what the Assam movement wanted. NRC exercise has suffered for eternity. There have been ground-level discrimination allegations. What this would do is open a formal legal route for all the Hindus to escape and every Muslim to be nailed. It is not just religious discrimination. I am surprised and shocked how few Indians have taken interest in this. This potentially alters the character of our nation.

Q. In such a situation, what is the way forward?
The bill should be stopped in the Rajya Sabha. Either it should not come before the Rajya Sabha or should be put to scrutiny in the upper House. The Rajya Sabha is meant to protect the interests of the states and all the North-eastern states should come together. If it is passed, I cannot imagine how the Supreme Court can allow this to remain because it goes against everything in the Indian Constitution. The fact that it has been passed by the Lok Sabha has done such deep damage and has sown seeds of distrust. The sooner this bill is stopped the better. The protests also need to come from the entire country and not just minorities.
Q. The Citizenship (Amendment) Bill was taken up in the Lok Sabha along with the quota bill…
BJP has always been clever and smart about the publicity aspect… Be it diversions, pushing things when no one notices. It is not possible for the North-East not to notice. People there are bound to notice this and that is evident from the protests there. This bill has been lined up from the last two years but has not received the kind of attention it should.

Q. President Ram Nath Kovind gave his assent to the quota bill on Saturday. Your thoughts?
I see this as another exercise that Congress had undertaken in 2013, just before the Lok Sabha elections, in the case of Jat reservations. Everyone knew it would not stand judicial scrutiny and was passed because no one wanted to take the blame. At the end of the day, the bill was rejected by the Supreme Court and Congress was rejected by the people. I suppose something similar could well be the case. The Constitution amendment may survive. Though people with better understanding of law say that it goes against the basic structure of the Constitution… Even if it does, the kind of reservation that the government proposes with the ceiling of `8 lakh cannot stand any scrutiny.