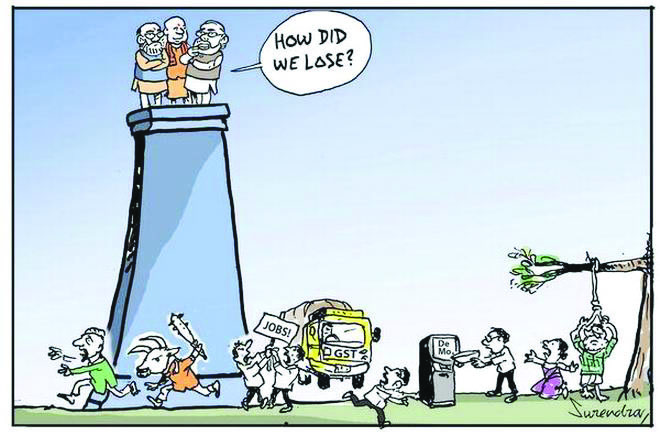 Despite the governments attempts to falsify and manipulate data, diligent research will still bring to light the many failures. Crimes by gau rakshaks, ‘romeo’ squads, the messed up implementation of GST, rising unemployment, the burden of DeMo, rising prices, farmer deaths, etc — the litany of the NDA government’s failures can seem unending. Elvidio Miranda highlights some of the government’s proven failures…

The elections to the Lok Sabha are underway and Modi’s NDA government is about to complete 5 years in office. It thus becomes important to lay out bare the performance of the Narendra Modi government both in terms of the world view as well as the credible opinions of National data generating agencies in bringing to light the sins of omission and commission of the incumbent government.

India is now suffering from the highest unemployment rates in 45 years according to the NSSO data. Unemployment is a direct effect of the flawed GST regime that imposed relatively high tax rates of 5%, 12%, 18% and 28% which have greatly impacted in particular the medium and micro enterprises which have been faced with the prospect of closure due to high rates of taxation. Even several correctional measures taken up later especially due to the nearing of elections has not been able to restore employment generation, this too since the Make In India’ failed miserably. The World Health Organization (WHO) has reported that 10 most polluted cities in the world are in India, with the air quality of our major metropolises having high emissions of greenhouse gases such as carbon dioxide, carbon monoxide, nitrogen oxides, sulphur dioxide and particulate matter. The government have not been able to introduce in a large way electrical vehicles in part because there is a very strong petroleum companies lobby that are averse to the introduction of electrical vehicles. A Global Wealth Report has indicated that India is now the World’s second most unequal country with women being underpaid and men still enjoying above par salary structures. Discrimination against women is still prevalent in India despite 70 years of Independence. Market data impresses upon the point that the Indian Rupee has become the worst performing currency in the world with the Indian Rupee having reached a record low of73 to the American dollar. No other currency has depreciated so much in such a short span of time. This denotes that the Indian rupee is susceptible to depreciation both due to internal factors as well as external reasons.
India has also become the world’s third worst country in environment protection as the extent of deterioration of the environment has not been tackled. Important among these is the high rates of emissions of greenhouse gases as well as the pollution of all of our major rivers due to discharge of industrial wastes, a direct result of improperly planned developmental works carried out in India which has become a major cause that has not been fulfilled for the preservation of natural resources.

Intolerance and religious extremism is the highest in 70 years in the country since the NDA government took office at the Centre.
It has been reported by India Spend Data that the highest number of cow related violent incidents and mob lynching on record occurred after Modi became the Prime Minister of India. Control on mob violence was a major failure of the Modi government in the Centre. Law and order situation in the country was never worse than in the five years of the Modi government.
Unprecedented media curbs have been placed on the print as well as the electronic media which has turned out to be a body blow for the right to freedom of expression as a fundamental right. The media has also been muzzled to a great extent during this period of the NDA’s rule. Criticism of the government has been labeled as anti-national’ by the BJP. A Thomas Reuters Survey conducted has found that India has become the world’s worst country for women. The high profile case of Nirbhaya shook the conscience of India and even later a number of sexual assault cases on women were reported. Safety of women was a major area which the government had failed to implement. Women probably were not so very safe during the NDA governance. It has been alleged that the current prime minister is the least accountable Prime Minister in 70 years and is the first PM not to have given a press conference in his entire term. His only interaction with the common people has through the programmeMaan ki Baat’ which is almost a monologue or only restricted to questions not averse to him.
It is the first time that in the history of India, autonomous institutions such as the Central Bureau of Investigation and Reserve Bank of India have not been allowed to function and has been mired in controversial interference by the government. Also, during the NDA rule, the Income Tax Department, the Enforcement Directorate and the National Investigation Agency were targeting political rivals of the NDA.
It is also pertinent that for the first time in the history of India, four Supreme Court judges addressed a press conference in which they expressed the fear that `Democracy is in Danger’. Such an event never occurred earlier in the history of India.

CRONY CAPITALISM – ONLY THE RICH GET RICHER

According to Credit Suisse Report, India has the Highest Income Inequality in 80 years with equal pay for equal work not having been satisfactorily addressed by the government . This has led to greater inequality of income and the gap between the rich and the poor having widened.
Also for the first time top secret defence documents pertaining to the massive Rafale fighter deal were stolen from the Defence Ministry office in order to expose underhand dealings. As in case of all previous defence deals, payment of commission or otherwise kickbacks were always reported, but the NDA government is not ready to concede despite the fact that ex-President Francois Hollande and French newspaper Le Monde indicated that huge amounts might have been paid to an Indian company.
Add to this the fact that demonetization has not been able to unravel black money and the exercise led to the deaths of 105 people, as well as the Public Sector Banks (PSBs) having shown huge NPAs and thus the government-owned banks showing as of now that at least 17 PSBs are at a loss and not paying dividends for at least the last two years, and that except for oil marketing companies (who made profits due to the low prices of crude oil) PSUs have invariably shown high amounts of reduced profitability.
The NDA government, despite the Supreme Court having ruled that the Aadhaar Card is not mandatory, has effectively made the use of the Aadhaar Card compulsory for linking to Bank accounts, mobile numbers and Demat accounts as well as mutual funds. This runs contrary to the spirit of the ruling of the Supreme Court that the Aadhaar is voluntary since it contains the bio-metrics such as the iris scan as well as the fingerprints.
Another broad observation that is very significant is that despite Sensex and Nifty having reached record highs, the valuations of most companies — except multinationals and a few private companies — has actually fallen considerably due to the impact of the GST implementation. Also as of now due to bad performances of mid-cap companies, investors in mutual funds have been mostly incurring losses in their hard-earned money.
From the number of failures of the NDA government on all fronts, we must deduce that the performance of the government at the Centre has not been at par with expectations and thus it is for the Indian people to decide whether the NDA is worthy of being re-elected, or whether any other party such as the UPA, BSP-SP combine, Trinamool Congress or the YSR Congress should be given the reins of power since it is expected that they will be able to govern India in a better manner that will benefit the majority of Indians.
The NDA got their chance for five years and now it is time for a change of guard at the Centre, so that a better government is installed that can meet the aspirations of a majority of the people of India.